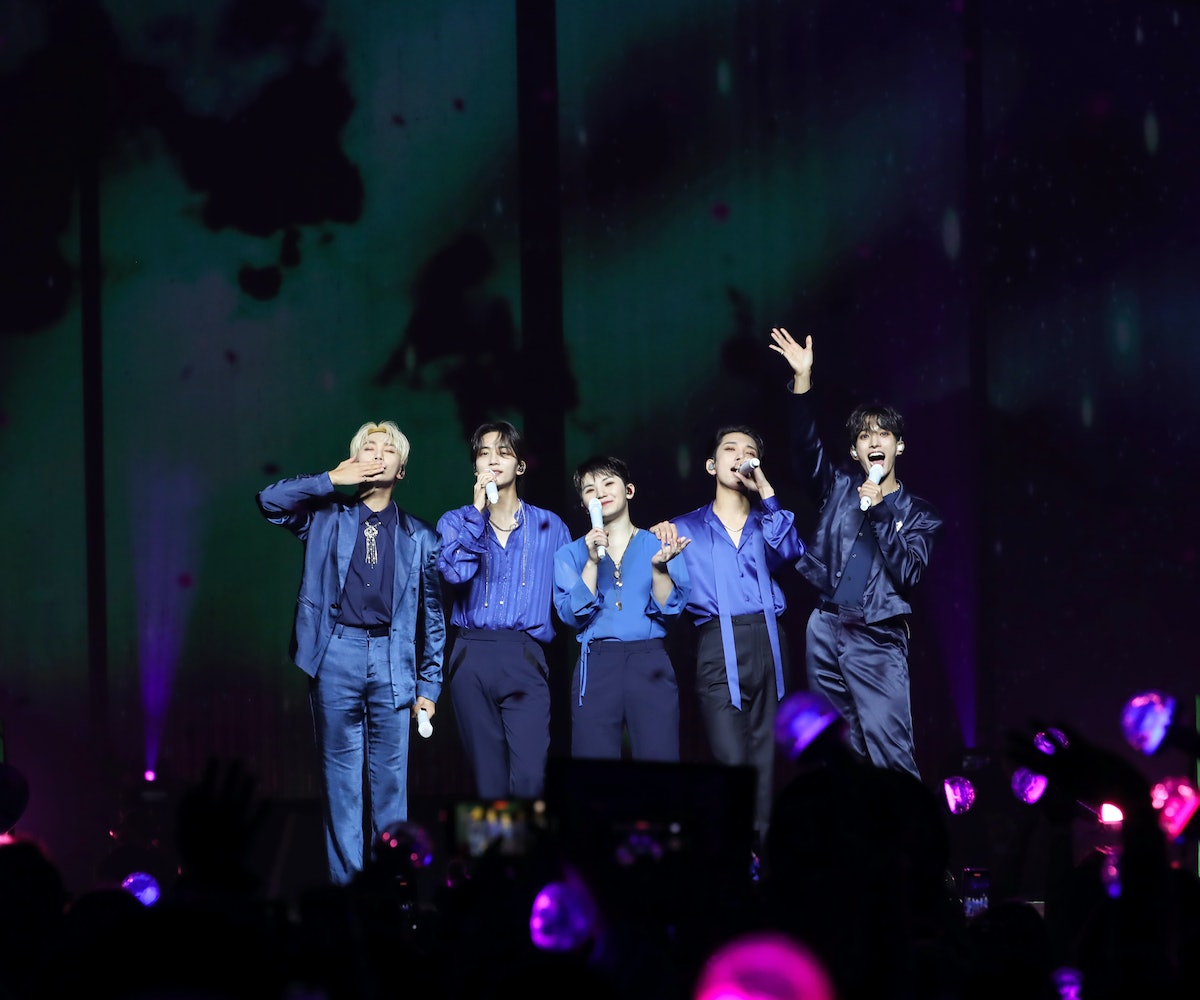 Seventeen ended the North American leg of their Be The Sun world tour on a high note. Many high notes, in fact. As thousands of fans screeched the lyrics of their encore song "Aju Nice" well into the evening on Sept. 6, they filled the entirety of Newark's Prudential Center with the kind of buoyancy and fervor only the 13 members of Seventeen can inspire.

In recent years, the Korean group has become one of the industry's top acts, selling millions of albums worldwide and selling out arenas from Seoul to Los Angeles. If you were lucky enough to be one of the fans, called Carats, inside the Prudential Center Tuesday night — or in attendance at any of the group’s 12 previous U.S. tour dates — then you probably saw why so many are enamored with them. But if you weren't, don't worry. Below, NYLON rounded up the highlights from the incredibly energetic and very chaotic evening.

The reality of touring during a pandemic is the likelihood of testing positive for COVID-19 is never zero. Members Dino, Mingyu, Hoshi, and Joshua each had to sit out various stops of the tour because of it. While a group as sizable as Seventeen can afford to have one or two members absent and still maintain the integrity of their choreography and performance, the energy isn't the same when all 13 aren't together. For lucky fans at Newark, the group ended their U.S. tour as one complete unit — and the joy (and relief) emanating from the members was palpable to everyone in the arena. "We're so glad to be back as 13 for you guys tonight," Joshua told the crowd during his opening remarks.

As the night commenced, you could see glimpses of their impenetrable bond through playful ribbing and onstage antics: Joshua compared aqua-haired The8 to Squidward, and DK gave rapper Wonwoo a piggyback ride before accidentally hitting him in the nose. When all 13 are together, their dynamic is unmatched. As Hoshi, the group's resident hype man would, and did, say, multiple times, "No cap."

A Scorching Performance Of “HOT”

Seventeen set the mood for the show with their opening performance of "HOT." The sensual song, with its signature hip swivel and body roll choreography, when combined with the madcap energy of its production, ignited the arena — quite literally. At the end of the number, Hoshi emerged with a flamethrower, setting off actual flames on stage.

The Be The Sun world tour is Joshua's era. Ever since the L.A. native rejoined the tour last week after a brief bout of Covid, he's amped up the volume. The normally more mellow vocalist was bold and boisterous inside Prudential, prompting fans to chant his name; he energized the other members around him and exposed his toned biceps before a heated performance of "Crush” — nothing drives fans wild like an artist taking off their jacket. For his emo-adjacent "2 MINUS 1" performance with Vernon, he lived out his rockstar fantasies, mic stand in hand.

During Stateside promotions, Joshua is typically a bridge between the members and their North American fans, and he plays the part well. He helps get the group back on track when they stray off course, and he's often tasked with exposition: "We want to light your inner shadows," he said, explaining the title of their tour. So it's nice to see Shua let loose.

Dancers Hoshi, Jun, The8, and Dino in their shimmering white 'fits wreaked emotional damage under those beaming lights. For "Moonwalker," the performance team displayed striking elegance and incredible body control. Sporting bleach blond hair, Jun was a real standout, his movements as sharp and refined as his jawline. While synchronization has always been Seventeen's strength, the performance unit imbued their own styles onto their mini stage. During "Wave," one could feel Hoshi's power and precision; Dino's strength and charisma; The8's fluidity and bendy lines; and Jun's captivating magnetism. The quartet came together cohesively, delivering the night's most stunning performance.

"Imperfect Love" Was Anything But

The brilliance of Seventeen is that their vocalists have real pipes. The group's balladeers, Woozi, Jeonghan, Joshua, DK, and Seungkwan, performed "Come To Me" and "Imperfect Love," two heartfelt songs that are considerably more warm than hot, but watching Seungkwan and DK belt is somewhat of a religious experience. While the group's main vocalists showed off their stability and power, team leader Woozi delivered his signature riffs and runs, and Joshua and Jeonghan (looking like Howl Pendragon in a blue-purple blouse and with his dark hair pulled back in a ponytail) filled the arena with their sweet, honeyed vocals. Of course, that wasn't enough for Joshua, who asked the fans to join the final refrain of "Imperfect Love." It was a magical moment, watching thousands sing Korean lyrics together in harmony. One could even say it was perfect.

The hip hop unit, S.Coups, Wonwoo, Mingyu, and Vernon, brought their signature charisma and swagger to their performances of “Back It Up” and “GAM3 BO1,” the group's foray into hyperpop. Vernon and S.Coups made it look especially effortless as the stage magnified its futuristic sound with images of binary code, lazers, and a dizzying display of colors. During "Back It Up," Mingyu's exuberance was at an all-time high as the 6′ 2″ star bounced to the beat and hyped up the crowd, while quiet rapper Wonwoo unleashed his inner beast with his deep, growl-like flow. By the time the hip hop team left the stage, the energy inside the arena was thunderous. Seriously! The ground beneath my feet was shaking.

When you go to a Seventeen show, you're not just going for the music. You're also there for the theatrics. Seventeen acted out a full skit in the middle of their concert to signal the arrival of their lighter and more playful songs like "Mansae," "Left & Right," and "Aju Nice."

The stage transformed into a junkyard setting that only added chaos to the performance: Mingyu dribbled a basketball and rode a bike down the catwalk — nearly careening into DK; Vernon started singing Rihanna's "Work," which only prompted everyone else to sing along; During "Mansae," the group instructed fans to wave their hands at various speeds. "Go faster! Now, a lot more faster!”; To introduce "Left & Right," DK transformed into a drill sergeant. Most pop acts want to run away from their earlier work or retool it with modern sensibilities, but Seventeen embrace their original freshness with humor and a lot of fondness for their younger selves.

One of the best parts of the night had nothing to do with Seventeen at all. Before the encore, as everyone waited for the group to come back on stage, the cameras panned to fans holding signs and waving flags. Some of the highlights included signs that read: "Bisexuals and biracials for Vernon"; "JOSHY SEXYYYYY"; and a flag printed with a Joshua meme face that Seungkwan grabbed during the encore and proceeded to run with on stage. ("What the hell is that?" Vernon asked. Good question, Vern.) Seeing how the show incorporated fans into so much of the evening really showed how Seventeen treat their fans as equals.

The concept of performing the same song multiple times during an encore may sound strange, but for Seventeen it has become their legacy. For the closing night of their tour, Seventeen performed "Aju Nice,” their ultimate hype track, six times (seven, if you count the full performance earlier in the night), alongside "Darl+ing," "Our Dawn is Hotter Than Day," and "Snap Shoot," the latter of which inspired a lot of fan participation. (Shout out to Rose, the choir teacher whose vocal chords are as strong as DK's.) But "Aju Nice" is the definitive encore song. (Full disclosure: When I saw Seventeen perform in Seoul in 2019 for their Ode To You tour, they performed "Aju Nice" no less than 12 times. Members were laid out on the floor by the end, begging to leave the stage.)

The encore is when you see Seventeen at their most Seventeen: they run around like children on a playground. To be fair, as a group of international superstars selling out an entire arena, what stage is not a playground? To unleash your creativity, untamed energy, and enthusiasm for life — for three hours on Tuesday night, we were all happy to play along.

Seventeen On ‘Face The Sun’ & The Start Of A New Era