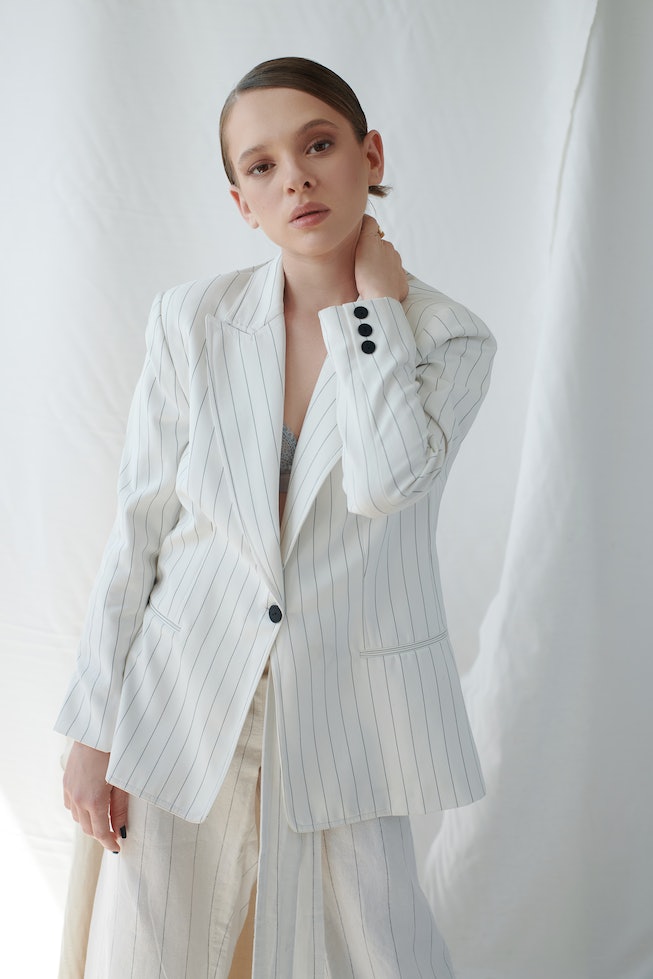 A few weeks ago, Shira Haas woke up at her home in Jerusalem, where she has been quarantining, to an overwhelming number of texts. “It is jarring to wake up to so many messages,” she recalls over Zoom. “It’s either really, really good or really, really bad.” In this case, it was the former: She had won Best Actress in an International Narrative Feature Film at the 2020 Tribeca Film Festival for her new film Asia. The 25-year-old was “thrilled” once she realized that all the texts and missed calls were congratulations. “I don’t know if people will believe me,” she continues, “but when I’m doing a project, I almost forget that people will see it.”

Haas should be prepared to expect another influx of congratulatory texts next month when the 2020 Emmy nominations are announced on July 28. Perhaps no show — Tiger King aside — captured the attention of newly quarantined masses as steadfastly as Unorthodox, which quickly garnered Haas rave reviews for her portrayal of Esty Shapiro, a Jewish woman seeking to escape her ultra-Orthodox Brooklyn community. If critics and early awards pundits are to be believed, Haas is a shoo-in for a Best Actress in a Limited Series slot.

“I like to watch shows that are different from my world and still see myself in them,” Haas says. “I think that’s part of why Unorthodox got so much love. People are curious to see something different than them, and are surprised that they can relate.” Born and raised in Israel, Haas has been acting since the age of 14 when she began appearing in local theater. In 2014, she appeared in her first film role as the lead in Princess, for which she was nominated for Best Leading Actress at the Israeli Academy Awards. She made her Hollywood debut in Natalie Portman’s A Tale of Love and Darkness and starred opposite Jessica Chastain in The Zookeeper’s Wife, but Unorthodox is her true breakout role, introducing her enormous talent to Netflix’s far-reaching audience. Haas was supposed to be in Los Angeles to promote the series before COVID-19 shut the world down, but the show became a hit nonetheless. “I’m a hugger, so I miss that in my life,” she says. “But [being home] gives you time to breathe and process everything.”

Similarly, Haas had planned to be in New York for Asia’s Tribeca premiere, before everything work-related turned virtual and the movie industry’s future became uncertain — including the release and distribution of Asia, which also took home Best Cinematography for Daniella Nowitz and the Nora Ephron Prize, awarded to a female writer or filmmaker with a distinctive voice, for writer and director Ruthy Pribar. The film, which is in the process of securing a U.S. distributor, tells the story of a young single mother, Asia, and her teenage daughter, Vika, who suffers from a degenerative motor disease that soon finds her wheelchair bound. As Vika, Haas delivers a gut-wrenching transformation of a defiant young teen grappling with her deteriorating body, as it manifests both physically and mentally. “Vika starts off tough and stubborn, but as the story goes on, she becomes the one who understands what is going to happen [to her],” Haas says. “I felt that she is ageless. Sometimes she is the typical 17-year-old, sometimes she is younger, and sometimes she is older. As I see it, it’s not a story about death, but a story about life. Those are my kind of stories to tell. It’s an intense subject, but I want to bring it to life.”

While Esty in Unorthodox was trapped by the confinements of her society, the character is Vika is trapped in the more literal sense, as her body begins to shut down. “They both chose life,” Haas agrees. “They both chose to take as much control as they can with their life and said, ‘I want to live like that.’” For Vika, Haas, a self-proclaimed “nerd” when it comes to research, spoke to doctors and patients familiar with degenerative motor diseases, as well as read voraciously on the subject. “For this character, it was really crucial,” she says. “There are time jumps, so you need to understand, both as an actress and for the audience, what is going on.” Over the course of the film, Vika’s physical decline is subtle, while her emotions lay bare on her face. “When I watch dramas, the most powerful moments are when the eyes are talking,” she says. “It was physically hard to stay in the same position, but as for the acting, in a weird way it really suited Vika for me. She has become this woman who has nothing to hide and is becoming her true self as her condition gets worse. Her eyes tell nothing but the truth.”

Haas also has a habit of using music to connect with her characters. For each new project, she makes a playlist dedicated to the person she is portraying. Scrolling through her phone to pull up her Vika playlist — “I’m not going to tell you everything on it,” she teases — she begins to rattle off song names that made the cut: “Bridge Over Troubled Water,” “These Days” by Nico. It’s very different from her Esty playlist, which features songs by The Beatles and Nina Simone. Haas still listens to both regularly. “I’m not saying this because it's an interview, but these are two characters that really mean so much to me,” she says. “When I finished the projects, I had a hard time letting go, so I listened to their songs. … They are also just really good playlists.”

NEXT UP
Entertainment
Lindsay Lohan Teases Her Return To Film, 'Falling For Christmas'
Entertainment
Sophia Anne Caruso Makes Her Own Rules
Entertainment
A New Trailer Explores The Dark Side Of 'Barney'
Entertainment
Paul Mescal & Emily Watson On The Quiet Depth Of 'God's Creatures'