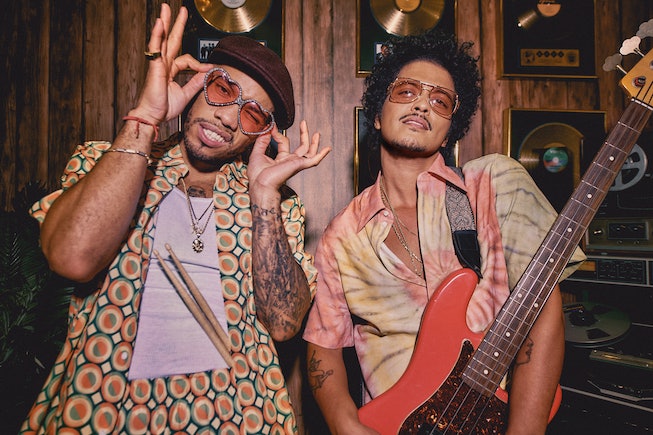 Silk Sonic, the duo made up of Bruno Mars and Anderson .Paak, are continuing their months-long tease of new music.

After making a colossal debut in March with their mega-hit “Leave The Door Open,” word of their next single — and even a mention of an album — didn’t arrive until months later, in July, with the release of the second single, “Skate.” They soon followed that up, finally, with the album announcement — An Evening with Silk Sonic, expected to arrive in November. And the tease is still going: The duo’s third and last pre-album single, “Smokin’ Out The Window,” arrives this Friday.

The superstar duo have been playing coy about the whole thing — largely staying offline and avoiding press — throughout the entire rollout, but effectively riled up their fans on Monday night after Mars posted a soundless video clip teasing the new track. The video shows Mars and .Paak rocking out in a retro-looking car, a blunt in one hand and a slice of pizza in the other. If the song is anything like their last singles — and all signs point to a probable yes — it’ll likely be another charmingly campy but abundantly soulful jam, drawing on the extravagant, rich sounds of the ‘70s.

An Evening With Silk Sonic is a highly anticipated project for both artists but especially for Mars, who released his last studio album, 24K Magic, in 2016. .Paak released his last album, Ventura, in 2019. But the universe of Silk Sonic and its album has been in the works for years now, stretching all the way back to 2016 when the two musicians spontaneously hit the studio together out of mutual appreciation and admiration for each other, per a interview with Rolling Stone. “We had so much fun in that session,” Mars told RS. “It turned into, ‘What are you doing tomorrow?’” Eventually, 2020’s lockdown helped them turn Silk Sonic from a ‘wouldn’t it be cool if that happened’ pipe dream into a reality.

Read on for everything we know about Silk Sonic’s An Evening With Silk Sonic so far — including its release date, track list, and singles.

Silk Sonic’s debut album will be out November 12, 2021 via Aftermath Entertainment/Atlantic Records.

The album’s full track list hasn’t been released, but the project is confirmed to include their previous singles “Leave The Door Open,” “Skate,” and “Silk Sonic Intro.”

New Single “Smokin Out The Window” is out on Friday

The album’s third and last single “Smokin Out The Window” will arrive on Friday. Watch a teaser for the song’s music video, below.