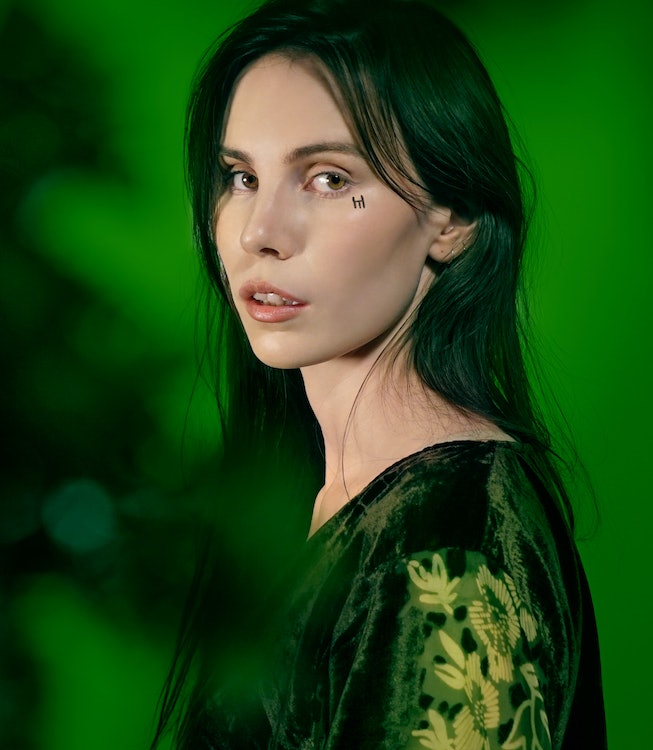 Swedish songwriter Skott's special brand of electronic pop sounds like it lives in the neon scenes of a lush and cinematic movie. Her most recent song, "Kodak & Codeine," with its streaky synth production and heartbreak lyrics, sounds ripe for downtown Los Angeles intrigue — pre-pandemic, of course. Her earlier singles, like 2016's "Wolf," even caught the eyes of Katy Perry and Lorde.

Skott is now gearing up to release her debut album, unveiling on Friday its first single, "Talk About Me," the video for which NYLON premieres below. A cheeky number about the narcissistic highs of fame, "Talk About Me" is also genuinely a bop, with Skott declaring: "All your exes and your teachers/ the crazies and the preachers/ Everybody's gonna wanna talk about me." Combined with its Paras IV-animated video — in which Skott glides through cities on a huge beetle, and Beyoncé and Jay-Z ride majestic goldfish — the song oddly lands like a bloated version of present day, where celebrities aren't riding on jeweled insects but instead preaching to the people from their cavernous mansions.

“It's a quirky song, about a little girl who loses her mind to narcissism while chasing her big dreams," Skott writes of the song in an email. "For the video we snuck pop culture references into this outer space Hollywood-type alternate universe — it’s so far from what I’d normally do. The lyrics tell a story about a little girl who dreams about fame, and it distorts into madness, like she's losing her mind. But we learn that in reality, she just feels invisible. I directed it together with my friend Paras IV who animated the whole thing, we had fun with it. I've always wanted to ride through Florida on the back of a giant beetle."

Watch the video below, and read on to learn a bit more about Skott.

What are you up to right now? Describe your surroundings.

Right now, I'm totally experimenting in the kitchen. I found an old bottle of booze in our pantry, so I threw that in a pasta sauce with a few other things I found. There's hanging lamps next to me with a vine growing down onto one of them, a large tropical looking tree, a potted fern, one fake succulent (why that one? Because those are the easiest to not kill?) and some paper windows from a trip to Japan behind that. If we're stuck indoors, I want to bring the outside world in with me!

"Talk About Me" gets kind of dark about the dangers of fame. What's your stance on celebrity culture?

I never had an Instagram account until I started releasing music, then suddenly the label said I needed to make one. But over time I learned to get creative with it, and for a while I got pretty into art directing each post I made. My relationship with social media is complicated, but there are good sides to it too, of course. In general I like to keep my private life separate from my work. But I realize that in today's world, the two cross paths at times, and I'm always learning new ways to balance this.

Some people seem able to just soak up the spotlight, or seem to have no trouble sharing details of their daily life, but I'm more of an introvert type. So for myself, I try to find an angle of creating content where I can have fun in the process, and I find that helps with the balance.

You're based in Sweden at the moment; what is the atmosphere there right now?

Sweden seems to be a bit of an exception when it comes to its response to the pandemic. I did a nightmare show in Mexico where my band and crew couldn't fly in (and learned this the day before!), then was denied my own return flight and forced to take a flight via Madrid, which people were already calling a "black zone" at that time. So we went from everyone wearing masks, closed shops and restaurants, and quarantining for 14 days — to going for a grocery run in Stockholm and seeing crowded streets and people sitting at restaurants, with no visible difference from before... It felt almost like a parallel world in comparison.

Your debut album is coming soon. How does it feel to be releasing music during this time?

Things do feel a bit up in the air, as I suppose with everything these days. I just hope people enjoy it. I've worked hard to put this collection of songs together, and I feel like they cover the spectrum of my different sounds, if you can call it that. So there's something there for everyone.

Can you share some of the music/books/art that you've been gravitating toward right now?

I'm gravitating more towards games at the moment, to be honest, and that includes a lot of indie games on Steam, like Faster Than Light or Don't Starve Together. Music wise, I listen to a lot of instrumental stuff at home, since I often get sucked into lyrics and can start analyzing them without meaning to. There's a lot of Animal Crossing and Zelda soundtracks. Sometimes I go for vaporwave or synthwave, occasionally jazz when I want to pretend I'm somewhere classy.