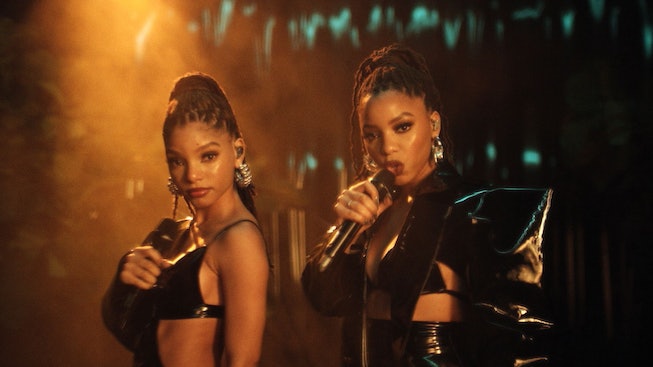 Pharrell’s Something In The Water music festival has undergone several changes since we last saw it in its inaugural form in 2019. The three-day festival — which returns for its second year this summer — has relocated to Washington D.C., a short hop away from its original location at Virginia Beach. It’s also been substantially expanded, with two new stages (three in total) and a significantly bolstered lineup.

The main thing that’s remained the same is the festival’s quality grab of talent, which this year includes Chloe x Halle, Calvin Harris, Ashanti & Ja Rule, Dave Matthews Band, Davido, Lil Uzi Vert, Dominic Fike, Lil Baby, Roddy Ricch, Tyler The Creator, Usher — and not to mention Pharrell himself, with special guests and “some people we can’t announce” just yet, per the festival’s lineup poster. It’s one of the best and most unique festival billings we’ve seen all year, a cohesive mix of new and old, and one we’d happily trek to Independence Avenue to witness.

Pharrell launched Something In The Water in 2019 in Virginia as a festival and cultural event dedicated to the DMV area. He’s raised the mission of the festival even higher this year aligning it to coincide with Juneteenth weekend in the nation’s capitol.

“Something In The Water is a Black solution (LOVE) for a systemic issue, and this year we are taking our celebration to a higher platform — the nation’s Capital during Juneteenth Weekend. We want to show the world that there is SOMETHING IN THE WATER across the whole DMV and I want to continue to bring awareness to the greatness within these communities and invite large corporations to show up for the people,” Pharrell writes in a press release.

For everything we know about attending Something In The Water 2022, including the full lineup and how to buy tickets — read on.

Something In The Water 2022 lineup

Go-go musicians Backyard Band, Rare Essence, and Sound of the City will also perform. There will also be a return of Pop-Up Church Service from a stage in West Potomac Park on Sunday, the lineup for which will also be unveiled soon.

See the full lineup of acts and activities at the festival’s website.

Something In The Water 2022 Dates & Location

Something In The Water takes place June 17-19, 2022 — Juneteenth weekend — at Independence Ave in Washington, DC.

How to buy tickets to Something In The Water 2022

Three-day passes go on sale to the general public starting Saturday, April 30 at 10 a.m. local time via the festival’s website.

Prior to that, there will be a few opportunities to snag presale tickets; fans who have attended and purchased passes to the festival in previous years will be able to access an exclusive presale for the 2022 event starting Wednesday, April 27 at 10 a.m. ET through Thursday, April 28 at 10 p.m. ET.

Virginia residents will also have access to a “Virginia Locals Only” presale taking place Friday, April 29 starting at 10 a.m. ET through 5 p.m. ET. Residents will be able to purchase passes in-person at the Veterans United Home Loans Amphitheater at Virginia Beach box office. Fees will be waived for the in-person purchase.