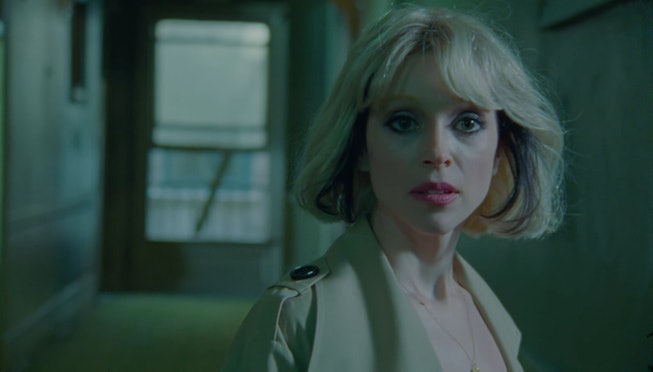 St. Vincent is in a blonde-and-black bobbed wig, running through the halls of an empty building. A phone is ringing somewhere in the distance. She's stressed and barefoot, holding her heels in one hand with her trench coat open, revealing rounds of silver sequins sewn on the inside. She finds the ringing device and answers it, only to hear a man greet her by name, Annie, on the other end. She looks up knowingly, and the words "Daddy's Home" appear in big, groovy lettering.

Artist and auteur St. Vincent shared this new teaser late Monday for her upcoming studio album, Daddy's Home. It arrives days after she first semi-announced the project through cryptic street posters plastered around the world. "Warm Wurlitzers and wit, glistening guitars and grit, with sleaze and style for days" is how the posters described the new album's sound. Now, we've received a visual representation of that new world, and it indeed seems to be channeling '70s sleaze with a dash of sequined glam underneath.

At the end of the clip, St. Vincent also shared a new hotline, 1 (833)-77-DADDY, you can call to get a taste of her upcoming lead single, "Pay Your Way In Pain," which plays in the last few seconds of the teaser clip. It sounds funky, with groovy guitars and maybe an electric sitar thrown in the mix. Over the hotline, the song sounds too distorted by static to decipher anything else, but one does get to hear the man's voice from the phone again, as he announces the return of Annie Clark "in a new role."

Keeping in line with the mysteriousness of the rollout, there's no release date for when the new track is dropping, but word on the street is that it'll be arriving on Friday. Hear the preview for yourself below.