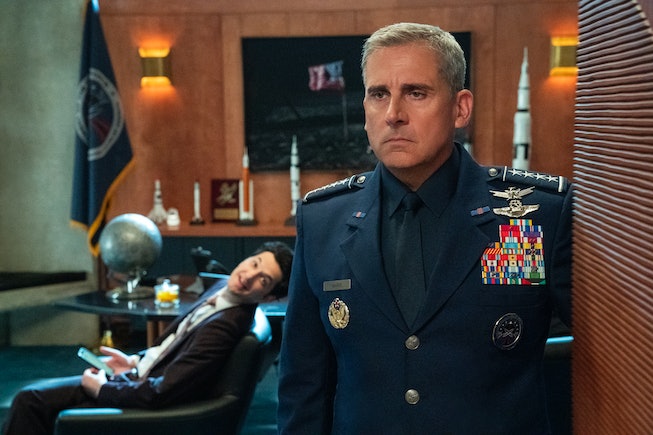 Not a single day has gone by this quarantine where I haven't heard the familiar theme song of The Office blasting from my roommate's bedroom. It's clear that she's found a certain comfort with the recognizable beats of this Steve Carell-starring workplace sitcom, but after rewatching any of the show's 201 episodes for the umpteenth time, I can't help but wonder...can you come up with something else? Well, hopefully she'll be able to soon, especially now that Space Force, a new workplace sitcom created by the Golden Globe-winning Carell alongside his Office partner-in-crime Greg Daniels, has dropped its first trailer. Once again focusing on Carell as a leader trying to maintain a cool head amidst all the madness bubbling around him, the new comedy series has the potential to be everything fans of The Office have been waiting for.

Following the creation of a fictitious government-funded "Space Force," Space Force stars Carell as four-star general pilot Mark R. Naird, whose dreams of one day leading the Air Force are hopelessly abandoned when he's instead put in charge of this nascent branch of the United States' Armed Forces. Placed on a highly unrealistic president-enforced timeline to get people back on the moon as soon as possible (in hopes of colonizing it), Mark finds himself struggling to live up to his demands as he is forced to balance the incompetence of the upper levels of government while also juggling the ever-increasing demands of his family, who aren't dealing with their spontaneous uprooting in the best manner. I've had the privilege of checking out a few episodes, and based on early impressions, this successor to The Office feels like a comfortable mix of Armando Iannucci's multi-Emmy winning classic Veep and his 2020 followup Avenue 5.

Watch the hilarious trailer below. Space Force debuts on Netflix on May 29th.

This article was originally published on May 5, 2020