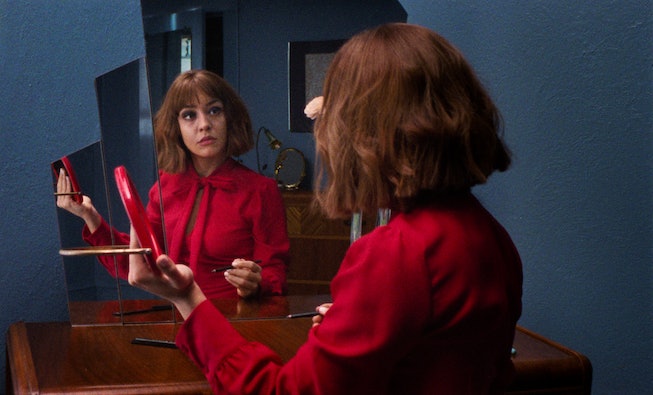 Female filmmakers were brought to the center at this year’s Sundance Film Festival. Films like the war tale Mayday, epic fantasy The Blazing World, and dark horror story Censor have each given us unique stylistic visions grounded in complex female characters. But among them, Erin Vassilopoulos' debut feature Superior is the hardest to pin down. It’s a genre mash-up of comedy, thriller and neo-noir, all grounded in effective family drama.

The film tells the story of two identical twin sisters, Marian and Vivian, reuniting for the first time in 6 years. Their lives couldn’t be more opposite — Vivian is a devoted housewife in a tense marriage, and Marian is a rocker on the run from her abusive boyfriend. Once they come together, they begin to experiment with identity, stepping into each other’s shoes as a form of reconciliation. But all the while, the shadow of Marian’s past threatens to put them both in danger. It’s a slow burn of a film that explores the blurred lines of identity.

I had the pleasure of speaking to Vassilopoulos and co-writer Alessandra Mesa, who stars in the film with her real-life twin sister Anamari:

I see that Superior was originally a short film. Is it similar to the feature?

Erin: The feature was definitely inspired by the short and the goal was to extend the world we created and pick up the story between the sisters six years later. So there’s definitely a lot of crossover in terms of the themes we were exploring in the short and also the visual style. They’re definitely companion pieces and in a way, the short is the prologue to the feature. But you definitely don’t need to have seen the short to watch the feature.

How did you come up with the characters of Marian and Vivian?

Alessandra: So, the characters originated in the short. In the short they’re much younger. So then it was just us going into a hypothetical of: “Where would these characters be six years later? There were certain things we were excited about early on. One was the idea of woman sisters coming home. We imagined that Marian’s character left home after the short film and hadn’t been back since — and just how strange and difficult it can be to go back to where you’re from. Especially for Marian not having seen her sister in six years and also carrying this trauma with her.

Why haven’t they seen each other in six years?

Erin: The themes we’re exploring have a lot to do with the tension between the closeness of twin sisters, but also like Ale was saying, Marian needing to go off on her own and find her own self. And then the feature, as it progresses, is the inverse of that. They’ve been a part. They’re very different. They’re on different trajectories and the feature explores them reconnecting and becoming close again.

Alessandra: Making that decision for us as writers is exciting and made for the most fertile ground as far as exploring this dynamic. Even more in the feature than in the short, they’re both dealing with their own identities and they help each other begin to rediscover that.

Alessandra, what was it like working with your sister?

Alessandra: It was great. We really are artistic partners and we’ve made a lot of things together. It was fun to work together and it felt like a natural progression from what we’ve been working on as a team. I mean, we are both individual artists in our own right and do our own thing often, but it felt really nice to have this be something we worked on together.

So, I’m very curious about the men in the film, because I found them both very interesting and weird.

Alessandra: The movie is very stylized in the way that these characters are represented is very larger than life. We both felt that most movies, especially older movies, spend a long time exploring the male protagonists that lead them. There’s a lot of time not spent on the female side piece that they have in the film and this felt like the reversal of that. We did feel like spending time on the female protagonists was what we cared about.

Erin: I think there is a little bit of a cheekiness to the whole thing.

Erin: I want it to feel real, but at the same time we’re having a lot of fun with the script. I think the actors were hopefully having fun with their characters. I want it to be a fun ride.

Yeah, it definitely is! I was asking about the men, because it felt like you were doing some commentary on how constricting they can be. In two different ways. On one side there’s the very violent kind of constriction, and on the other there’s a more heteronormative suffocation going on there.

Erin: Definitely. But I think that, like Ale said, we were always working at that from the angle of the women. But definitely the men are playing a big role in how these women are feeling trapped and constricted in different ways.

Yeah, I definitely can see that in the film. So, as I was watching I was trying to figure out what tone you were going for, and it felt like Twin Peaks. I don’t know if that was deliberate or not.

Erin: There were a ton of influences, but I think Twin Peaks is definitely one. But we were definitely trying to work against that too. I really like movies that explore a world that is very different from our own. So I really like films that are sort of heightened and stylized, taking you into this difference space for a couple hours. We wanted certain things to be grounded, but at the same time one of the exciting things was to create something larger than life, and that gave us room to play around with different tones and genres. And hopefully that comes across in the movie.

I wanted to switch gears a bit and talk to you, Erin, about the look of the film in terms of the production design and the costumes because they’re very distinct. It’s some of the most interesting visual presentations I’ve seen at the festival this year.

Erin: Thank you. I’m definitely very visually driven in terms of process. Early on in developing ideas and writing I started collecting a lot of images. Photography, location images, stills from other films. I had worked with our production designer Maite Perez-Nievas on a short film, so we had already developed a minimalist heightened style together. I wanted color to be a big part of the movie, so we talked a lot about palette. The movie is set in the 80s and I definitely wanted it to have that flavor and feel of that time.

But I also feel like 80s can become cliche really quickly and overdone. So we definitely talked a lot about wanting to create a timeless feel. That went into the costumes a lot as well. The locations also are a big part of how the visual world came together. We spent a lot of time looking for the right locations and managed to find some amazing locations that already had a tone of built in production value and had that 80s feel already. That’s always a really exciting part of the process to me.

That’s so interesting because as I was watching the film, it was actually pretty hard to place it in time. There were times when I thought it was the 70s, there were times when it felt like the 80s and there were certain times — especially with the violent boyfriend character —where I thought: “He seems like he comes out of the 50s.”

Erin: I actually like that. It’s very subtle. There is a calendar early on in the movie that shows up a couple times that says it’s 1987, but other times there’s no specific references to the 80s other than a general feel. I’m glad you thought it felt timeless.