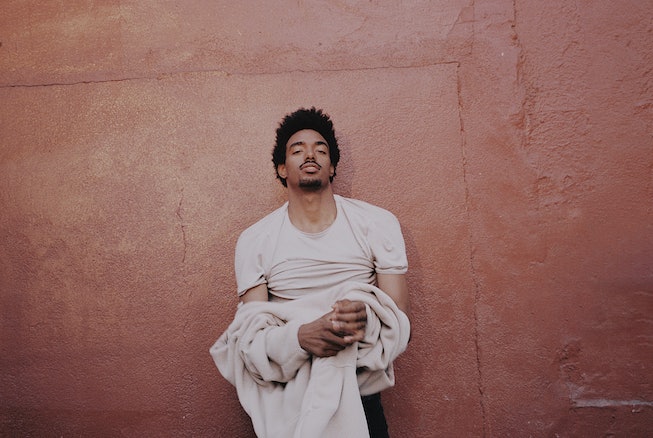 In the 2020 songwriting economy, few markers are quite as alluring as going viral on TikTok. Even as the platform faces a potential ban in the US, the app's ability to turn unknown (or lesser known) songs into Billboard charting hits has made the viral track to pop stardom pipeline as appealing than ever.

One songwriter and TikTok creator, Tai Verdes has recently hit on the formula for success with his song "Stuck In The Middle." A catchy bass riff primes our ears before Verdes' soothing falsetto tickles them with relatable lyrics about dating in the modern era. Verdes is no Hype House industry plant — though he has appeared on reality TV, MTV's dating show Are You The One? for its sixth season. It was being cut several times from music competition shows like American Idol that spurred the 24-year-old to hone in on his songwriting, vocal abilities and online marketing, writing "Stuck In The Middle" over a YouTube beat late night while (he was working at the Verizon store at the time).

Now, with "Stuck In The Middle" having hit #1 on the Spotify US Viral Charts, Verdes is working on a debut EP. He chatted with NYLON about the release of the official "Stuck In The Middle" video, what it takes to make a viral hit and why if you have an inkling to try something new, you should "go fucking do it."

When did you start making your own music?

When I started making music, I started making bad music, which I think is really important. You gotta realize you’re bad in order to get better. It took 3 years of taking song writing seriously before I felt like I could consistently make something good.

When did you first realize "Stuck In The Middle" was really gaining traction?

I knew the song was going to be big when I sent it or showed it to my friends and instead of people giving you the typical “Aww, that’s cute, he’s trying” vibe, they gave me the, “Oh shit, I’d put this on my playlist” vibe. Which is a beautiful thing to see.

What's the recipe for a successful (viral) song on TikTok?

I think you have to be really honest and relatable in your music in order to make a hit. Everyone says that... but if you can really articulate that feeling that you think inside your head.

Tell us about the video for "Stuck In The Middle."

The video for “Stuck in the Middle” is just showing what dating is like for anyone my age. Meeting people and trying to figure out if they are the worth spending your time on and vice versa.

What else are you working on at the moment? What's next?

Just wanted to say if you’ve ever heard a song and thought “I could do that,” go fucking do it. You won’t regret trying to make music, ever.

NEXT UP
Entertainment
Samia On 'Honey' & Saying The Ugly Part Out Loud
Entertainment
Ebony Riley's "Deuce Deuce" & 9 Other New Songs Out This Week
Entertainment
Beyoncé Is Now The Most Awarded Artist In Grammy History
Entertainment
Harry Styles' "As It Was" Grammy Performance Featured A Silver Tinsel Onesie
Style + Culture, delivered straight to your inbox.