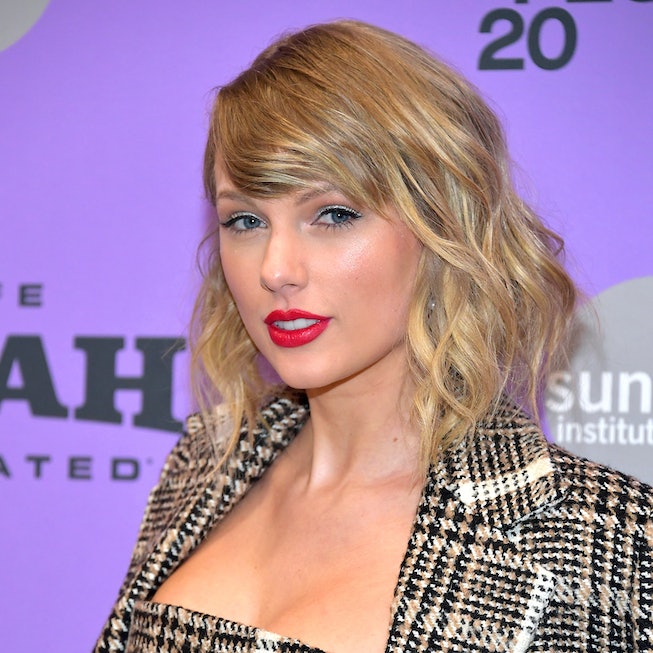 Surprise! Taylor Swift is the latest artist to drop a quarantine album. The singer-songwriter is releasing folklore tonight, and I'm convinced she learned the term "cottagecore" and thought to herself, "Hmm, what if I made this the theme of an album?" folklore's album cover features a black-and-white Swift walking into some serene woods, her blonde tresses swept away in messy braided buns and a denim jacket revealing white poplin dress — all the marking of a a cottagecore uniform. If that's not convincing enough, her new merch also includes a simple knit cardigan. That's folklore, baby!

It turns out Swift was pretty bummed that summer was cancelled due to the ongoing COVID-19 pandemic, and decided to soothe herself in the classic Swift manner by writing a new record. "Most of the things I had planned this summer didn’t end up happening, but there is something I hadn’t planned on that DID happen," she wrote on Instagram. "And that thing is my 8th studio album, folklore."

folklore is bringing out the big guns, recruiting indie and folk's biggest names in its creation. The National's Aaron Dessner wrote or produced 11 out of folklore's 16 tracks, Bon Iver co-wrote and is featured on the track "exile," and as any good pop-adjacent release does, includes production by Jack Antonoff.

Swift's previous album Lover had a drawn-out and meticulous rollout, but it seems like quarantine has encouraged her to live in what we in the biz call the "now," and just go ahead and drop it. "Before this year I probably would’ve overthought when to release this music at the ‘perfect’ time, but the times we’re living in keep reminding me that nothing is guaranteed," she confessed. "My gut is telling me that if you make something you love, you should just put it out into the world. That’s the side of uncertainty I can get on board with."