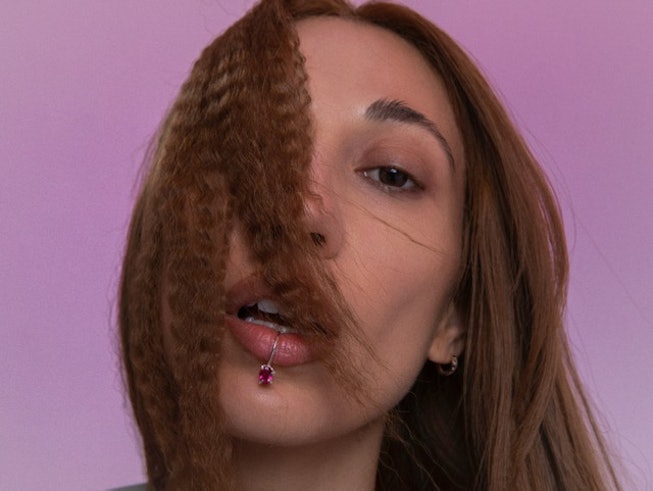 In July 2021, Tei Shi’s sophomore album, La Linda, disappeared from streaming services. Based in New York at the time, the Colombian-Canadian singer-songwriter revealed to her fans on Instagram that she was forced to take it down after failing to secure payment from her former label for her work on the album. “Since I turned in my masters in the summer of 2019, I’ve been trying to get the backend of my advance payment,” she explained. “This is just the very final touch on a painstaking, several year process of trying to get this album made and out in the world in the first place.”

At the time, her announcement ignited a conversation online around artists’ rights and their lack of control and ownership over their own music in today’s industry ecosystem. Now, nearly a year later, Tei Shi premieres on NYLON a new song written in response to everything that happened — “Grip,” out now and her first official release as an independent artist.

Over a gritty, pulsing spare pop beat, Shi sings about feeling trapped and out of control, in the palm of the hand of some greater uncaring power. “You think you know but you don’t/ But you don’t, look you’ve got your grip around me, and you’re not letting go/ Think you’ve got me in the palm of your hand/ What don’t you understand? I need that money.” It’s agonizing to hear her experience in her own words knowing the full context of what happened, but a streak of fiery defiance simmering within the track ultimately makes this song feel like a win for Shi, rather than one commiserating a loss.

“I wrote ‘Grip’ during the summer of 2021, when I was in New York on a writing and recording trip,” writes Shi of the song via email. “I’d finished my deal with my last label after a really shitty experience, and I was trying to get paid my advance, which I'd already been owed and chasing down for almost two years. They were flat out ignoring me, so I ended up resorting to taking down the album from streaming platforms so they'd notice and finally pay me. I wrote ‘Grip’ a few days after I did this, and still hadn't heard back. At the same time, I was dealing with my new label, which was refusing to pay for anything. They wanted me to make them an album but wouldn't give me a budget to work with and wouldn’t commit to releasing anything. I had planned and paid for the trip to New York on my own so I could make new music, and was fighting with them constantly trying to get support. All this was going down at the same time as I was trying to stay creative and focused, and I just felt so angry and helpless. I went into the studio that day with my friend and collaborator Mikey Freedom Hart and the song just spilled out.”

Now fully in control of herself, career, and music, Tei Shi is overlooking a bright new horizon, though one not without its own challenges. Hear “Grip” below, and read on for her thoughts about whether artists should be signing with labels, what needs to be changed with the label-signing process, and what she’s learned now that she’s independent.

I'm sitting in my parents' apartment in Vancouver, eating a bunch of cheap yet delicious sushi I picked up from the spot down the street. From the window I can see the ocean, mountains and endless bright green tree tops. It's the most beautiful day outside, even though it said it was going to rain all day. I'm listening to Beverly Glenn-Copeland's Keyboard Fantasies album. I'm trying to get myself together for my show tonight — my first in 2.5 years. I had just started a tour in March 2020 when the pandemic hit, so this is my first time back on stage since then. I keep waiting to feel nervous but I just don't... I feel excited.

In a previous interview, you said that you don't believe any artists should be signing with labels right now. Do you still feel that way?

It's a tricky subject. I don't believe flat out that no artists should be signing with labels. I completely understand the desire and the need to sign with a label, especially when you're starting out. That said, we all have the tools these days to release music on our own, to own it, and to build our business without needing a label. It's a question of what type of artist you are, what you want, and what your circumstances are. I know when I first signed with a label, I thought I needed to, in order to get that stamp of approval and to have a team, but more importantly, in order to be able to fund my first album. There was just no way I would have been able to make a full album without that financial help. But I also think times have changed since then, and nowadays, I would have just started releasing singles and looked for other, smaller forms of funding. Back then though, you really needed to have a full album to be taken seriously. I think if you're starting out and you need the money in order to focus on your music and get it made, signing with a label can make sense. Make sure you really understand what you're getting into though. My experiences with labels have been that even the financial part, getting a budget and getting an advance, is not guaranteed. Even when you have a contract that you negotiated and signed. It's very hard to hold labels accountable for anything. So, if you can afford to make music and live off your own income, I would say don't sign to a label. If what you value most is any type of freedom, don't do it.

How can labels change to do better by their artists?

First of all, they can stop signing artists that they're not willing to really invest in and work hard on. They can provide accurate, and regular accounting to their artists. They can drop their artists if they don't believe in them anymore or don't have the funds to support their work and approve budgets. They can let them go if they are asking to, instead of hoarding them and holding them against their will. They should begin by understanding that the artists they sign are human beings, not just product and content machines. They can respect the fact that mental health matters, and that their actions or lack of action can have real repercussions on the very real humans that their artists are. But I don't really think there's actually that much that labels will do to change. The industry needs to change...the culture needs to change. There should be a regulatory entity that protects artists, that ensures labels are held accountable, that there's transparency for artists when it comes to the numbers, and that if a label isn't holding up their end of the deal, artists have options to get out of it before having to go to court and sue the label. That's really the only option artists are left with when their label won't just let them go - and few artists can actually afford to file a lawsuit. Labels know this and they take full advantage of it..

"Grip" is your first fully independent release. What have you learned about navigating the industry as an independent artist?

All of the above! I've learned so much, but ultimately the most valuable thing I've learned is that I am my business. I don't need someone else to come in and tell me what to do, what kind of music to make, how to make or release it, how to build a business. I need to decide that for myself and actually trust and believe in my ideas and desires. I have the ability to hire people and tell them what I want and build a team based off of my instincts, rather than off of what the industry dictates. Finding my way back to myself as an artist and as a person who's in control of their business has been really, really hard, but it's been the biggest lesson I could have learned.

What has been bringing you happiness these days?

The outdoors...I just did a road trip from LA to Vancouver, camping all along the coast. Spending time in nature has brought me lots of peace and perspective. My family, friends, and partner. Meditating. Creating without having to run it by anyone. Choosing who I bring into my work. Working with more women. Dancing and traveling again. Releasing new music!

NEXT UP
Entertainment
19 Niche Music Festivals For Every Type Of Person
Entertainment
Meet Amy Allen, The Grammy-Nominated Songwriter Behind Pop's Most Honest Hits
Entertainment
Beyoncé Announces 41-Date 'Renaissance' Tour
Entertainment
FLO Is Headlining Their First US Tour This Spring
Style + Culture, delivered straight to your inbox.