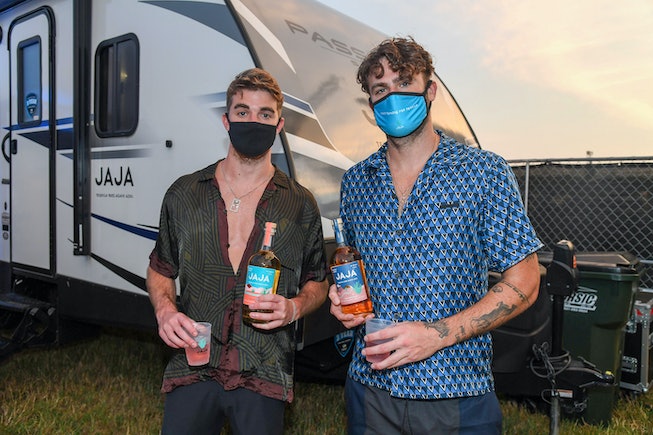 The Chainsmokers are getting called out on the Internet after footage taken at a Hamptons drive-in concert of theirs, in which attendees did not look to be social distancing, began circulating on Twitter on Monday. Videos taken from Adam Alpert's Instagram story showed the band performing on stage before panning to a dense crowd of people that looked to be congregating very close together and not exactly following the CDC mandate of staying six feet apart from people not from your household in both indoor and outdoor spaces. Naturally, the Internet went in.

"Isn't the whole point of a Drive-In concert to stay in the car???????" tweeted one user. Another photo of a flyer seemingly from the event seemed to show that the Hampton concert was the first of several more to come to other cities: Miami, LA, Atlanta, Nashville, and Chicago.

"Florida? Where we have the epicenter for covid? Yeah that’s a bad idea all around, they need to not come here because it’s bad enough already," another user tweeted.

Others simply used the opportunity to dunk on the pop-EDM band, who've acquired a somewhat unpopular reputation in the same vein of Nickelback in recent years. "Imagine giving yourself COVID to watch the Chainsmokers hit 'Play' on their 2018 Macbook Pro," wrote one user.

The drive-in concert, which took place on July 25 and also featured a DJ set from the CEO of Goldman Sachs, hosted around 600 vehicles, and provided different tiers of guests "personal area[s]" that ranged from 20 feet x 20 feet to 20 feet x 15 feet, according to the event website. The event FAQ page also states that "guests may not leave there [sic] 20 x 20 for VIP or 20 x 15 area for GA unless using a restroom."

On Monday, 9:31 p.m., NYLON was notified by Jack Sterne of New York Governor Andrew Cuomo's office that the state has opened an investigation into the event.

The live music industry have taken a massive blow since the coronavirus pandemic hit in early March, with countless tours, and festivals getting cancelled through 2020. It's clear some event organizers are beginning to experiment with new forms of live music, with drive-in concerts being one of the more prominent alternatives. Keith Urban became one of the first mainstream artists to perform a drive-in concert for healthcare workers back in May in Watertown, Tennessee.

See footage from The Chainsmokers Hamptons show below.

Editor’s Note: This article was updated at 9:36 p.m. ET to include information about the state's investigation.

This article was originally published on July 27, 2020