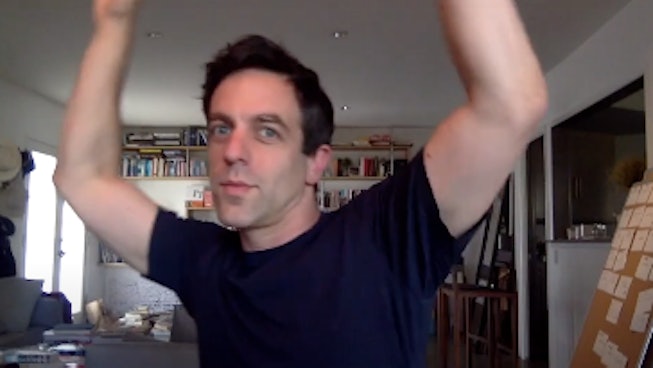 Trying to decide what to do for a quarantine wedding can leave one in a difficult bind: should you try to reschedule despite all your nonrefundable down payments (and lack of knowledge about when this will be all over) or should you go through with it as scheduled, albeit in some less direct (and surely less exciting) way? For those who might opt for the latter, there are generous souls like John Krasinski, who used his quarantine YouTube series Some Great News to surprise one lucky couple with a virtual Zoom wedding, based off the iconic wedding for The Office's Jim and Pam.

During his "Love In the Time of Quarantine" segment, Krasinski highlighted several socially-distanced weddings before hopping over to his "favorite love story of the week." Said story came courtesy of The Office superfans John Lush and Susan Hedrick, a Maryland couple whose gas station proposal Krasinski joked "was oddly familiar." According to the A Quiet Place actor, the couple sent in their proposal video with a request that he would attend their wedding, but after joining the engaged pair over Zoom, Krasinski surprised them by revealing that he would not only attend the ceremony, but would actually perform the services himself, so long as it could happen right then and there. (He even got ordained online for the special occasion.) The surprises kept coming as he opened the chat to some special guests — first, to both party's parents, then to their best friends, and then to Jenna Fischer (the Pam to Krasinski's Jim), who would serve as the bride's maid of honor. And because Susan's father would not get the chance to actually walk his daughter down the aisle, Krasinski even treated the couple to a special performance by Zac Brown, who performed an original song from his home.

But the real surprise was saved for last. After the official ceremony, the Emmy-nominated actor opted to keep the party going by opening the Zoom meeting to the rest of his The Office costars — including Steve Carell, Mindy Kaling, Ed Helms, Rainn Wilson, Ellie Kemper, Angela Kinsey, and BJ Novak — for a special reenactment of the famous Office scene that followed Jim and Pam's wedding. Yes, I'm referring to the impromptu dance party soundtracked by Chris Brown's "Forever" (which, itself, is a reenactment of this viral video).

Put a smile on your face with the latest episode of Some Great News below.