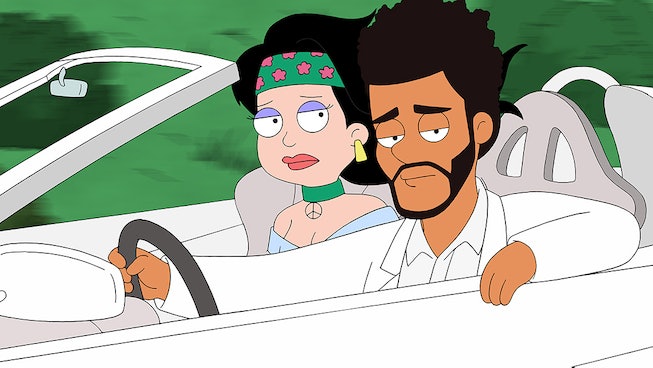 The Weeknd, a self-proclaimed longtime American Dad fan, made his (voice) acting debut on the hit animated show on Monday, playing a pretty substantial role and sharing a brand new song. Fittingly titled "A Starboy Is Born," the episode revolved around main character Stan abducting The Weeknd to teach Roger a lesson, and was even co-written by Abel himself. The highlight of the show, however, was The Weeknd's obligatory musical moment during which his character grew wings and sang a song called "I'm A Virgin" that, honestly...is a bop.

Though The Weeknd more or less played himself on the show, there were clearly marked differences between his American Dad character and who he is in real life — as in we're pretty positive he isn't a virgin.

It turns out Abel wanted it that way, explaining in a Variety interview that he "always wanted to play a character that was the opposite of the public’s perception of me — and of course make fun of myself."

"I’m a longtime fan of [American Dad]," he added. "I’ve been watching since high school but I really appreciated it about seven years ago. It’s been running for so long, and I feel like it has a real cult following. To really enjoy the show in its entirety you have to really know the characters."

Abel, a cartoon nerd — who knew? In the same interview, he revealed that he also had the opportunity to do some voice work for Adult Swim's Robot Chicken, and that his ultimate dream is to work on The Simpsons.

American Dad is The Weeknd's latest addition to what is turning out to be a very diverse resume. Previously, he cameoed in the Safdie Brothers' hit Uncut Gems, and starred in a few skits for Saturday Night Live. His cinematic music videos for his most recent album, After Hours, also serve as strong proof that if his whole music career ever goes left (however unlikely), well, acting would be a great back-up.