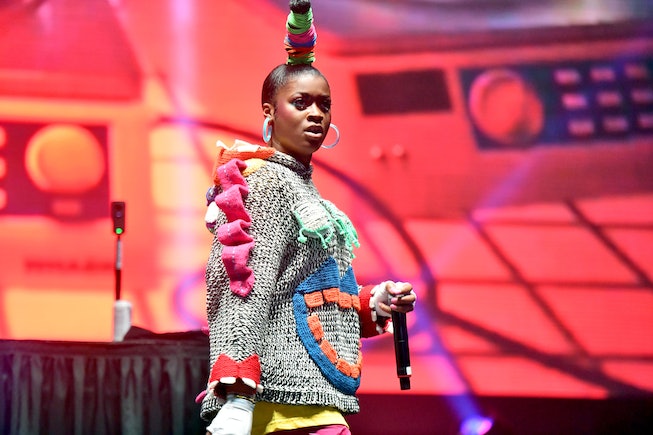 Tierra Whack is back! The Philadelphia native and Grammy-winning artist has finally announced her latest project, and it’s coming out sooner than you think. On Thursday, December 2nd, the enigmatic artist will release her new EP titled, Rap?

The highly-anticipated record marks Whack’s return to the music industry after a long hiatus. Her first-album, Whack World, debuted in 2018 and was adored by fans and critics alike. The 15 track — and fifteen minute long — project earned Whack a “Best New Music” nod from Pitchfork, and established her as one to watch in the alternative rap-space. Known for her ingenuity and creative visuals, Whack also earned a Grammy nomination for her “Mumbo Jumbo” music video the year prior.

Since then she’s been featured on works by Beyonce, Alicia Keys, Willow Smith, Melanie Martinez and Lil Boat but has remained relatively quiet about her own music. Though Rap? premieres tomorrow, Whack has kept most of the record's details under wraps. Aside from the cover art — which features someone holding a lighter, while wearing overalls and clown makeup — none else is known about her new music. She even declined to make a public EP announcement, and instead opted to post fans' reactions instead.

This afternoon Whack retweeted a brief note that read, “New Tierra Whack this week I’m hype as ever.” Prior to that she reposted links to articles from Pitchfork and The Fader announcing the EPs arrival. Luckily we won't have to wait long too long to hear her latest masterpiece.

Rap? will be available to listeners everywhere tomorrow. In the meantime, check out her latest Vans collection made in collaboration with California artists’ Judy Baca, Brenna Youngblood, and Frances Stark. The vibrant shoes are available to purchase on December 3rd, right in time for the holidays.