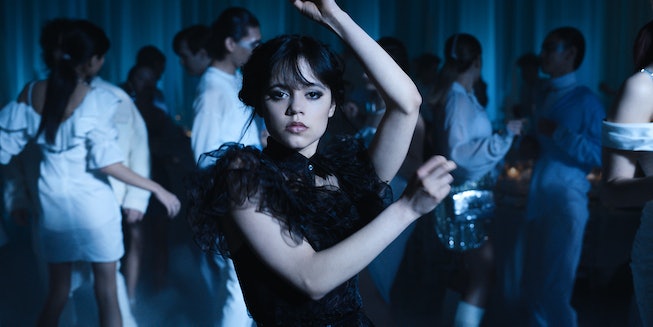 The most animated Jenna Ortega’s Wednesday Addams ever gets in Netflix’s Wednesday comes in episode four, when the titular character attends her boarding school Nevermore Academy’s annual Rave ‘N ball. Donned in a black, tiered organza gown with her signature braids pinned up around her head, she delivers an incredible dance scene to the groovy, psychobilly tune of The Cramps’ “Goo Goo Muck.”

But this is Wednesday we’re talking about, so her moves aren’t exactly what you’d consider “normal.” Instead — with her face set in a deadpan grimace the entire time — she flails her arms and bends her back nearly 90 degrees, executing shimmies and spins simultaneously recalling Fosse and goth teens flagellating under overpasses. It’s one of the series’ most unforgettable moments — and it’s absolutely delightful.

Naturally, that scene and Ortega’s dance — unexpected, exuberant, and delivered with such confidence — has taken the internet by storm. If you’ve been on TikTok, you’ll know that her dance moves have already been interpreted by droves of people around the world since the series’ highly anticipated premiere Thanksgiving weekend. On the platform, the hashtag #wednesdaydancing has over 11.6 million views, and is filled with videos of people strutting their stuff and delivering their best dead-faced stares (including teachers, apparently). Many of the videos are soundtracked to a sped-up version of Lady Gaga’s “Bloody Mary,” seemingly randomly, though more and more are using “Goo Goo Muck” as well.

The biggest winner of all of this is, obviously, The Cramps, who are now the latest bygone band to get the viral treatment. Since the show’s premiere, the iconic ‘80s rock group has experienced an over 464 percent increase in Google searches per the data-collecting site Jeffbet, while “Goo Goo Muck” has been streamed over 2 million times in the U.S. per Billboard — that’s an 8,650 percent increase in streams — and that number’s only growing.

Of course, when it comes to viral songs, nothing can really compare to Kate Bush’s “Running Up That Hill,” and “Goo Goo Muck” certainly can’t at this stage. Still, there’s a chance it could become the latest retro track to be revived by the online generation this year, following in the footsteps of Wheatus’ “Teenage Dirtbag” and more. As for the band itself, they haven’t issued a response. But Jim Shaw, the man who happens to own the publishing rights to the song, has called the resurgence “a really amazing, fun little bonanza.”

The Cramps released “Goo Goo Muck” in 1981 as part of the band’s second studio album Psychedelic Jungle. Their version of “Goo Goo Muck” was actually a cover of the 1965 original, performed by Ronnie Cook & The Gaylads, and their song was later featured in the 1986 Texas Chainsaw Massacre movie. The band formally disbanded in 2009 following the death of their lead singer, Lux Interior.

See more videos of the “Goo Goo Muck” trend on TikTok, below.