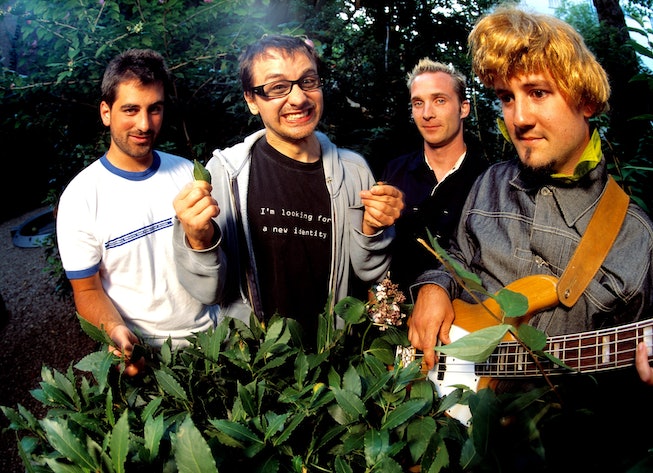 TikTok is ostensibly a video-sharing platform, but if there’s anything the past few years have shown us, it’s that it’s also a springboard to revive old songs for a new generation. After playing a major role in the second-comings of Fleetwood Mac’s “Dreams” and Kate Bush’s “Running Up That Hill,” TikTok has latched on to Wheatus’ Y2K misfit anthem “Teenage Dirtbag,” the latest retro hit to get the viral treatment.

Over the past few weeks, the punk band’s enduring classic about adolescent alienation has soundtracked hundreds of thousands of TikTok videos, thanks to the latest “Teenage Dirtbag” trend. Using a sped-up, nightcore version of the 2000 song, the trend entails people sharing photos of their most dirtbag-y selves — crowd surfing at concerts, smoking cigarettes, getting blacked out at parties — largely from their younger years.

The best TikToks highlight the hilarity and melodrama of the “Teenage Dirtbag” image, as people share their cringiest archival photos and interpretations of grungy, outcast fashion. However, as all TikTok trends do, it’s since morphed into its its own thing, as people are now using the sound to offer their own interpretations of the phrase. Some are subverting expectations by sharing “bookish” photos instead, and — for the Gen Z that may be too young to have actually lived through a “Teenage Dirtbag” phase — completely making up their own photos in 2022. If being a “Teenage Dirtbag” was an insult to be reclaimed back in 2000, in 2022 it’s what everyone wants to be.

Celebrities and popular musicians have hopped on the trend with their own throwback pics. Joe Jonas, Charli XCX, and Mark Ronson are just a few of the artists that have shared photos from their younger days, shocking fans with how different they looked back then (or hot, in the case of Ronson). But perhaps the most iconic video came from Alicia Silverstone, who used her sulky and sullen — but still utterly glam — headshots from her Clueless days. And on the more dystopic side of things, CGI influencer Lil Miquela participated in the trend, sharing her own “dirtbag photos” that are scarily real and accurate-looking.

As for the band behind the track, Wheatus hasn’t yet publicly commented on the trend, but it seems the song has been long-due for a revival. Back in 2020, to commemorate the 20th anniversary of the song, the band re-recorded — note-for-note and line-by-line — their debut album Wheatus, the project that housed their one and only hit. Per Rolling Stone, the reasoning for the re-recording was to create a new set of masters for the song, as Wheatus doesn’t own the originals. The band realized they were missing out on a lot of money as “Teenage Dirtbag” has proven to be an enduring rock relic, still covered by artists like One Direction and Ruston Kelly.

Now, with “Teenage Dirtbag” capturing a second wind on TikTok, it seems like a potential win and opportunity for the band, even if the trending TikTok sound isn’t technically Wheatus’ own. At the very least, the latest fervor might propel more people to discover the re-recorded version of “Teenage Dirtbag” and deliver a happy ending for one of the world’s most enduring loser anthems.