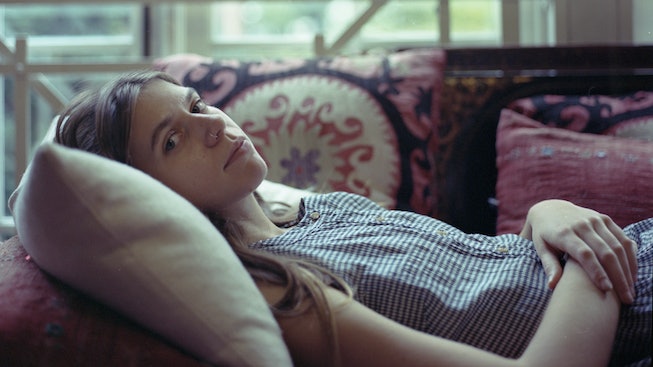 “That really resonated with me,” the 25-year-old and recent Los Angeles transplant remarked over the phone one recent morning. “That's kind of how I want everything that I've released to feel.”

If that’s the case, then I can’t think of anything more gorgeous than Tomberlin’s delicate and mystic folk to pass one's time. The young musician has just shared her latest project, Projections — a tight and quiet sachet of tunes that, when listening, feels akin to the quiet wonder of stumbling upon a glittering secret lake during a long hike. Hushed vocals, dewy guitar, and lush instrumentation saturate its five tracks, as Tomberlin sings about the small moments shared between her and a lover. “Did you wonder when we’d kiss?/ I think you did/ Held me for hours,” she whispers on its opening track.

Nearly two years after the release of her excellent debut record, At Weddings, Tomberlin’s instincts as a musician have gotten sharper and her curiosities more sprawling, if the upbeat drums on stunner “Wasted” are any indication. Part of that can be attributed to the eccentric touches of Alex G — a longtime musical hero of Tomberlin’s — who produced Projections. Last July, Tomberlin also moved to LA, gaining a closer community of friends and collaborators — among them Ryan Hemsworth, who also worked on EP closer, “Natural Light.”

Over the phone from a temporary home in SoHo, Manhattan — where she, and the family she often nannies for ducked to escape the west coast fires — Tomberlin caught us up with what it was like to work with Alex G, experimenting with synths, and coming to terms with her newfound visibility in the indie world.

You worked with Alex G for the EP. What was that like?

It's funny because I took my little sister to St. Louis — that's where I would drive two hours from where we lived in rural southern Illinois to go to see shows, and I think I was 19 or 18. It was when Beach Music came out. They were touring for that record. It was a small venue, so we met after the show and I have a really funny picture of me and my little sister and Alex and John, the bassist, standing and looking weary, hard and cool, because we were trying to be funny. It's kind of wild to look back at that and be like, “Oh, I'm working on music with somebody that I really admire.” Their work ethic and the way that they do things and the sounds that they make. It was just special but aside from that, we did a short tour in May, a week long tour. And we just really hit it off, like on a friendship level. That's the people that I want to work with, when I connect in a way that we have good communication and we're friends. It doesn't, for me, make sense, with I guess the kind of work that I make, to make it with strangers, even if they make really cool stuff that I admire.

How do you feel working with Alex shaped the sound of this record?

I think he offered up ideas that I wouldn't necessarily have thought of on my own. Like the drum beat on "Wasted" was totally an Alex idea. It made the song level up in a whole new way which was really cool. I was like, "This song definitely needs drums but I don't know what kind of vibe." And when he sent me a MIDI version of basically what's on the song, I was like, “This is so sick. Yes, let's follow this through.”

"Wasted" was a song I immediately identified as one Alex worked on. It's kind of the odd one out on the record. With your debut, people understood you as making introspective folk. Do you feel more ready to explore different sounds?

That's what's funny about a debut record. With me, At Weddings was very literally just songs that I had written and they were like my best attempts at songwriting. Then I realized that it was cohesive and I was like, "Oh this can be an album." But at the same time, it was an album for me to put on Bandcamp and share with friends. I wasn't knocking on labels' doors. Saddle Creek found it on Bandcamp when it was just 7 songs, and reached out to me. [At Weddings] was just a very different thing and those particular songs needed a lot of space in the production, I didn't want to mess with them too much. I wanted to make space for the mystical to exist. I had always wanted to do other things and I think even in one of my first interviews, I was like, “Tomberlin probably won't sound this way forever.” I'm always interested in exploring different musical colors, and experimenting. That was what I knew to do then and I think that just grows more and more as you grow as a person and your interests and stuff. Definitely open and always have been. It's just that record was that thing and now whatever comes next will be that thing.

What have you been listening to/experimenting with now?

I think I've always been interested in synths. I love a synthy situation. But I'm still writing on guitar just because that's what I always have with me. I also really want a piano, though I haven't really tried to track one down too hard. I'm also getting into learning how to record myself because all my demos have just been iPhone voice memo demos.

I'm just learning how to f*ck around MIDI or whatever, just like Alex does, and adding all this crazy instrumentation or pitching stuff down or clipping things and making music that way, which has always been an interest of mine, but I've been intimidated because I feel like a lot of people learn that stuff really young these days. With MacBooks and stuff, I just didn't have access to that when I was younger.

"With all the isolation that this year's brought, now the recordings just feel like old friends."

You wrote these songs during different times of your life. What's it like hearing them grouped together like this now?

I read some tweet the other day, somebody said [something like]: If art is how we decorate a space, then music is how we decorate a time, or how we mark a time. Or something. That really resonated with me. That's kind of how I want everything that I've released to feel. And that's kind of why I'm not really worried about churning stuff out constantly. I just want to be connected to it and be able to sing it when I'm like 50 years older. That's the kind of work that I hope to make. So I definitely feel connected to it but it's definitely a marker of time of what I was experiencing in those moments, which is always cool, and I can always connect to that playing live because it takes me back to those spaces and I live in that while I'm performing on stage. I don't really think about what else is happening. I guess that's a little bit dissociative in a way.

Now it's almost even more, like it feels warm to me. The recording feels warm. I can hear the chairs squeaking in some of the stuff. I can hear drum sticks rustling. With all the isolation that this year's brought, now the recordings just feel like old friends. We recorded in Alex's apartment too so it definitely takes me back to that and it's nice memories with friends. I feel connected to it in a more loving way than I probably would have being on tour and being stressed about it now. I'm excited to let people live in it.

You've got an audience listening to what you've been putting out. Has that affected your songwriting?

I think initially when that record was received well, I instantly had an onset of writer's block where I was like, "I can't do that again. How am I supposed to do that again?” That was just because it was being perceived by strangers and everyone was projecting on to me. But it was also just me learning to deal with the insecurities that I project onto myself.

Ultimately I just write songs because that's what I do and I like doing it and I do it for myself. If I go into it being like, "Oh someone's going to listen to this, and now I must write a song," like I can write something but it's probably going to be a piece of shit and I'm probably going to throw it away because I'm just already projecting also what I think other people are expecting or wanting for me, and that's not particularly healthy. I think [the increased visibility] changed the way that I view my own insecurities, and dealing with that, hoping to make those into strengths, or ego death. Who is to say that someone wants this from me, I don't actually know what anyone wants from me. All I can do is tend to myself.

Projections is out now via Saddle Creek.