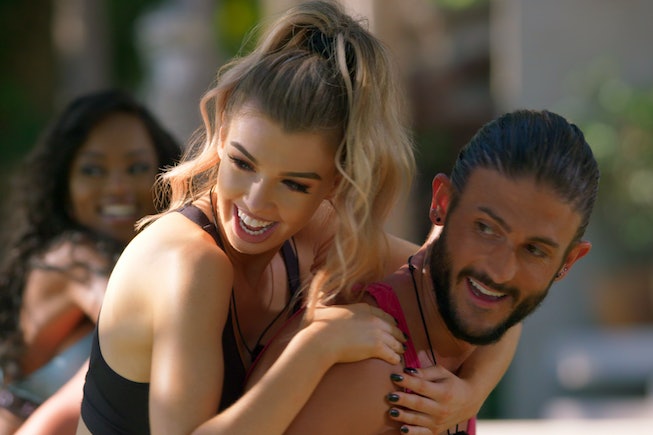 Every now and then, a show rolls around that inadvertently speaks to the cultural zeitgeist. It may not always do so directly, and oftentimes, its relevance to the current moment is purely coincidental. Nevertheless, in certain times of unrest, it can be comforting to find a piece of content that reflects our experiences back to us — intentionally or not. Enter Too Hot to Handle, the next entry in Netflix’s ever-expanding slate of unapologetically trashy so-bad-it’s-good reality TV that just so happens to have a lot to say about our current age of quarantine.

The show begins by bringing ten single men and women together on a beautiful island for “what they think is the most exotic summer of their lives.” It’s a premise that instantly recalls hits like the UK sensation Love Island or ABC’s shamelessly seductive Bachelor in Paradise, and just like those crowd-pleasers, Too Hot has made sure the men are all sporting a minimum of six packs and the women are all comfortable in a wardrobe entirely comprised of string bikinis.

But soon, Netflix’s latest reality series takes a turn. Twelve hours after their arrival, “Lana,” a cone-shaped “virtual guide” that lights up and lets off a faint chime when it wants to speak, reveals that despite their raging hormones, everyone would be forbidden from engaging in any form of sexual contact for the duration of their stay. That means no intercourse, of course, but the rule also restricts kissing, heavy petting, and (perhaps hardest of all) masturbation. Barring any rulebreaks, the contestants will receive a prize of $100,000 when it’s over. If they are unable to resist such acts, however, money will gradually be deducted from their grand total.

It doesn’t escape me that Too Hot to Handle is debuting more than a month into a government-mandated shutdown with no end in sight, a time for self-quarantining where many single men and women around the world have been forced to forgo sexual contact of any kind. Though there are clear differences between our current situation and that of the contestants on Too Hot — we are all socially-isolated from each other, and thus, far less tempted to “break the rules” than we would be when living with each other, foremost — the frustration that accompanies involuntary celibacy is a constant across both. In some ways, watching a bunch of people struggle to keep it in their pants is not all that different from chatting on Grindr with someone you can’t meet up with despite them being mere feet away.

Of course, while the rest of us have a moral imperative to keep our privates to ourselves, the singles on Too Hot are only required to answer to each other. There, the burden of chastity extends only as far as any one person’s willingness to prize a future payday over their present temptation and desire for sexual intimacy — it’s a tricky balance to maintain that unsurprisingly results in some people taking the assignment more seriously than others. As we are frequently reminded throughout the eight-episode season: Rules are made to be broken.

But as much as Too Hot revels in the frequent rule-breaking, it does try to posture as something more profound too. In the fifth episode, a mystical guru named Deva guides the men through “Warrior of the Heart,” an activity meant to teach them the power of vulnerability by forcing them to lather mud on each other’s bodies. What initially looks like an excuse to shove these hypermasculine muscle studs into an intentionally homoerotic corner soon evolves into something more powerful as they open up about their toxic traits while joining in for a group bear-hug. Similarly, the women participate in “yoni puja” (literal translation: vagina worship), which entails dropping trou, inspecting their vaginas with handheld mirrors, and painting pictures that pay tribute to them. It looks silly from the outside, but the collective chants of “girl power” that follow suggest that it might have been exactly what these horny singles needed to truly grow.

Like any reality show, Too Hot hinges on the charisma of its cast, and thankfully, these “beautifully naive wannabe reality stars” (in the words of narrator Desiree Burch) know exactly what to do for camera time. There are those who proudly embrace their role as villain (Florida sorority girl Haley and Canadian Instagram influencer Francesca instantly team up and delight in stirring up mischief around the house) and those that position themselves as the group’s moral center (Matthew, who is quickly nicknamed “Jesus” thanks to his angular features and gorgeous locks, admonishes those that refuse to take the process seriously). Some are easy to hate (London-bred Kelz asserts that “there can only be one” alpha male in the house, only to be out-douched by fellow Brit Kori, whose disarmingly good looks have clearly gone straight to his head) while others are impossible not to love (the bond that builds between Georgia native Rhonda and the emotionally-closed Sharron is unexpectedly sincere). Chloe, a self-described “ditzy” girl from Essex, is by far my favorite of the bunch. “It’s actually just hit me that this whole experience is, like, so deep, man,” she says more than halfway through the season. “It’s like we’re in sexual rehabilitation...but with our minds?”

If there is a downside to Too Hot to Handle, it’s the weird framing of the show’s rules, which appear to be being made up on the spot. In early episodes, the goal is to simply make it through their time on the island having as little sexual contact as possible. While Lana encourages one-on-one romantic bonding, there is little imperative to actually leave the island with a soulmate. But when a late-season announcement suggests that the grand prize could ultimately go to a singular “winner,” the remaining contestants begin to scramble, clearly confused about what “winning” means in this context. While everything ultimately works itself out, the last-minute attempt to build suspense (for them and for us) feels forced when it doesn't need to.

Besides, no one in this show’s target audience will be tuning in for the game-show aspect anyway. (Even the contestants seem to forget they’re in a competition half the time.) Netflix clearly sought to make a show that spotlighted self-absorbed, unnervingly attractive people forced into an unexpected bind — and on that front, they delivered. Like its forebears, Too Hot to Handle uses a seemingly altruistic mission statement as a cover to create something far more carnal in nature. And while there are certainly some questionable politics at play — nobody should be shamed for avoiding emotional connections, most importantly — at the end of the day, Too Hot to Handle does its job as a trashy reality show about hot single people struggling to control their hormones. Watching it right now, while there’s a good chance you are also horny and bemoaning your inability to indulge those desires, can be a surprisingly rewarding experience. Who knew projecting our sexual frustrations onto others could be so much fun?

Too Hot to Handle is streaming on Netflix today.