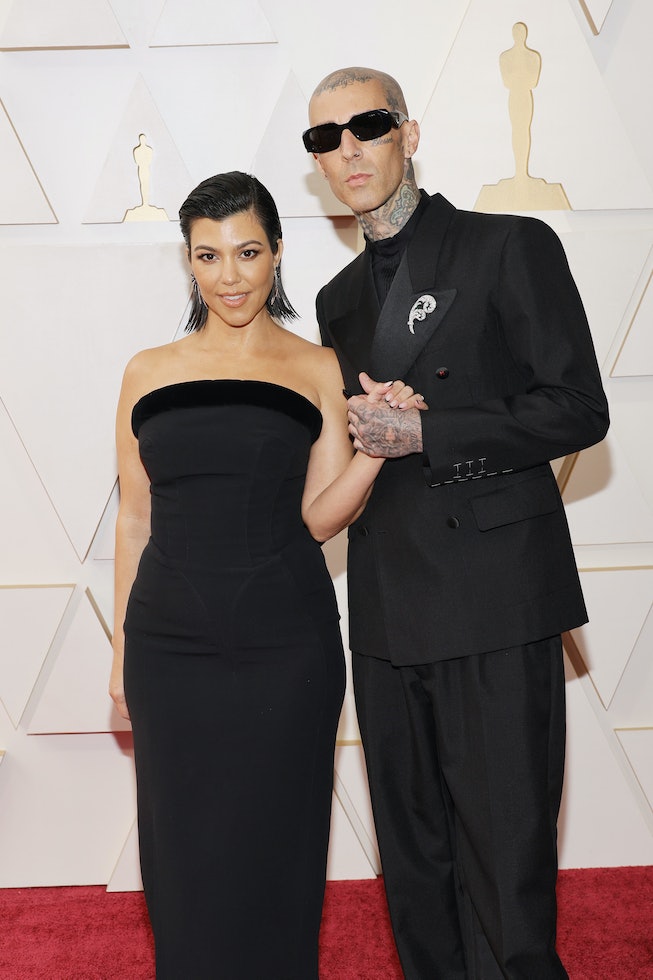 Like all of the best power couples, Travis Barker and Kourtney Kardashian have a penchant for matching one another. They kept their couple look streak going at the 2022 Oscars red carpet by both chicly arriving in black — Barker in a sharp Maison Margiela Icons black mohair-silk tuxedo (which he paired with black shades), and Kardashian in an understated but stunning black Mugler strapless gown and Aquazzura heels.

The two arrived on the red carpet with big smiles, even sharing a (tongue-filled) kiss for the cameras because, of course.

Barker is in attendance as a special guest for the 2022 Oscars. The Blink-182 member will be playing the drums during the show as part of the all-star band put together by the award show’s producers, Will Packer and Shayla Cowan. Barker will be playing alongside percussionist and singer Sheila E., and pianist Robert Glasper.

The three aren’t the only musical artists (outside of those that are nominated) who will be included during this year’s ceremony, which has teased more musical elements during the broadcast than its traditional inclusion of the Best Original Song performances. DJ D-Nice, most popularly known for his Club Quarantine parties during lockdown, will also perform, as well as The Samples, a vocal group led by Jason White.

After a subdued ceremony in 2021, this year’s Academy Awards is looking to be especially momentous with career-defining nominations for Kristen Stewart, Kirsten Dunst, Billie Eilish, and more. While there some were notable snubs in this year’s nominations (Lady Gaga for her role in Patrizia Gucci in The House Of Gucci, for one), it’s likely to still be a ceremony to remember with performances expected from Eilish, Beyoncé, and Reba McEntire.

The 2022 Oscars took place Sunday, March 27 at the Dolby Theater in Los Angeles. Regina Hall, Wanda Sykes, and Amy Schumer shared hosting duties for the ceremony. See the best looks from the red carpet here, and scroll on for more details on Kravis’ looks.