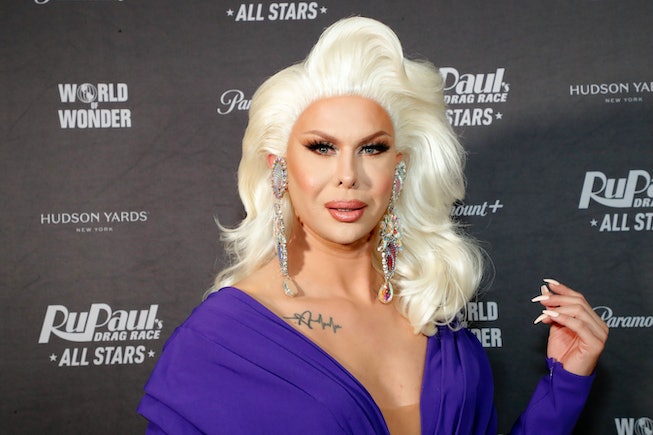 In season nine of RuPaul’s Drag Race, Trinity the Tuck (née Taylor) emerged as the queen with the most tricks up her sleeves. A native of Birmingham, Alabama who now resides in Orlando, Florida, Trinity was quickly boxed in as the season’s resident “Southern pageant queen.” With her clear drag polish and enviable tucking skills on full display each week, she was already looked at as one of the season’s strongest competitors. But what no one could anticipate was just how much more Trinity had to offer in non-pageant areas, like acting, comedy, and improv. Week after week, however, Trinity revealed a new skill, surprising everyone in the competition (herself included). Before it was all over, she had made it all the way to the finale, where she finished as a finalist.

Trinity didn’t wait long to return to the competition to redeem herself either, joining the cast for All Stars 4 within one year of the season nine finale. Determined to earn her spot in the Drag Race Hall of Fame, Trinity stormed into the competition with her game-face on, winning four maxi challenges, and eventually, emerging as the season’s overall winner (alongside Monét X Change, in what is still the franchise’s only double-crowning).

Now, Trinity is competing on Drag Race for the third time, as one of eight contestants in the first-ever all-winners edition of All Stars. But while the undeniably talented queen is still dominating, she stresses that one crucial thing has changed about her approach this round: she no longer has anything to prove. With three wins and two Legendary Legend stars to her name, she’s currently in a tie for second place. But to hear her tell it, she isn’t overly concerned with the competition itself (though she does still want to win, because who wouldn’t). “I am 100% happy with what I've done with my career. I don't think there's anything left for me to prove,” she recently told NYLON. “Going back [a third time], I really just wanted to have fun.”

Ahead of last week’s episode, NYLON hopped on a Zoom call with Trinity The Tuck to talk about killing the competition, setting the record straight about her relationship with Monét X Change (they’re close friends), why she doesn’t think she’s “super skilled” at sewing, being a sarcastic dad-joker, and the power of chosen family.

So, we're now on episode seven. How have these past few weeks been for you?

I mean, fantastic! I've been killing it every week. Hello?

You didn’t lie! Speaking of, this week was a design challenge, and you famously won the last one, which you said just added extra pressure. Do you think that pressure was specific to design challenges?

No. I've excelled at almost every type of challenge that has been on Drag Race, so I don't think that I'm just expected to be good at design. I've won a makeover, I've won acting challenges, I've won Snatch Game. So there have been tons of different types of challenges that I’ve felt a lot of pressure to live up to coming into All Stars 7.

Well, pressure or not, you ended up winning the challenge, as well as the Lip Sync For Your Legacy. So congratulations are in order. How did that feel?

I felt awesome. You know, I really wanted another win. I felt like I needed to catch up to some of these other bitches and I was just really glad to get that affirmation from the judges.

The gown you made for the challenge is absolutely incredible. When and how did you get so skilled at sewing?

I wouldn't say that I'm super skilled at sewing. I feel like I'm a self-taught seamstress. I don't have any technical training. I'm not very good with patterns. I just know what I know how to make and everything else is kind of an experiment. I just know how to roll with the punches to make something look good, even through the mistakes. So that's how I did this design: I wanted to do a silhouette that I know how to make, but I did try some things that I had never tried before, and luckily for me, it worked.

The win feels even more momentous because of how much help you gave to the other queens. You made that entire gown and still had time to assist on other garments? Impressive. On the Main Stage, you said you helped the girls in an effort to avoid getting blocked in the future. Was that really a strategy you were considering or was it a joke and you were really just helping because you’re a helpful person?

Oh no, that was all a joke. One thing I find is that people tend to take my words as the Bible, rather than what my humor is. I'm very sarcastic. I'm a dad-joker. I make stupid humor. So me saying that on the Main Stage was mainly just a joke. I would never help someone to get something back out of them. I don't do things with expectations. I genuinely just wanted my friends to do well.

In Untucked, you talked about the power of chosen family. Do you think the importance you place on that and your desire to help others are connected?

I definitely feel like, for the most of us, being a queer person puts you in a position to need to find chosen family. Even if you have family at home, you still need to find a tribe that you relate to, that you can have joint experiences with, and that know what struggles you go through. So with these girls, we are all going through the same thing. We all have gone through the same thing in our lives, for the most part. And that's what makes competing with these queens so much better — it’s because we are friends, we are family. We have chosen to be in each other's lives, as friends and as sisters.

Going off that, I wanted to talk about Monét X Change. So many members of the Drag Race fandom have spent the past few years trying to invent this rivalry between the two of you because you both were forced to share the spotlight after your All Stars 4 joint win. But one thing All Stars 7 has done very well is to lay all that hearsay to rest. Here, it’s so clear how close you guys are and how much mutual respect you both have for each other’s drag. Did this season feel like a reunion for the two of you?

Oh, girl, these fans… This fanbase is so… We have one of the most enthusiastic fanbases of any fanbase out there. We have some amazing fans, but then we have some intense fans and they love to create these narratives for people. They love to read into things that you post and twist them into a narrative that they want for you. One of those has been, Oh, there's a rivalry, when there's never been a rivalry. We weren't that close on All Stars 4 because we didn't really know each other before. But after we won and got to tour, we got to know each other more. Now, I love Monét. I think she's hilarious, I think she's super talented, and going back to compete with her was just fun. So, yeah, it was kind of like a reunion.

Most queens go back for All Stars with something to prove, or at the very least, to show off something new for the fans. What would you say you most wanted to accomplish by coming back for a third time?

Oh, I had nothing else to prove. I don't feel like I have anything else to prove. In the 20 years that I've done drag, I've accomplished so many things — so many more things than I ever thought I would have — and I am 100% happy with what I've done with my career. I don't think there's anything left for me to prove to anyone else, and if someone else feels like I do need to prove something, then that's on them. I am 100% happy with what I've done. Going back, I really just wanted to have fun.

What would you say has been the key differences from each of your three experiences on the show?

I think the first experience was [defined by] just not having the experience of Drag Race, not knowing what to expect. So going into it, I went into every episode scared and frantic, like most girls are. Then, for the second season, I did feel like I needed to prove something. I felt like I needed to win because I needed to show people that I could do it. But then, this time around, it's more of like, Okay, been there, done that. I would love to win, and hopefully, I will. But regardless of if I do or not, I went in with the number-one goal to have fun and share this experience with my sisters.

What has been the most rewarding part about this entire experience?

I think it’s just like I said — just the experience with these girls, because we are all very close. We all were friends before we went into All Stars 7 and I think that this just brought us even closer. Also, getting to channel the energy that you feed off of other creative, talented people that are on the same level as you just motivates you to do even better. So that's that.

New episodes of RuPaul’s Drag Race: All Stars premiere every Friday on Paramount+.