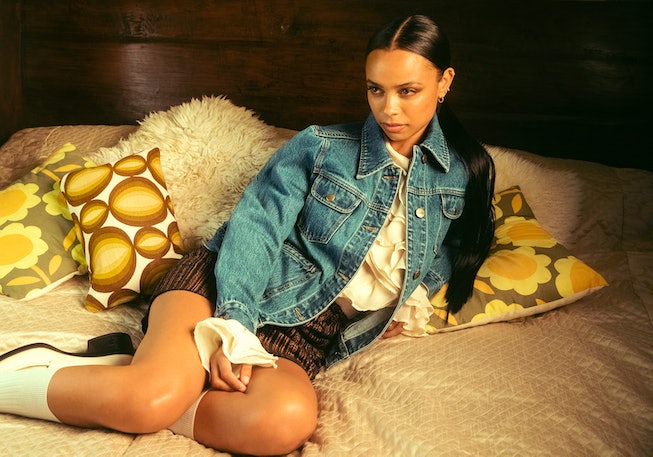 TSHA’s 2020 EP Flowers opens with a song about finding her long lost sister. Aptly titled “Sister,” it sounds like spring, with delicate piano dancing among a clearing of bright electronics and joyful, emotional singing. I nearly cried the first time I heard it — not because I knew anything about its backstory, but because I could feel it in the music anyway.

It’s these stirring, emotive qualities of her dance music that have led to the London-based DJ and producer’s profile skyrocketing over the past year. Though she only began releasing her own music in 2018, she’s become a hot commodity in the global dance scene, racking up collaborations with Diplo and Aluna, creating remixes for Ellie Goulding, J Balvin, and Foals, and DJing afterparties for some of fashion’s biggest houses. It’s not hard to understand why people are responding to the often lush, joyous sonic palettes that she chooses. Like the feeling of finally returning to the dance floor, her songs are all about release.

Now, gearing up to share her debut album, Capricorn Sun, on Oct. 7, TSHA is taking stock of the long way she’s come since 2020. “Some of my five-year-plan [goals] were achieved in a year or two years,” she tells NYLON over Zoom, still in awe.

Below, NYLON chats with TSHA about her rise, meeting Kanye at a Burberry afterparty, and her favorite song from Capricorn Sun.

Everyone in the underground dance scene has really seen you skyrocket over the last few years. What has that experience been like for you?

I saw a video of you and Kanye playing at a Burberry party which I imagine was also a surreal moment. Can you tell me the story behind that?

I was DJing the Burberry London Fashion Week afterparty and I'd seen that Kanye was at the show, but I didn't expect him to be at the party. When I got there I saw Kanye just around the [DJ] decks and stuff, and it was quite funny because I had to push through everybody to get to the decks. I think everyone thought I was pushing to see Kanye, and I was like, “No, no, no, I'm the DJ.”

I got to the decks and I'd said hi to Ricardo [Tisci] and Kanye was there and he looked at me so I was like, "Oh, hey," and he was like, "Hey." And then he left and then I started DJing. I thought, “I just met Kanye. [It was] a brief hello, but that's wicked.” At some point in my DJ set I was playing a song called “Chicago Gangsta” and it was just a house song. And he came running over out of nowhere and was like, "I love this bit." And I was like, "Oh, you like that? Yeah it's cool." And then he was like, "No, no, no, no. Go back." I was trying to find a way to do it where it didn't mess up everything. I ended up just wheeling it up and looping it and then everyone came round and then he was just vibing out. But it was a surreal moment because it was just one of those people who you never think you would ever cross paths with.

“If I feel in the room and it's making me feel a type of way, I'm excited to share that with someone and let someone else feel that as well.”

Your dance music is often described as very emotive and emotional. When you're making your songs, are there specific qualities or ideas that you're trying to capture?

Sometimes there is and sometimes there isn't. I think my natural mood pours into [my music] or what's happening around me or whatever. But definitely I'm always looking for a euphoric feeling. I think I'm quite an emotional person so I think naturally everything is quite emotive, just because that's how I am. Even though I can do stuff that's a bit different to that, I just like that stuff. If I feel in the room and it's making me feel a type of way, I'm excited to share that with someone and let someone else feel that as well.

When you say you’re looking for euphoria, can you tell me more about creating that in your music?

I do a lot of building, I guess, builds and intensifies and I quite often have a crescendo moment at the end. All my songs really have a turn of events so the end it gets really intense. The song's a journey, it starts off gentle and then it builds into something really energetic. And even in the darker songs, there's some euphoria in it and like I said, it happens naturally. And I think also from my experiences in club culture and stuff like that, I’m understanding what sounds and what things happen to people's brains when they're out or they've had a night out. I know which spot to hit.

Who are some musicians that inform your music?

People like Bonobo's sound influence me. He's the first artist that introduced me to that more emotive sound and the use of organic sounds as well as electronic sounds. Artists like Four Tet or Jamie xx or, I don't know, some of Floating Points' stuff. It's not so emotive but he definitely good at creating euphoria. All those artists had a little bit of an influence on how I approached music and how I thought of it.

Something that I love about Capricorn Sun is your use of voices and the features that you include. “Water” features the Malian Griot singing tradition. When did you first hear Griot singing and what drew you to it?

Well, I actually first heard it on this pack that had griot songs in it and I just fell in love with the raw emotion in the vocals. I couldn't actually clear that sample originally, thank God, but it led me to contact a lady called Lucy Durán who was a professor of West African music and she taught me all about the tradition, the storytelling, how it was how they handed down their history through song. And that made me fall in love with it even more, which led me to do the song “Demba” on Flowers EP. And I just think they've got the most beautiful voices and cadences in the way they sing.

Your album title Capricorn Sun tells me that maybe you dabble in a bit of astrology. What about being a Capricorn really resonates with you?

I guess a Capricorn is hardy. I think we, like the goat, we go through a lot and we're resilient and I feel like I'm resilient. A Capricorn's stereotypically quite hard working and I feel like I've worked really hard getting to this point. And also some of the sillier elements of it where a Capricorn's supposed to not like... They like to work on their own because they think other people are going to mess it up. I am a bit of a perfectionist, I like schedules and I like deadlines and stuff like that and I'm like, that's kind of me, unfortunately. Boring but that's me. I'm also a Virgo moon, which apparently makes me super organized.

Is there a song on the record that you feel really captures that essence?

“Time” is my favorite song on the record. I think that I wrote that when I was alone and I was feeling relaxed. It really does feel like a song that represents me.

TSHA’s ‘Capricorn Sun’ is out Oct. 7 via Ninja Tune.