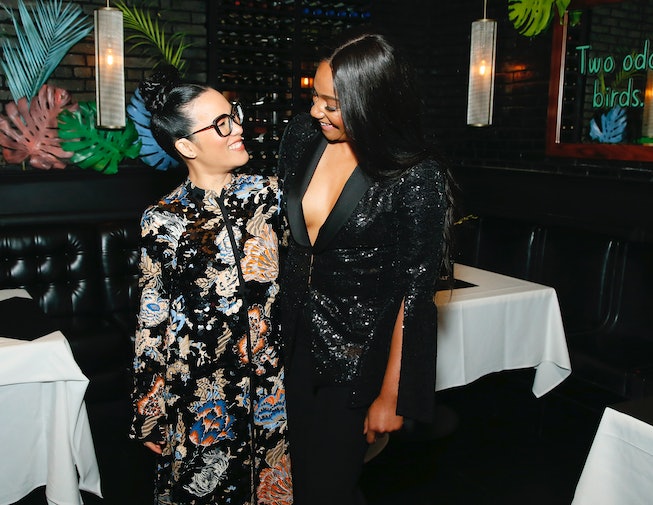 In this Sunday’s second season finale of Tuca & Bertie, our titular birds — the former, a free-spirited toucan; the latter, a tightly-wound songbird — finally find their way back to each other. In the preceding episodes, the bond between the once inseparable pair seemed to fracture after Tuca, long the love-averse sexually-free bachelorette, entered into a relationship with a nurse named Kara. Suddenly obsessed with spending every waking second with her new lover, Tuca largely abandoned Bertie, leaving the already sensitive songbird alone, with nobody to talk but her preoccupied therapist. But when a spontaneous flood forces the estranged best friends to spend a night searching for dry shelter together, they are left with no choice but to talk through the myriad problems that led to their untimely separation in the first place.

Tuca & Bertie has always been a lighthearted show about serious issues. Created by Lisa Hanawalt, the illustrator responsible for BoJack Horseman’s inventive animation, the series, much like its predecessor, is particularly adept at using multi-layered humor to probe some rather dark topics. Its first season alone confronted matters of sexual assault, sexist treatment in the workplace, and alcoholism. These conversations continue in its recently-concluded second outing, but it also introduces some new ones: depression, the shortcomings of cancel culture, toxic relationships, and how to properly deal with the impending loss of a loved one.

For stars Tiffany Haddish (who voices Tuca) and Ali Wong (who voices Bertie), getting to tell stories like this is part of the central appeal of working on this show. After Tuca & Bertie was canceled by Netflix in 2019, only to get revived by Adult Swim the following year, the actresses developed an even deeper fondness for their series. They agree it’s important not just because it facilitates these important discussions, but because it does so while also centering women’s perspectives. As Haddish says about herself and her co-star, “We are some strong women!”

With Tuca & Bertie recently being renewed for a third season, NYLON hopped on a call with Ali Wong and Tiffany Haddish to talk about the series. As the stars played around with all the filters available to them through Zoom, they opened up about switching from Netflix to Adult Swim, how their own friendship mirrors (and doesn’t mirror) the one shared by their characters, bringing more queer representation to the world of adult animation, how they, as stand-up comics, deal with many of the same issues their characters do in terms of predatory men, and that one time they went on a trip together together to Yellow Springs and “cut the fuck up.”

Netflix canceled Tuca & Bertie after its first season, and before Adult Swim stepped in to save the day, you had no idea what the future of your show was going to be. Given how many people (including critics) loved it, how did you feel during that in-between period?

Haddish: I don’t know. It was like when your dude goes to jail and you don't know if he’s going to get out, if he’s going to win his case or not. You don't have enough money to bail him out so you can spend time with him, so you just pray that he’s going to get out and that he’s going to win his case. And in the meantime, you try to come to the court everyday looking super cute so the jury can see that you love him and that what he did was not that bad. And then, he just gets released, let off with probation or something like that, and you’re like, “Alright, yes! Now we can make this work!” That's what it felt like to me.

Wong: For me, [getting picked up by Adult Swim] felt really good mostly because Lisa [Hanawalt] is such a talented showrunner and has such a unique voice and such a great point of view. She's so passionate about this show, so I think it was just so important for someone like her to keep creating the show, you know? I was very, very happy about that.

Lisa is a veteran from BoJack Horseman, which obviously feels similar in style to Tuca & Bertie. But what I love about this show is that it tells such a distinctly feminine story about very women-centric things. Yet, at the same time, it’s an adult animated comedy, which has historically been a playground for men telling masculine stories. How did it feel to be involved on a show that was so inherently groundbreaking for its genre?

Wong: It always felt so special. And correct me if I’m wrong, but I don't think there are — or at least I can't think of any — other adult animated shows where the leads are two women of color.

I don’t think there are many other adult animated shows where the leads are women at all.

Wong: Exactly. But also, the show's just great. I mean, representation of course matters, but it only matters — or it extra matters — when it's quality. This show is great. There are so many hidden jokes in the animated sequences too, one that aren’t even written on the page. It’s just a real layered experience watching the show. I’m sorry, I forgot what your question was.

Just how it felt for you to be involved in this show.

Wong: Constantly honored. And Tiffany's so busy! We’ve always wanted to do something together. There have been talks of many projects over the years, but this is the one opportunity where we’ve actually gotten to work together. It's just a fun excuse [to hang out]. Even to see Tiffany now virtually is very fun — just to fuck around with her and all these filters, it's delightful.

Then, we do Tuca and Bertie and I'm like, “Cool, we're on Netflix.” But then, Netflix let us go, and I'm like, “Oh, we’ve got to get to Adult Swim!” That was the only thing I could think. To be telling these stories that are outrageous but still based in reality — that's where I come from. I'm a little outrageous, but everything I do is based in truth, right? Sometimes, I can be a little over-the-top, but, hey, that's when you have fun! That’s when you have a good time! So this show, to me, is where I get to play. I get to tell true stories, show true feelings, and I get to work with my friends. It's so awesome. Nicole Byer is in [this season]. So many of our friends are on this show, and to be able to get people of color involved [is great]. For us to be the leads — yes, we're the leads! Ali Wong and Tiffany Haddish are leading this thing! We are carrying this baby and we are some strong women — and we're going to carry it to the top, honey!

You’re right, this show is very rooted in reality — and that leads to some rather dark storylines, such as this season’s continued exploration of the aftermath of sexual assault. I was surprised to see this show address how easy it is for abusive men to be redeemed in society after allegedly being “canceled” for something serious. Given how true to life and relevant that is, was it hard to tackle that subject through the lens of comedy?

Wong: I mean, it's easier to do that than talk about it in an interview. You know, on the show, we're playing these characters and we have the support of all of these writers who have thought about it a lot. You know, Lisa is so thoughtful about it. We were lucky enough that they had thought about all these things and contextualized it in this way that felt right and true to them. So for me, because we trust them so much, it was not difficult at all.

Haddish: For me, it was easy-peasy. I mean, Ali, let’s be honest, we deal with a lot of men in our field as stand-up comics who have done some, nasty, nasty, disgusting, nasty stuff. But because they can tell a good joke, they are forgiven. And we have to work with them sometimes! And I stand by and I watch. I’m like, “I know he needs to be in jail, and if he says one thing to me, I’m telling everybody.” But let me shut up. I just lightly snitched.

I was excited to see the show dive more into Tuca’s queerness this season. It was hinted at in season one, but this season, we can actually see Tuca dating as a queer woman.

Exactly. How was it for you to play that out? Adult animation hasn’t always had the best LGBTQ+ representation. In fact, many older shows could be downright homophobic.

Haddish: It was fun to do. In my actual life, I haven't felt [queer], but who knows? I've always told everybody that I'm 50 dates away from trying the other side. I’ve got two dates left — two more heartbreaks and I'm going to bring on the vaginas, bring on everything. Let's see what it do! So it was really fun to play that. I know a lot of women who go through [what Tuca goes through this season] — like: Is this where I should be? Is this who loves me? Can I love this person?

Wong: They just miss your friendship! You can't just throw away your best friend because you're in love, but so many people do that. But that's not necessarily a queer thing, that's just a relationship thing — and that's one of the things about the show that I really love. Anyways, sorry, Tiffany, keep going.

Haddish: No, keep going, girl! You know I love it when you chime in!

This show has always explored issues of codependency, but I like how it kind of flips this season. The first season focused a lot on how Tuca was adjusting to Bertie moving out of their shared apartment and in with her boyfriend, while season two switches gears to show how Bertie responds to Tuca getting a girlfriend. Talking with the two of you today, I can see how much chemistry you share with each other — how do you play out a dynamic that slightly mirrors your own friendship, but obviously to a much unhealthier degree?

Haddish: Well, for me personally... [drops voice by several octaves] I let my man side come out. That’s how I deal with things, you know. That’s when I bring Katrell out. That's when Ali feels most safe. That's how we make it right. Ain't that right, baby girl?

Haddish: See how she's fanning herself? That’s because she knows what it is!

[laughs] And Ali, what about you?

Wong: I mean, I don't know how to answer that. We don't work together in the booth ever. It's all very separate. So I just see our voices together [in the episodes themselves]. When we're actually working together, it's doing stuff like this or shooting promo for the show.

Haddish: Or we go on trips together to Yellow Springs and cut the fuck up! But no, we don't talk about that in these streets. [whispers] We don’t talk about that...but we cut up. Just trust me.

Wong: But Tiffany and I also have a very healthy friendship that's not codependent. We check-in with each other when we can, but in reality, we don't get mad at each other for not speaking for a bit. But when we do talk, it's very real — we get into family, relationships, marriage right away. So it's very different. We’d be like Tuca and Bertie maybe 20 years from now, when Bertie has kids and is married to Speckle.

You can watch all of Tuca & Bertie season two on Adult Swim now. Season one is on Netflix.