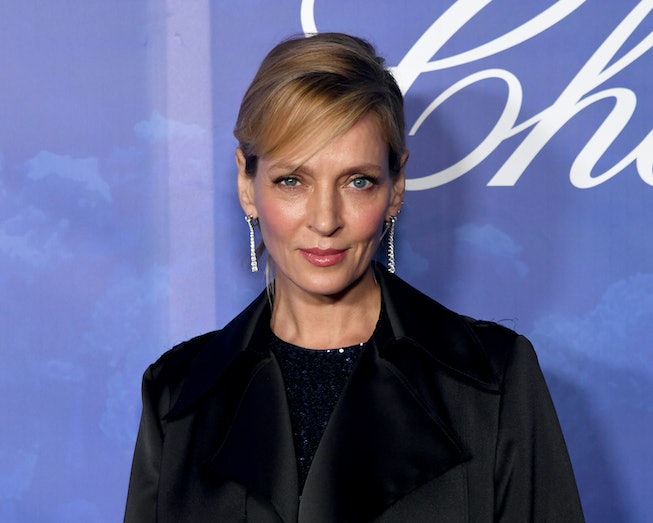 Uma Thurman shared her experience terminating a pregnancy in a personal essay for The Washington Post. Following the new six-week abortion ban made into law in Texas — which is currently the strictest in America — the actress expressed her support for a woman's right to choose.

Thurman said the policy is “something akin to horror,” and said she felt compelled to speak up after learning about it. “In the hope of drawing the flames of controversy away from the vulnerable women on whom this law will have an immediate effect, I am sharing my own experience,” she wrote.

Texas’ Governor Gregg Abbott signed the law in May, and it’s now going into effect statewide. The ruling forbids women from getting an abortion after around six weeks, which is often before someone realizes they are pregnant. The law also penalizes doctors for providing the procedure after the six-week mark, and allows anyone to sue someone who aids in an abortion, including Uber or Lyft drivers taking women to clinics. There are no exceptions for victims of rape or incest and, according to The New York Times, later abortions are only permitted if the pregnancy endangers the mother’s life. Even then, the likelihood of that happening is limited and at the doctor's discretion.

Thurman explained that she, like many women, got pregnant unknowingly. “In my late teens, I was accidentally impregnated by a much older man. I was living out of a suitcase in Europe, far from my family, and about to start a job. I struggled to figure out what to do,” she wrote. After calling home, she realized that motherhood wasn’t a viable option. “I was just starting out in my career and didn’t have the means to provide a stable home, even for myself,” she said. “We decided as a family that I couldn’t go through with the pregnancy, and agreed that termination was the right choice. My heart was broken nonetheless.”

Following her abortion, Thurman went on to have a successful career, famously starring in the films Kill Bill and Pulp Fiction among many others. That success, in part, due to her ability to make such a personal choice about her life's path. Years later, Thurman did have kids, but on her own terms.

“I conceived my beautiful, magical, children with men whom I loved and trusted enough to dare bring a child into this world. I have no regrets for the path I have traveled. I applaud and support women who make a different choice,” she wrote. Adding, “The abortion I had as a teenager was the hardest decision of my life, one that caused me anguish then and that saddens me even now, but it was the path to the life full of joy and love that I have experienced. Choosing not to keep that early pregnancy allowed me to grow up and become the mother I wanted and needed to be.”

The actress concluded her letter with a message to the women affected by Abbot's decision: “To all of you — to women and girls of Texas, afraid of being traumatized and hounded by predatory bounty hunters; to all women outraged by having our bodies’ rights taken by the state; and to all of you who are made vulnerable and subjected to shame because you have a uterus—I say: I see you. Have courage. You are beautiful. You remind me of my daughters.”