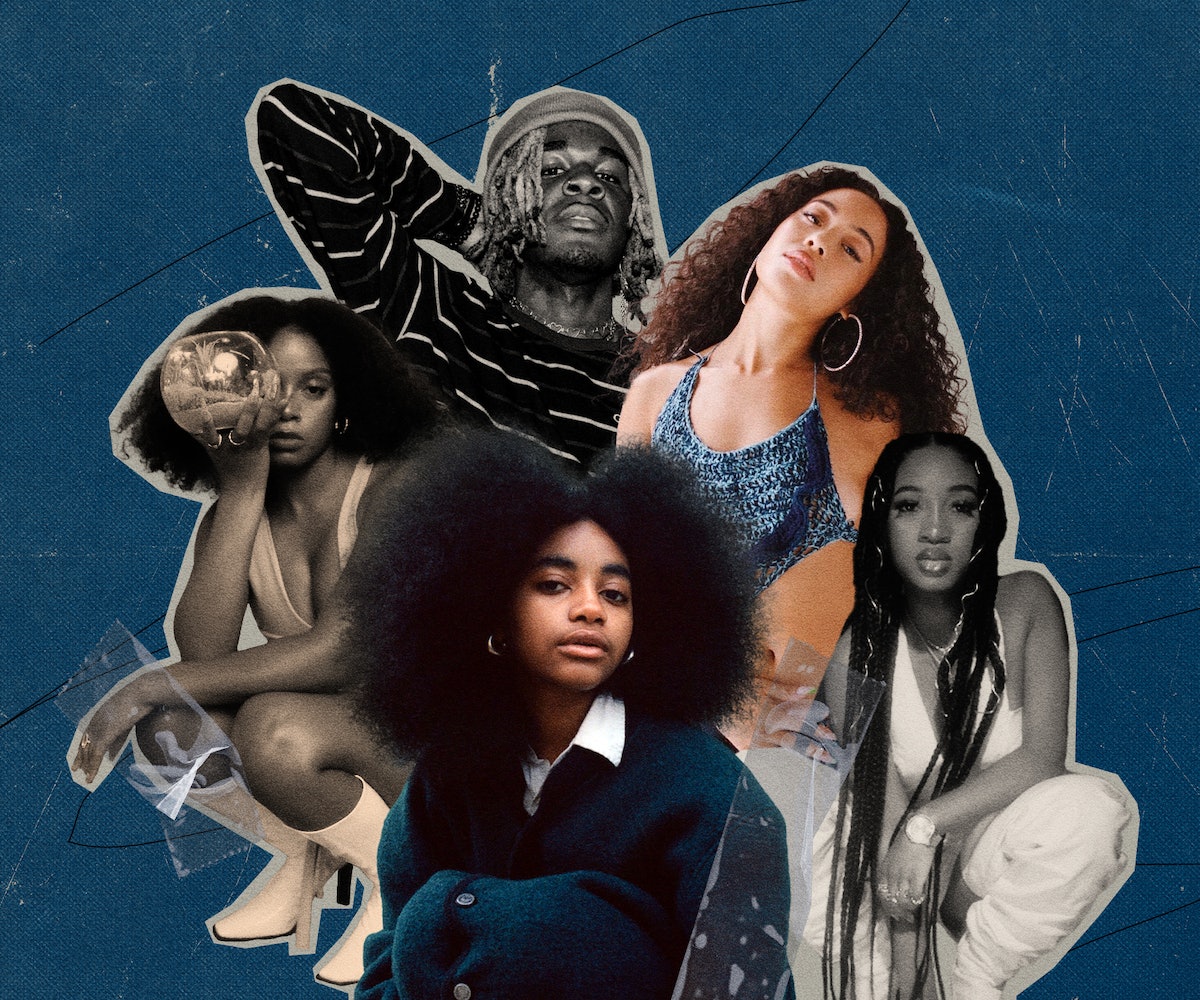 As the world kicks off another Black History Month, NYLON has rounded up some of the brightest Black musicians and artists on the scene right now — to root for, to fall in love with, and to shine a light on. Unconstrained by genre, these artists make music that ranges from glamorous country (O.N.E. The Duo) to heavy punk-rock (HO99O9), to throwback R&B (Joyce Wrice) and lo-fi bedroom-pop (flowerovlove). There’s no style or sound untouched on this list, so dive into our 17 picks, below.

Who: This certified hitmaker for the stars — a songwriter who’s written for the likes of Ariana Grande (“positions”), Lady Gaga (“Rain On Me”), Cardi B (“Ring”), Summer Walker (“Come Thru”), and more — has embarked on her own solo journey with the release of her 2022 debut project, Don’t Say I Didn’t Warn You.

What: Nija’s sound is a smooth blend of pop sensibility and warm R&B emotionality, but it’s her no-nonsense lyricism (and suave delivery) that lingers with you at the end of the day. She’s no sucker for games on standout “Finesse” — “But I know it's just finesse, finesse/ Always in my phone, soon as I move on” — and the gamemaster on the catchy “Beautiful Lies” — “I might say the things that you wanna hear/ Talkin' nice in your ear.” Either way, her confidence is contagious.

What’s next: TBA, but you can stream Don’t Say I Didn’t Warn You in the meantime.

Who: Barbados-born singer Amanda Reifer is the country’s latest promising star vying for a crossover, and a recent signee to Republic Records.

What: After commanding attention with her bouncy and opulent 2020 jam “Rich Bitch Juice,” Reifer has cemented herself as one to watch with her first single on Republic, “Bag,” an airy, dance-y track with a tropical twist about getting green that highlights her clarifying vocals.

Who: Ai Bendr is the 18-year-old pop crooner on the rise who’s rumored to be a favorite of Hunter Schafer, and has had her song “Love Me Low” featured on Euphoria.

What: Bendr’s tender and emotive vocals is what stands out in her songs, from a soft whisper to stretched into a silvery falsetto on the piano-laden “Love Me Low,” and layered into a warm chorus of harmonizing on the bouncy, upbeat track “Coffee.”

What’s next: She most recently released the single “I Never Learn.”

Who: Rachel Chinouriri is the London-via-Zimbabwe alt-pop singer who crashed onto the scene in 2018 with the stark, solemn guitar ode, “What Have I Ever Done,” and the slowly-expanding ballad “So My Darling.”

What: Though she made her introduction with simmering, intimate ballads, Chinouriri has since sped up the tempo with upbeat selections “Adrenaline,” and the funky, percussive-centered 2021 track “Darker Place.” Her haunting vocals, like a spectral hovering over all of her songs, however, remains the stunning constant amid it all.

What’s next: Chinouriri recently released an acoustic version of her “So My Darling.”

Who: 22-year-old Staysie Atoms is the eccentric Memphis rapper whose chaotic and very internet-age song titles — like, “i’m full of spite mane im too fucking petty” — have been bubbling up in the corners of Soundcloud.

What: Irreverent and largely created spur-of-the-moment, Atoms’ music feels like a meme page condensed into audio form, with many of her songs featuring altered, helium-like vocals and lyrics like, “Don’t call me wifey cuz that sh*t is threatening (Ew).”

What’s next: TBA, but keep an eye out on her very active Soundcloud page for new releases.

Who: Hailing from Georgia, KALI is the cool-voiced rapper who’s already collaborated with artists the likes of City Girls, Latto, Rico Nasty, and ATL Jacob.

What: Kali’s biggest hits, 2021’s “MMM MMM” with ATL Jacob and debut album standout “Do A Bitch,” have already positioned her as a distinct voice in the already crowded field of rap with her husky deep flow and unbothered delivery. “Talk to me nice or don't speak at all,” she commands in a tone as cool as ice on “Do A Bitch,” harnessing the energy we’ll be channeling for the rest of the year.

What’s next: KALI will be touring the U.S. as an opener on Latto’s upcoming Monster Energy Outbreak Tour kicking off in March 2022.

Who: A mother-daughter country duo with long roots in music, O.N.E. The Duo is Tekitha, of Wu-Tang Clan fame, and Prana Supreme Diggs (RZA’s daughter).

What: Though they hail from the hip-hop scene, O.N.E. The Duo sing in the country tradition, their newest single “Guilty” being a scandalous story about pulling their trigger on a man in self-defense. “What's a girl supposed to do/ When a man comes after you/ Push come to shove I won't back down/ I was raised to stand my ground.” With its creeping subtle beat and their harmonizing voices, the song is a glamorous and exciting addition to the genre.

What’s next: They recently released their latest single, a cover of “Ain’t No Sunshine.”

Who: HO99O9 is a New Jersey-based punk group made up of members theOGM, Eaddy, and Brandon Pertzborn. They’ve amassed a modest following since garnering attention with their crazy live shows around 2014 and most recently worked with Travis Barker on the 2022 single “Battery Not Included.”

What: The music HO99O9 makes has drawn comparisons to Death Grips, Black Flag, Bad Brains, and more: all raging, thrashing production and growling, guttural verses about street power and living in a horror-filled country. Their Barker-produced single is a 3-minute frenzy of electronica, crashing drums, a melodic interlude, and wailed lyrics — a whiplash concoction that one YouTube commenter calls the “most delicious musical stew I've ever tasted.”

What’s next: The group is gearing up to release their sophomore album expected in 2022.

Who: Rakiyah is an R&B singer based in South Korea who sings in both Korean and English, and is an actual rocket scientist.

What: The New Jersey native released her first English-Korean single, “Like You,” in 2020, a swirling, intoxicating track about falling in sync with a new crush. Since, she’s followed that up with her 2021 EP Into The Cosmos, a set of four romantic and plush tracks and another English-Korean single with Korean artist J.cob. But no matter what language she’s singing in, her delicate vocals reign supreme.

What’s next: She recently released the latest single “1-800-MLKYWY.”

Who: The multi-instrumentalist, singer and Pasadena-native Fana Hues has had a meteoric rise since she began releasing music in 2020, scoring a coveted feature on Tyler, The Creator’s 2021 record Call Me If You Get Lost.

What: Her gentle voice can be heard drifting through the background of Tyler, The Creator’s “Sweet/I Thought You Wanted To Dance,” though in her own music it’s the angelic foundation to her radiant blend of soul and R&B. On songs like “Breakfast,” and “Yellow,” her malleable croon is the star whether against languid blues or jazzy, Sunday morning soul.

Who: Despite her age, this 16-year-old South Londoner has been making waves in the music and fashion industry, having walked in Paris Fashion Week and starred in campaigns for Gucci and Pangaia.

What: Flowerovlove’s earliest singles danced in the lo-fi bedroom pop soundscape with simple synth melodies and her own sweetly-sung vocals, though, lately, she’s branched out into scrappier, lo-fi rock. Her biggest song to date, 2021’s “Malibu,” was a different sound altogether, a lazy, trap-flourished bop about her fast-paced lifestyle: “Double mag call to shoot/ Catch a flight I had to zoom/ My uncle on the phone/ With Naomi too.”

What’s next: TBA, but she released her latest single “I Love This Song” in 2022.

Who: Dutch-Zimbabwean musician Rina Mushonga calls herself a “global citizen” thanks to a nomadic childhood that brought her India, Netherlands, Zimbabwe, and now London. Her exciting concoction of dance music, dancehall, and afro rhythms is a reflection of that history.

What: Armed with rich, earthy vocals that’s been compared to Tracy Chapman, Mushonga’s songs unfold like memoiristic vignettes, fusions of different sounds and beats like a vibrant whirl of memories. Her unforgettable 2021 song “To Be The Birds,” is a triumph of resistance written in the wake of the 2020 George Floyd protests. Like its title, it captures that inexplicable rush of taking flight.

What’s next: TBA, but she recently released the single “Everything = Personal.”

Who: First discovered by Fleet Foxes songwriter Robin Pecknold, the Nigerian-born, NYC-based singer-songwriter has now blossomed into an artist in her own right.

What: Since her dreamy vocals opened Fleet Foxes’ 2020 album Shore, Uwade has buffed up her own catalog with a beautiful folk cover of Edo singer Sir Victor Uwaifo’s “Lodarore,” sunny guitar songs, and a glitchy electronic track called “Do You See The Light Around Me?”, all of which highlight her mesmerizing voice.

What’s next: Catch Uwade on tour with The Tallest Man On Earth this spring 2020.

Who: Indii G is the Louisiana rapper whose diaristic raps have brought him collaborations with Powfu and Houston rapper SadBoyProlific.

What: Placing his plaintive raps over gentle melodies, Indii G writes songs about new love and growing apart. His January 2022 single “Hampton,” however, suggests that a stylistic evolution is underway as his usual lo-fi sound gets a sleek touch-up with lush orchestral instrumentation.

What’s next: TBA, but they recently dropped the single “Hampton.”

Who: Get ready to hear more from Joyce Wrice, the Southern California breakout singer and songwriter who will be singing the new Proud Family theme song, premiering Feb. 23.

What: Wrice’s honey-smooth voice goes perfect against the throwback pop-R&B sound that saturates her 2021 debut album, Overgrown. Songs like opener “Chandler” and “Losing” could’ve been in radio rotation in the ‘00s and is full of vocal runs and sky-high falsettos from Wrice.

What’s next: Catch Wrice on tour with Lucky Daye this spring 2022.

Who: Brooklyn-via-Charlotte non-binary rapper Ivy Sole has been releasing their clear-eyed raps since 2016, and recently dropped off a new album, Candid.

What: Across Candid’s 13 tracks, Sole raps about family, legacy, violence, anxiety, and community in a three-arc narrative that recounts their parent’s love story and its effect on Sole’s life. Throughout, Sole’s distinct identity as a rapper emerges: deft, writerly verses and straightforward delivery that they sometimes wrap in cheeky cultural references like on “Call Me,” which begins with a Lil Wayne “Lollipop” interpolation.

What’s next: Sole’s latest album, Candid, is out now.

Who: Lagos-based rapper and model Deto Black is the latest artist to emerge from Nigeria’s buzzy alté scene. She made her musical introduction in 2020 by opening alté star Odunsi (The Engine)’s track “body count” with Amaarae and Gigi Atlantis.

What: Since, Black has solidified her own playful and glamorous sound with her catchy 2021 single “Brag,” a brash, attitude-filled bop about being “too fly I don’t even need to try.” Her 2021 EP, Yung Everything, built upon that flashy foundation with videogame bleep-bloops and experimentation into more melodic flows.