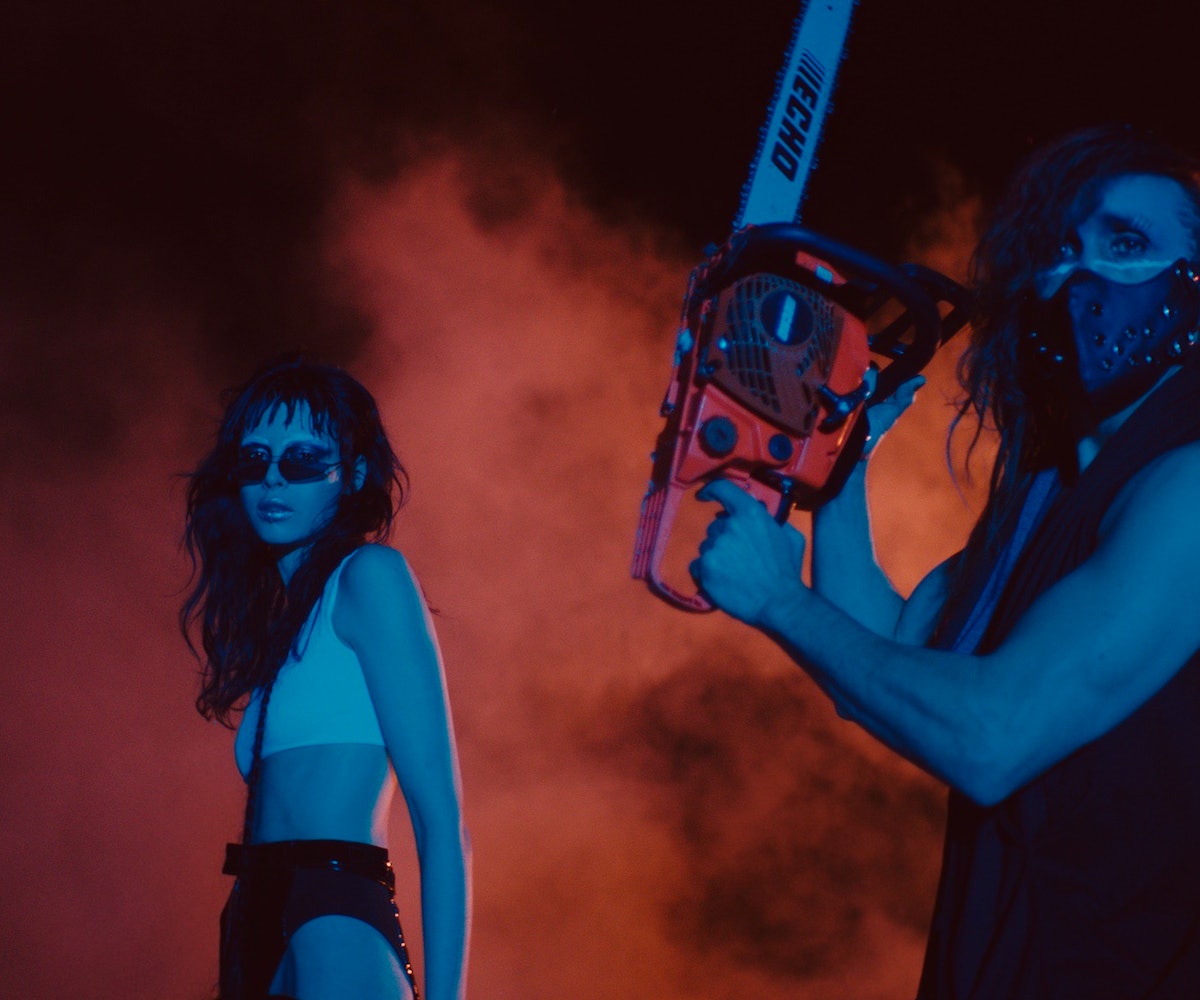 Uni, the New York-based psychedelic rock trio of bassist Charlotte Kemp Muhl, vocalist Jack James, and guitarist David Strange, is ready to debut their first song of 2020. Titled "Debris," on the track, the band ditches the fuzzy guitar and thrashing drums of their past songs for piano and an ornate entourage of strings; It's got all the landmarks of an apocalyptic blockbuster soundtrack, which probably explains the track's impressive accompanying video: a Mad Max: Fury Road and Stranger Things mash-up, complete with face prosthetics and eerie middle America wandering.

In the visual, a hawk is on fire, a wall of TVs replay John F Kennedy's assassination, and Kemp Muhl, James and Strange traverse the icy grounds of a Midwest clearing. The allegories feel endless, but over email Kemp Muhl offers a more quotidian backstory to the song: "It's something I wrote during a break up, using the end of the world as a metaphor for the tectonic collisions and molten debris of a war torn relationship, or something cheery like that." Of course, if you're more partial to art that's more opaque, there's also their cryptic and vivid secondary explanation, a Cold War-era short story in poem-like form, printed below.

Watch "Debris," and read on to hear how Uni's been spending time in quarantine (apparently, in cryogenic chambers).

Spiritualized men in cornflower blue suits and awkward toupees grin mawkishly on the disintegrating flutter of VHS. Radio waves lapping across the gulf of space are funneled like a reverse exorcism into the motel room's coin-operated television set. There’s a lullaby of some cold-war soviet medium intoning doomsday into a whirring cassette recorder.

You can almost smell the puke and tears in the brown carpet.

See the sheen of indifference in the lichen-like wallpaper as it perspires, reflecting the taillights of trucks cometing past on the highway - out through the nicotine stained curtains - like electric phantoms cutting across the night.

You stare through the mildewed muslin like an undead Edie come back to haunt Grey Gardens.

Out beyond the highway is a sea of sucking mud at the bottom of a darkland of swamps that stretches out behind the shuttered Denny's and into the blackness of forever -- where another group of teenagers has just now disappeared with flashlights, flyrods and powder. They won't come back.

Watch and watch until it's the box that's watching you.

Fall asleep as the emergency broadcast chimes and the station drops to the static of a nuclear missile warning.

Down you go into your last dream.

Then the voices begin. Whispering, whispering... Pulling you through doors to other manifolds of space time... You are not alone. You were never alone.

What are you all up to in quarantine?

James: Currently I’m riding out the quarantine in a cryogenic chamber until the bars reopen; it’s a little cold for a reptilian humanoid like myself but the temperature keeps me looking youthful. I believe the programmers of my cell mentioned Kemp is developing mutant cyborg pig-barians (pig barbarians) for the Martian Coliseum Battles; if you haven’t heard of that, look it up. They also mentioned that David has been swashbuckling on a Viking Langskip ; drinking rum and cokes with Chunk from The Goonies and practicing his roller skating. He actually has no idea the world is in a pandemic. Needless to say, the quarantine hasn’t been too out of the ordinary for UNI.

How did "Debris" come about?

Kemp Muhl: It’s something I wrote during a break up, using the end of the world as a metaphor for the tectonic collisions and molten debris of a war torn relationship, or something cheery like that. But the song has evolved a lot production wise. It’s a chimerical hybrid of an old tape recording from East West studios in LA, with me and David tracking live as a band. He played a kind of Jimi Hendrix guitar part, then later I fused it with 808 samples and a mini orchestra. It was very difficult for me to edit because nothing was on a grid, but I wanted it to feel more like classical music than pop. Jack added a lot of melodic inflection and emotion to it, despite it being in the range for Castrati.

In your quote about the song, you guys describe a scene of Cold War-era middle America on the brink of nuclear war. What is behind the fascination with that time period?

Kemp Muhl: We have entered an age where religious ideologies and nuclear technology coexist. This alone is a terrifying concept, plus the fact that humanity is like Icarus, flirting with how close we can get to the sun of technology before our wax wings melt. I like the connection with televisions and evangelists in that quote by Cae (our newest band member) — because our video is about a cult. A post apocalyptic cult that worship radio activity and live by the motto “Mutate Or Die”. In the end of the video you see Jack bio-hacking and injecting some mysterious serum into himself which will either transmogrify him into a Demigod or kill him. It’s left open ended...

What are some things — art or otherwise— that have been giving you guys hope these days?

James: Sugar cereal, Tennessee Williams/Trent Reznor fan fiction (surprisingly hot), and brushing up on Hildegard of Bingen’s second volume of visionary theology: Liber Vitae Meritorum; it’s a riot! In all seriousness, hope seems almost foolish right now; the world feels scary, dark, and unknown - it’s a feeling similar to being really homesick, but more devastating. That being said, I still feel hopeful. This is because of the courage and compassion I’ve witnessed from human-kind in this time. Sure, there are so many things to learn about empathy, privilege and tribalism. However, it is the willingness to learn and evolve that inspires me to believe we’ll come out the other side of The Second American Revolution- shifting the pendulum from a society based in fear to a society based in love. Fingers crossed, right?