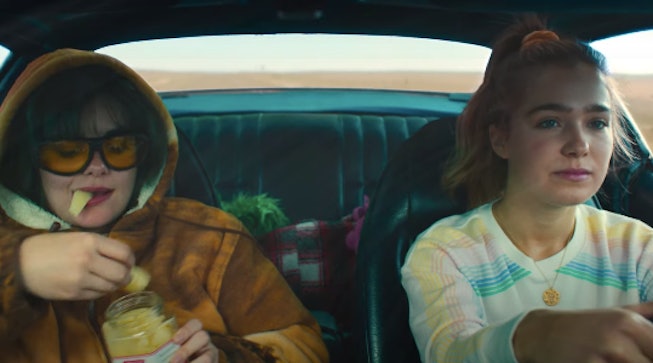 Unpregnant, HBOMax's forthcoming feature, is a road trip comedy with a very American premise — two teenagers driving across state lines in order to secure an underage abortion. Starring buzzy actresses Hayley Lu Richardson and Euphoria's very own Barbie Ferreira, the film follows Richardson’s Veronica, a Missouri goody-two-shoes type who gets pregnant and has to beg her former best friend and mild outcast Bailey to accompany her to the nearest abortion clinic, a cool 14-hour drive away.

The film seems sweet and ultimately lighthearted, albeit with a light veneer of cringe; after all, the tagline is "She's a Type A Without A Plan B," which borders on parodic. Aughts power pop group Sleigh Bells' "Rill Rill" also loops throughout the heartwarming trailer, a song which at this point in time feels straight up vintage.

The highlight of Unpregnant sits with Richardson and Ferreira's clear on-screen chemistry. You simply can't have a buddy comedy without it! It's also a favorite aspect of the film's director, Rachel Lee Goldenberg. “Haley and Barbie are just magic together," she said to IndieWire. "And the response of people who have seen it so far has been incredible and it feels timely. I’m thrilled to be getting that one out in the world.”

Richardson will be adding Unpregnant to her roster of coming-of-age films, including 2016's The Edge of Seventeen and 2017's indie drama Columbus. As for Ferreira, it's her big jump from television to film. "My very first movie w a true angel [Hayley]! Get ready for tears and laughs and all the good stuff in between," the actress wrote on Instagram.

Watch the trailer below and stream Unpregnant on September 10.