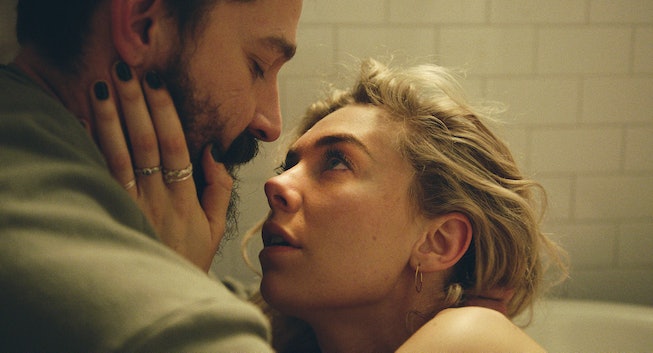 All Martha wanted was a peaceful home birth. "I wanted to stay home," she says in the first trailer for Pieces of a Woman, which was released this morning. "I wanted the baby to decide when she wanted to come." But things don't always go according to plan. And in Pieces of a Woman, which stars Vanessa Kirby (The Crown's own Princess Margaret) in the leading role, things quickly go very awry. Despite her simple wishes, Martha's home birth, which stretches across a full half-hour in the film, is anything but peaceful.

Directed by Kornél Mundruczó, written by Kata Wéber, and executive produced by Oscar winner Martin Scorsese, Pieces of a Woman follows Martha as she reels from the aftermath of her disastrous childbirth, responding to the devastating incident in ways neither her partner, mother, sister, nor friends can understand.

In addition to Kirby, the film also stars Shia LaBeouf as her supportive but sometimes volatile partner Sean, Oscar winner Ellen Burstyn as her stern mother Elizabeth, Instant Family's Iliza Shlesinger as her more successful sister Anita, Uncut Gems director Benny Safdie as her sister's husband Chris, Deadwood's Molly Parker as the midwife who finds herself in the middle of a heated legal battle Eva, and Succession's Sarah Snook as the lawyer Martha's family hires in their lawsuit. (Yes, I still think Snook deserved the Emmy.)

Since premiering at the Venice International Film Festival in September, where it took home a Best Actress award for Vanessa Kirby and the Arca CinemaGiovani Award for Best Film, Pieces of a Woman has been a huge awards contender – which is undoubtedly part of the reason why Netflix was so quick to scoop up the international distribution rights. While the current 2021 Oscar slate for Best Actress is already appropriately stacked (led by Nomadland's Frances McDormand, and also including Ma Rainey's Black Bottom's Viola Davis, The Life Ahead's Sophia Loren, and Ammonite's Kate Winslet), many have also understandably slotted Kirby's electrifying performance in as a very probable contender. Needless to say, it's one you don't want to miss.

Pieces of a Woman hits select theaters on December 30th, followed by an official Netflix premiere on January 7, 2021.