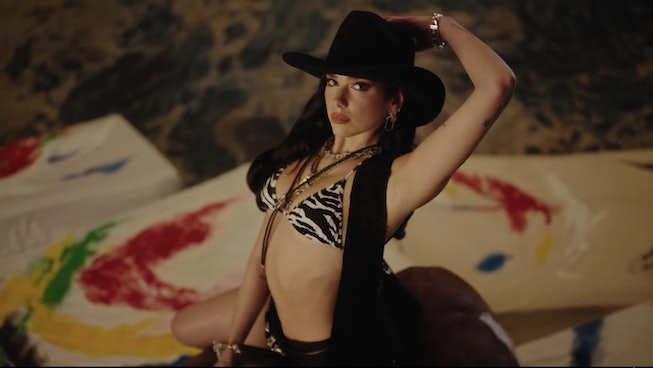 Does Dua Lipa ever get tired? It’s been over a year since the pop star released her critically acclaimed take on forward-thinking disco, Future Nostalgia, and the pop star is still rolling out its singles — not that we’re complaining.

Miss Lipa’s latest release is the music video for mid-album love song “Love Again,” which sounds like a Western movie’s take on the feverish emotion. Its music video fits that bill with Lipa dressed up in a cow-print bikini and black cowboy hat to ride a mechanical bull. She and her back-up dancers are posted up in an eerie and otherwise completely empty hotel that sorta gives off The Shining vibes, if their slow decent into insanity is putting on clown makeup to also hoedown in the building’s empty ballroom.

In a tweet, Lipa revealed that she shot the video in between rehearsals for her performance at the BRIT Awards earlier this May, at which she performed a Future Nostalgia medley set in London’s underground Metro system. “Learnt the choreo in 45 mins, kept adding outfits mid shoot but we did the damn thaaaang!!” she wrote.

Lipa’s fans on social media have pointed out the video’s similarities with another iconic cowboy-themed music video from none other than Madonna herself; in her video for “Don’t Tell Me,” Madonna also throws down with a crew of leather-wearing cowboys. While it’s clear the two videos simply play on the same Western theme, Lipa’s visual does follow a long lineage of cowboy-themed pop visuals — Solange’s A Seat At The Table comes to mind, ditto Halsey’s “You Should Be Sad” — which makes us think we’re in for another resurgence of Western aesthetics this summer.

“Love Again” is Lipa’s sixth single from Future Nostalgia. She described its creation in an episode of Netflix’s Song Exploder series, and has mentioned that the track is her favorite off the album. At the 2021 Grammys the star took home Best Pop Vocal Album for the project, her second Grammy award.

The video for “Love Again” was directed by Nabil Elderkin, whose upcoming debut feature film Gully also includes original music from Lipa; her song, “Can They Hear Us,” is also out now.

Watch the video for “Love Again” above.

NEXT UP
Entertainment
Björk's Music Video Evolution, From Fresh-Faced Star To Avant-Garde Master
Entertainment
Paramore's "This Is Why" & 9 Other New Songs Out This Week
Entertainment
Lizzo Announced UK & European Dates For The Special Tour
Entertainment
Arctic Monkeys Announced A Huge 2023 North American Tour