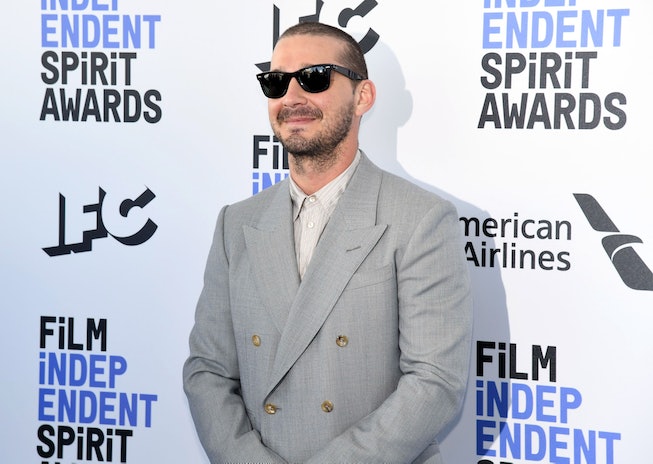 The gift that keeps on giving on the internet right now is the Fast Times At Ridgemont High table read. John Legend, Julia Roberts, Jimmy Kimmel, Matthew McConaughey, Morgan Freeman, Ray Liotta, Henry Golding, Sean Penn, Dane Cook, and Shia LaBeouf all hopped on Zoom for a virtual table read of the 1982 film, with LaBeouf logging on from the front seat of his truck and winning America's heart.

In one viral clip from the livestream, LaBeouf is seen smoking an undetermined substance in the truck while Morgan Freeman speaks, exhaling through strained laughter before the video cuts to a gleeful John Legend. LaBeouf is a serious actor who deserves all of our respect.

"Hi Brad. You know how cute I always thought you were," Aniston read with a professionalism I could only dream of. "I think you're so sexy. Would you come to me?"

Pitt, who at that point had no lines to say, smiled and giggled, which is honestly fair.

Check out LaBeouf, Pitt, and Aniston's clips from the Fast Times At Ridgemont High table read, below.

NEXT UP
Life
Paul Mescal Is A Single Dad In Emotional Aftersun Trailer
Life
A Studio Ghibli-Inspired Cookbook Is Coming To A Kitchen Near You
Life
Julia Fox Calls Ye “The Most Lit Rebound Ever”
Entertainment
Lindsay Lohan Teases Her Return To Film, 'Falling For Christmas'