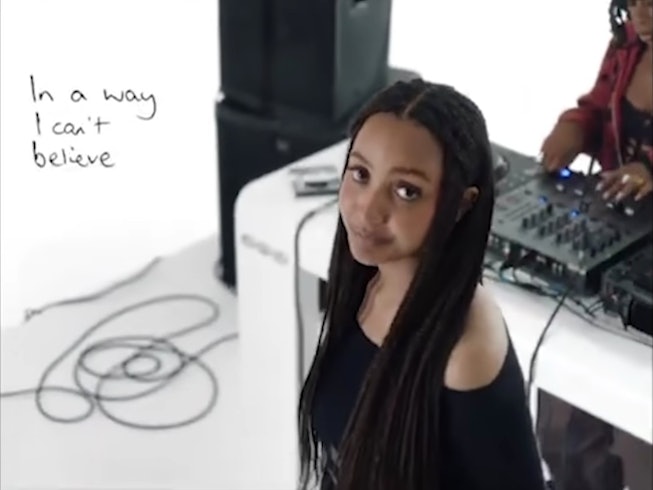 Not much comes up when you Google PinkPantheress. The viral musician is 20, was born in Bath, England, and records many of her hypnotic, nostalgic songs at 3 a.m. in her university dorm bedroom — but beyond that there’s not much else. She doesn’t have a Twitter and her Instagram account is sparse, with only six photos, two of them of her face.

The elusiveness is an intentional choice by the young singer and songwriter, who keeps her real name private and who’s already been dubbed as “mysterious” by a handful of publications. She also happens to be one of the biggest breakout viral stars of 2021 — and one of the few who have emerged from TikTok that seem to have the potential to go beyond it.

Since her early 2021 song “Break It Off” took off on the platform, hearing her delicate singing voice is never but a few scrolls away. It seems like every one of her subsequent singles, “Passion” and now the wistful, garage-pop song “Just For Me,” have also gone viral. And it’s spilling off the app too. On Twitter, a clip from the moody “Just For Me” music video made the rounds as people pointed out how much it reminded them of MTV’s golden age in the early aughts. “Genuinely made me believe this song is from 2005 lmao,” wrote one tweet.

At such a critical time in her career, it may feel like PinkPantheress should be giving more of herself to the outside world, rather than closing her blinds. Unlike her viral TikTok predecessors, PinkPantheress has avoided making an immediate beeline to the press. A rare interview she has with magazine I-D is sparse and pretty reserved in terms of giving away too much personal information. When asked what she was “afraid” of the public knowing about her, she responded that she’s “not necessarily afraid,” but that she’s “avoiding stress and preconceptions.”

And, good for her. In an age where TikTok’s most famous exports, Charli and Dixie D’amelio, have a reality show that’s basically a PSA of how horrible viral life is, you can’t blame her for trying to avoid as much of the damaging side-effects of the phenomenon as possible. She’s not mysterious, she’s just realistic.

If anything the past few weeks’ news cycle (see: John Mulaney) has exemplified the weird ickiness that comes with any sort of — and I hate to use this word — parasocial fan-celebrity relationship, and we can only commend her for nipping that problem right in the bud before it even has the chance to begin.

Listening to PinkPantheress’ music feels like being on the internet before social media was a thing and that aspect only makes her hesitation make more sense. Her songs often merge old, nu-garage samples with pop melodies, a collage of sounds that fell simultaneously dated and contemporary — an emulation of what it’s like growing up with the internet maybe.

Either way, it doesn’t seem like her reservedness has impacted her momentum as she seems poised to transcend the online world too.

The other day I walked past a group of teens on the side of the street huddled around a single iPhone that was blasting the opening notes of “Just For Me” at 10 p.m. The guy holding the phone said, “I can’t stop listening to this.”