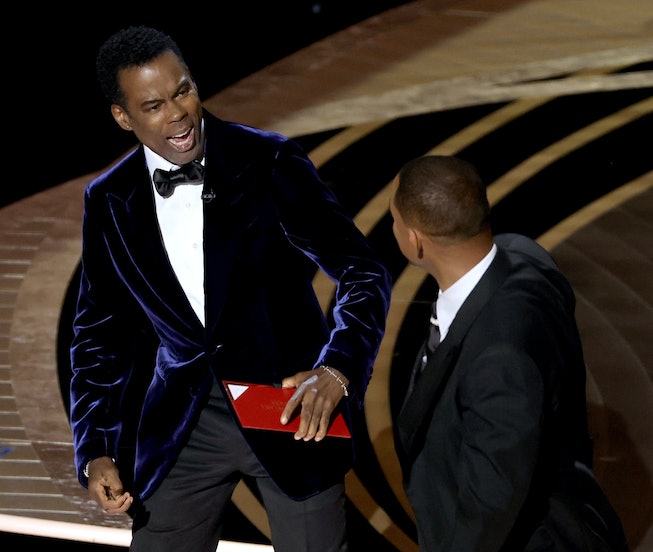 Will Smith has been banned from attending the Oscars ceremony for the next 10 years, the Film Academy announced in an open letter to the Academy on Friday following a meeting by the organization’s group of governors.

As reported by The Hollywood Reporter, the Film Academy’s board finally met on Friday morning to discuss what actions they’d take against Smith, who slapped presenter Chris Rock and shouted profanities at him during the 2022 Oscars ceremony. In the days following the incident, the Academy released a statement strongly condemning Smith’s actions, and Smith himself issued a formal apology to Rock and has since resigned from the Academy.

Despite that, though, the Academy still brought the hammer down on Smith, banning the actor from “any Academy events or programs, in person or virtually, including but not limited to the Academy Awards,” the open letter stated.

In the letter, the Academy also issued an apology for their own handling of the situation during the live ceremony, including allowing Smith to stay for the rest of the show. “During our telecast, we did not adequately address the situation in the room,” the letter added. “For this, we are sorry. This was an opportunity for us to set an example for our guests, viewers and our Academy family around the world, and we fell short — unprepared for the unprecedented.”

Finally, the letter thanked Rock for “maintaining his composure under extraordinary circumstances.” Read the Academy’s open letter in full on The Hollywood Reporter.

Will Smith has formally apologized to Chris Rock for slapping him onstage at the Oscars on Sunday night, after Rock made a joke about Smith’s wife, Jada Pinkett Smith.

“Jokes at my expense are a part of the job, but a joke about Jada’s medical condition was too much for me to bear and I react emotionally,” Smith wrote in an Instagram statement.

“Violence in all of its forms is poisonous and destructive. My behavior at last night’s Academy Awards was unacceptable and inexcusable. Jokes at my expense are a part of the job, but a joke about Jada’s medical condition was too much for me to bear and I reacted emotionally. I would like to publicly apologize to you, Chris. I was out of line and I was wrong. I am embarrassed and my actions were not indicative of the man I want to be. There is no place for violence in a world of love and kindness.

The Academy of Motion Pictures Arts and Sciences condemned Will Smith’s actions at 2022 Oscars. The film academy is reportedly launching an official inquiry into his slapping of Chris Rock during the ceremony, after Rock made a joke about Smith’s wife, Jada.

In a statement Monday, the academy said: “The Academy condemns the actions of Mr. Smith at last night’s show. We have officially started a formal review around the incident and will explore further action and consequences in accordance with our bylaws, standards of conduct and California law.”

During his speech for Best Actor, which Smith won less than an hour after slapping Rock, Smith apologized to the academy for his actions (but not to Rock), saying he wants to be a “vessel for love.”

After the show, the academy posted a statement condemning violence, and the LAPD said on Sunday that it was aware of the incident but not pursuing an investigation, because Rock declined to file a police report.

The slap quickly became the biggest moment of the night and one of the most unexpected in Oscars history.

The Oscars took a truly chaotic turn this evening when Chris Rock took to the stage to present the award for Best Documentary Feature. The comedian was making jokes about several audience members, and made a crack about Jada Pinkett Smith’s buzzcut making her resemble GI Jane.

Smith apparently did not find the joke funny, and sprinted up to the stage, slapping Rock across the face. The audience went quiet as a visibly shocked Rock stared at Smith in disbelief. Smith then returned to his seat, and shouted out, “Keep my wife’s name out your f*cking mouth.”

Rock went onto present the award to Questlove for Summer of Soul, before the broadcast cut to commercial. Smith’s publicist was apparently seen talking to the actor and his wife during the break.

Pinkett Smith has spoken publicly about her battle with the autoimmune disorder alopecia, which can cause hair loss and balding. Last summer, she revealed that she decided to shave her head and embrace it.

Later, when he accepted the award for Best Actor for King Richard, about Venus and Serena Williams’ father, Smith said, “Richard Williams was a fierce defender of his family,” referencing what had just happened.

“I’m being called on in my life, to love people and to protect people. And to be a river to my people,” he said through tears. “I know to do what we do, you have to be able to take abuse, to have people talk crazy about you. In this business you have to have people disrespecting you and you have to smile and pretend like that’s okay. Denzel [Washington] said to me a few minutes ago, he said, ‘At your highest moment be careful, that’s when the devil comes for you.’”

He continued, “Art imitates life, I look like the crazy father, just like they said about Richard Williams. Love will make you do crazy things.”

Smith’s son Jaden seemed to support his father, writing on Twitter, “And That’s How We Do It.”