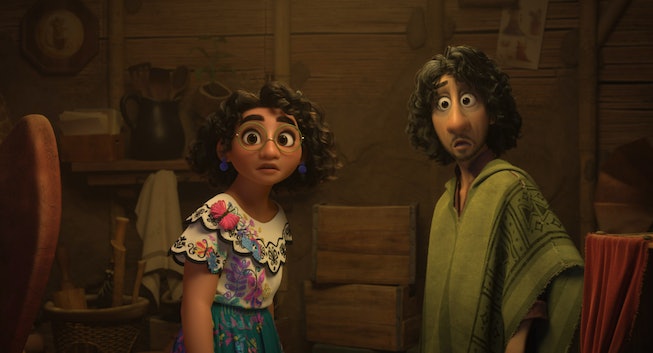 Once in a blue moon, there comes a Disney song that becomes so big and culturally ubiquitous that a layman could identify it even without even seeing the movie. Frozen’s “Let It Go” was one of those; more recently, that title could be extended to Moana’s “How Far I’ll Go.” Now, there’s a new song blowing both of those out of the water, vying to be the latest inductee in this elite pantheon of Disney anthems: Encanto’s “We Don’t Talk About Bruno,” which just surpassed Frozen’s “Let It Go” as the highest-charting Disney song in 26 years.

Maybe you’ve heard it once or twice while at the grocery store or, more likely, swiping through your TikTok’s FYP (more on that later). The song — a Latin-influenced bop which serves as the introduction to the film’s central villain, Bruno, and features verses from multiple characters in the film — could feel like an unlikely hit, considering Disney’s past hits have largely been sung by a single vocalist. Despite (or, perhaps, in spite of) all of that, “We Don’t Talk About Bruno” and Encanto’s wider soundtrack have veritably taken off in the months since the movie debuted in theaters in December 2021. The soundtrack peaked at No. 1 on Billboard’s Hot 200, and it seems like it’ll only be a matter of time before “We Don’t Talk About Bruno” takes that same slot on the Hot 100.

So how — and why — did “We Don’t Talk About Bruno” and Encanto become so popular? Like every massive song in the streaming age, it’s a mix of a TikTok virality, hyper-relatability, and, unfortunately for the Lin Manuel Miranda disbelievers, genuinely good song crafting.

Encanto caters to an international audience

If you haven’t yet seen the movie, Encanto tells the story of the family Madrigal, a magical family blessed with special “gifts,” or abilities, living in an enchanted corner of rural Colombia. One of its members, and the sole un-magical Madrigal, Mirabel, discovers one day that the source of her family’s magic has become threatened by an unknown force. Her journey to uncover the reason why becomes the film’s central conflict.

Given its non-U.S. centric plot and characters, it’s not hard to understand how Encanto has become not just a U.S. but global phenomenon. In recent years, with the release of Moana, Soul, and Coco, to name a few — Disney has been obviously trying to widen its audience by telling more diverse stories, and Encanto is perhaps one of their best and most faithful attempts. The film’s entire cast is made up of Latin American actors and, not only that, Disney is also putting in the work to make the film more accessible to those beyond its intended audience, as its central themes of family, belonging, and ostracization are, after all, universal.

Per the Wall Street Journal, Encanto and its soundtrack have already been translated into 40+ languages including Japanese and German, with the songs even getting small lyrical tweaks to better fit the contexts of other cultures and countries. Despite that, the influence of Latin American folk and dance music — including guajira, a specific style of Cuban folk music — remains at the forefront of its songs, making the film and its soundtrack a cohesive package that’s stylistic, with lyrics that are universally relatable.

Whether you like Lin Manuel Miranda or not, it’s time to face the facts: the man knows how to write a musical soundtrack. And the proof is in the pudding: At press time, “We Don’t Talk About Bruno” has reached No. 6 on Billboard’s Hot 100, while Encanto’s Original Soundtrack is back at No. 1 on the Billboard 200 for its second non-consecutive week.

Online, TikTok has also been a huge force in bringing attention to the film’s soundtrack. “We Don’t Talk About Bruno” has soundtracked over 300K videos and is currently one of the app’s most popular sounds (and that’s not including the soundtrack’s other songs whose video counts average in tens of thousands). The song has been used over everything from Minecraft building videos, nail art tutorials, cosplay videos, and dance videos — but most of all, it’s clear that the song’s clever structure of having its verses sung from the perspective of different characters is a key factor to the song’s success.

TikTok user N’sara Reigns, who makes Encanto-related videos in which she cosplays as Dolores Madrigal (cousin to Mirabel), says that the song’s catchy beat and musical transitions is what drew her into the track. “Simply put, ‘We Don’t Talk About Bruno’ is an earworm,” she tells NYLON. “I'm pretty sure I listened to the song for a month straight, I'm talking nearly every day, because I'd become hooked onto a different verse of the song each week.”

For many users, it’s an opportunity to put their acting skills — and styling skills — on full display as they get to show off their own riff on the film’s different personalities.

Encanto is representation rooted in reality

Another major factor of Encanto’s appeal is its vivid representation of Colombian and Latin American culture, customs, and family dynamics. Scour through TikTok and you’ll see numerous videos from creators remarking about “seeing [their] family” in the movie — from Afro-Latino characters to characters with different body sizes, shapes, and more.

“The fact the movie is centered around Hispanic and Latinx people alone was already a pretty big deal in terms of representation,” Reigns tells NYLON. “The creator's decision to take multiple ethnic groups in Colombia and add them to one family increased that tenfold. So many people finally got the chance to look at a character and see themselves, their friends, and family members looking back.”

Reigns adds that the film also shows Colombian and wider Latin culture in an “if you know, you know” sort of way, pointing to little details like Dolores Madrigal’s squeak when she hears gossip or Mirabel using her lips to point at objects as examples.

“The only people who got those things while watching Encanto were people exposed to or a part of Colombian culture as well as those with cultural similarities,” Reigns says. Those seemingly insignificant details make the movie “all the more special to people who know.”

While Encanto does have supernatural elements, it’s still largely rooted in real traditions, customs, and people rather than in a fictional universe like in Soul, which is largely set in a different realm altogether.

So, who is Bruno?

The question of the year — or at least the last few months! In short, Bruno Madrigal is the disgraced son and uncle of the Madrigal family and has the special ability to see the future. Like every fictional character who’s ever existed that’s been blessed (cursed?) with the power to peer into the future — Bruno plays a central role in the film’s main conflict, but we won’t spoil more than that. You’ll simply have to dive into the world of Encanto and, as Reigns says, experience the “undeniable charm that can only be understood by watching the film.”

Encanto is available to stream now via Disney+.