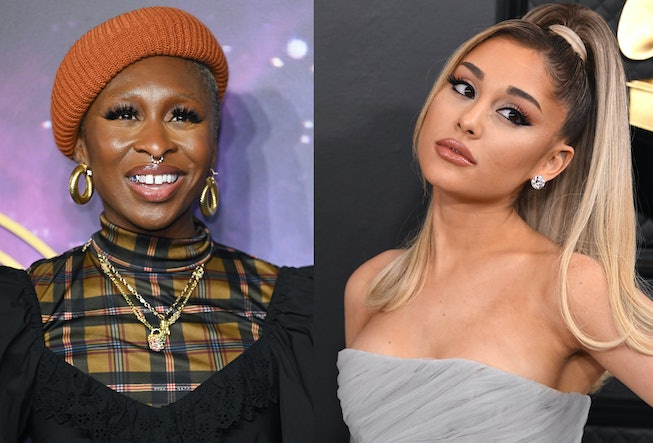 Ariana Grande and Cynthia Erivo have been cast as Glinda and Elphaba in Jon M. Chu’s film adaptation of Wicked.

The two leads were announced on Instagram, with Chu posting screenshots of his leading ladies the moments they learned on Zoom that they’d be playing the roles. “Thank goodness,” Grande captioned her own photo of the moment. Erivo, who is an Oscar away from being a rare EGOT-winner, shared her excitement with a series of screenshots, too.

“Dear Cynthia, honored doesn’t even begin to cover it. I cannot wait to hug you. See you in Oz,” Grande wrote in a message to Erivo along with pink and green flowers (the signature colors of Glinda and Elphaba). “Pink goes good with green,” Erivo captioned the photo.

In The Heights director Chu has been attached to Wicked since February, and rumors about who would take on the two lead roles have been swirling ever since. The Broadway musical is a prequel to The Wizard of Oz, with Wicked telling the story of everything that happened before Dorothy’s arrival in Oz. In its original Broadway run, Idina Menzel and Kristin Chenoweth played Elphaba (the Wicked Witch of the West) and Glinda the Good Witch, respectively.

Both Grande and Erivo have roots on Broadway. Grande first starred as Charlotte in 13 on Broadway when she was just 15, and Erivo made her Broadway debut as Celie in The Color Purple in 2015, winning a Tony, Grammy, and daytime Emmy for her performance. Grande also sang “The Wizard And I” for NBC’s A Very Wicked Halloween: Celebrating 15 Years on Broadway in 2018.

Grande told Seth McFarlane in a past episode of Carpool Karaoke: The Series that should she be ever cast in her dream role of Glinda, “I would do it tomorrow, I’d cancel my whole sh*t.”

Several names from the original show are involved in the film adaptation; Stephen Schwartz, who wrote the music and lyrics for the Broadway show, is adapting the screenplay with Winnie Holzman, and Marc Platt, who produced the Broadway musical, will also produce the film.

There is no release date yet for Wicked.