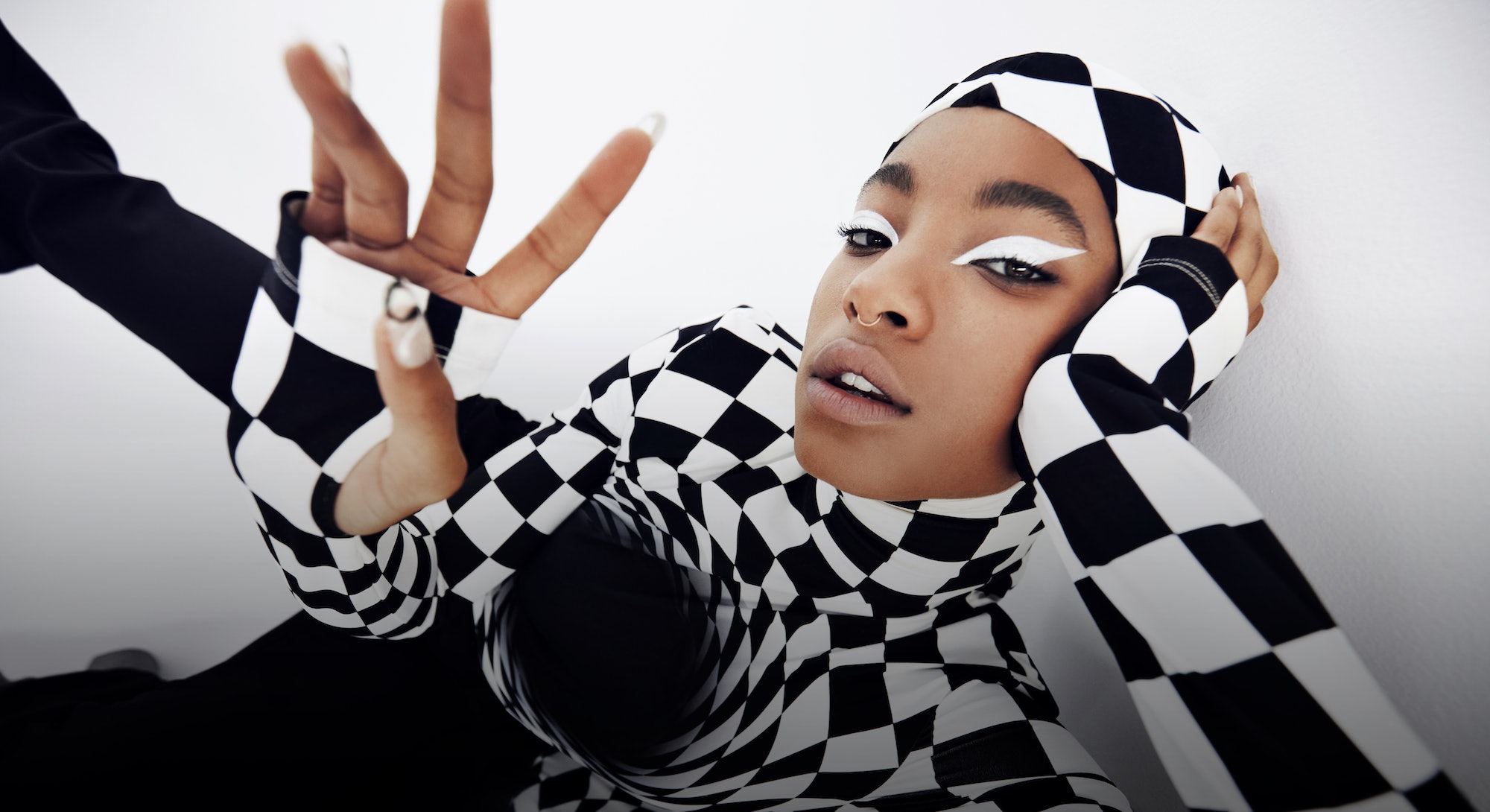 When Avril Lavigne burst onto the Billboard charts in 2002 with “Sk8er Boi,” an instant-classic pop-punk anthem about an outcast who makes it big, Willow Smith was 2 years old. It wasn’t until she was 7 or 8 — a lifetime later, in Willow years — that the daughter of Will Smith and Jada Pinkett Smith discovered Lavigne’s music. At that point, Smith was a working professional in Hollywood, having starred alongside her dad in I Am Legend, and was a year away from releasing her first single, “Whip My Hair.” She was soaking up her influences, and Lavigne was at the top of the list. “I was listening to her 24/7 and trying to dress like her and trying to just be her, honestly,” says Smith, now 20.

Last month, Smith got her wish. She was photographed filming a music video with Lavigne in Los Angeles, both wearing aughts-perfect plaid pants and spiky, studded chokers. An eyewitness told People that they even high-fived at the end of the shoot. It was, says Smith, a “fever dream.”

How did this happen? Smith, who has the easy confidence of someone who has been working in the music industry for over a decade, says the whole process was pretty straightforward. Stuck in quarantine last year, she started toying with the idea of making a pop-punk album reminiscent of the music that was on the radio when she was a kid. She DM’d Lavigne about collaborating on a song, and Lavigne was like, “Sure!” And then she reached out to Blink-182 drummer Travis Barker, who said he would love to collaborate on “Transparent Soul,” the first, growling single off of Smith’s now-completed album Lately I Feel Everything. (Smith will release Lately, as well as a performance of the album on Watch Together on Instagram, Messenger, and Facebook, July 16.)

When Barker said he was interested, “I was like, ‘Yo, I'm shitting my pants,’” Smith says. “Like, this is crazy. How is this even possible?” In Smith’s world, pretty much anything is possible, but she seems to have avoided becoming jaded. “Just infinite gratitude to both of them,” she adds, “because they're honestly pop-punk royalty.”

With Lavigne and Barker’s seal of approval, Smith’s new sound arrives in the midst of a pop-punk revival buttressed by acts like Machine Gun Kelly (who also collaborates with Barker) and Mod Sun (who dates and collaborates with Lavigne). Gen-Z kids posing on Instagram look like they’re about to go to the Warped tour, and girl-of-the-moment Olivia Rodrigo is referencing Paramore and Courtney Love on her breakout album Sour. TikTok has decided that Lavigne is cool again — her first post, set to “Sk8er Boi” and co-starring Tony Hawk, has been viewed over 29 million times.

“People want to scream and growl and express themselves because this time in life and in America and on Earth is not easy, and it's very, very chaotic and sus.”

Smith attributes pop-punk’s cultural reemergence to, well, I’ll let her explain: “I think that there are a lot of things happening socially and politically, and I think that people just want to scream and growl and express themselves because this time in life and in America and on Earth is not easy, and it's very, very chaotic and sus,” she says. “I think that people just want to live and have fun and not feel like impending doom is always around the corner.”

In the typically self-reflective, philosophical Smith, this new era has brought out an uncomplicated youthful exuberance. Everything about the writing, recording, and collaborating on the new album has been, in her words, fire. The bassist in her rehearsal band? Fire. Getting to make a music video with Lavigne? Also fire. The moment Barker got in the recording studio with her? “I was like, ‘Yo, that's fire,’” she says.

The song she recorded with Lavigne is called “Grow,” and it’s a tight two minutes of pure pop-punk that sounds like it would be at home on a Lavigne album from 2005. But the lyrics are imbued with some of Smith’s trademark spirituality. “We’ve both been through a lot in our musical careers, and we've had to do a lot of growing and a lot of evolving,” Smith explains. “And I just wanted to put a testament to that. … The lyrics of pop-punk songs that sound like that aren't usually that insightful, so I wanted to mix my two worlds — like, this super philosophical and spiritual world with this, like, angsty world. I think we did a pretty good job on that.”

Meeting Lavigne on the set of the music video was “super vibey, super chill,” says Smith. In an email punctuated by self-censored f-bombs and LOLs, Lavigne writes that she was “really touched” to learn that Smith was a fan. “The genre always gives a voice to the kids who were told to shut up their whole life, and I am not surprised there is a revival,” she says. “I’m actually super f’in excited!”

Lavigne, 36, did not offer Smith any particular performance advice on set, but she did bestow upon her young protege an electrolyte mix. “What can I say?” asks Smith. “She's Avril Lavigne. She's fire.”

“I look at her and I go, maybe there is such a thing as galactic creatures that are from outer space, just in human skin,” Jada Pinkett Smith says.

The experience of filming the video for “Transparent Soul,” featuring Barker, was slightly more hardcore. The set was a dingy club venue, and in the opening scene, Smith, wearing an oversized leather jacket emblazoned with a clown-faced bunny on the back, snags a joint from a guy in the crowd. “I love weed,” Smith explains, matter of factly. “I make it a habit to not smoke in the studio for periods of time, because that’s just good for you. But yeah, like, I love weed. What can I say? It’s a beautiful plant. It can help with a lot of things. If you use it the wrong way, it can really fuck you up — it’s really just everything with maturity and moderation.”

Smith’s kid-in-a-candy-store outlook can make it easy to forget how long her resume is. After Jay-Z signed her to Roc Nation at age 9, “Whip My Hair” went platinum, cementing her reputation as a prodigy born of Hollywood royalty. In her teen years, she released four albums (mostly R&B), lent her voice to shows like Neo Yokio and Adventure Time, and landed campaigns with Chanel, Onitsuka Tiger, and Mugler. She won a Daytime Emmy this year alongside her mom and her grandmother Adrienne Banfield-Norris (better known as Gammy) for Red Table Talk, the talk show on which she serves as the introspective voice of Gen Z, tackling a range of personal topics from her history of self-harm to her more recent embrace of polyamory. “I'm a broken record, but gratitude is the only emotion that I can allow myself to feel at this point because, goddamn, this is crazy,” says Smith of the win. “What can I say?”

Still, it’s obvious that starting her professional life as a child came with its own set of challenges. At 14, she revealed to T that she only ever went to traditional school for one year, and that the experience helped her understand “why kids are so depressed.” She recently told L’Officiel that she spent years hating and regretting “Whip My Hair,” and her father has said she refused to perform and shaved her head in protest.

On a call from Smith’s band rehearsal, Pinkett Smith says that her daughter was always self-determined with a rebellious streak, something she stopped trying to parent away when Smith was 8 or 9. “My biggest thing that I'm always telling Willow is to trust her instincts,” she says. “Since she was a little girl, her instinct has been on point.”

“I look at her and I go, maybe there is such a thing as galactic creatures that are from outer space, just in human skin,” she continues. “I don't know. But if it is, she's one of them. She is freaking otherworldly, man.”

Smith says that the pressure of being the child of two blindingly famous individuals (as well as the sister of headline-maker Jaden Smith) got to her sometimes. “What made me angsty and frustrated as a teenager was definitely feeling like I wasn't able to make mistakes,” she says. “I felt like I wasn't able to change and evolve and be a young person because everyone was just expecting me to uphold this image for my family and for the media or whoever.”

But “I definitely feel like I’ve overcome that,” she adds, confidently.

On Lately I Feel Everything, Smith says she is channeling emotions beyond the typical pop-punk teenage angst. “I think mostly I'm just dealing with my budding love for women and my budding love for love in general, and all the different forms that that can take,” she explains. “I just honestly wanted to talk about being Black and being queer and just what that's like, and being Black and doing rock and just talk about my experiences.”

In her mom, Smith has found another source of inspiration. Pinkett Smith formed the nu-metal band Wicked Wisdom in the early 2000s, and Willow and Jaden were along for much of the ride, hanging out on the tour bus. “Her perseverance in the face of racism and sexism was just fire,” says Smith of that time. “I feel like that was the greatest kind of inspiration she could've given me.”

Smith has said that her mom got death threats and faced other kinds of harassment when she was touring. This experience made Pinkett Smith nervous about her daughter stepping onto the same kind of stage. “She first said that she wanted to do metal, and of course, musically, I was happy, but I was concerned,” says Pinkett Smith. “I didn't want her to have to deal with that scene — it could be rough for a Black woman. And then she moved more into the punk genre, and I was like, OK, that'll work.”

She recalls that little Willow was obsessed with getting into her shows, even at a young age. “She used to beg me,” she says. “She's like, ‘Mommy, I want to see you play so much.’ And I remember a lot of times I would see her in the back on the shoulders of the security guard.”

After the shows, “we would get on the bus and all three of us — me, Jaden, my mom — would just cuddle and fall asleep,” says Smith. “Just being lulled to sleep by the moving of the bus is such a nostalgic, beautiful memory for me.”

In May, Smith surprised her mom on the set of Red Table Talk by reuniting the band members of Wicked Wisdom and performing one of her mom’s old hits, “Bleed All Over Me,” in the Smith family’s airport runway of a driveway. Soon, Smith says, she’ll go on tour herself. And her mom will be invited on the bus.

“I just want all of the Black girls who were bullied in school for liking punk and metal, and for trying to perm their hair and flip it to the side and do all of this shit — I'm here for them and I want them to feel seen and want them to feel heard,” Smith says of promoting the album. “That's my bottom line.”

After the tour, Smith plans to release her first novel — she’s coy about the details — and, oh yeah, celebrate her 21st birthday. “I need to think about what the plan is a little bit more,” she says when asked about the milestone celebration. But, she adds, “every year is a blessing.”