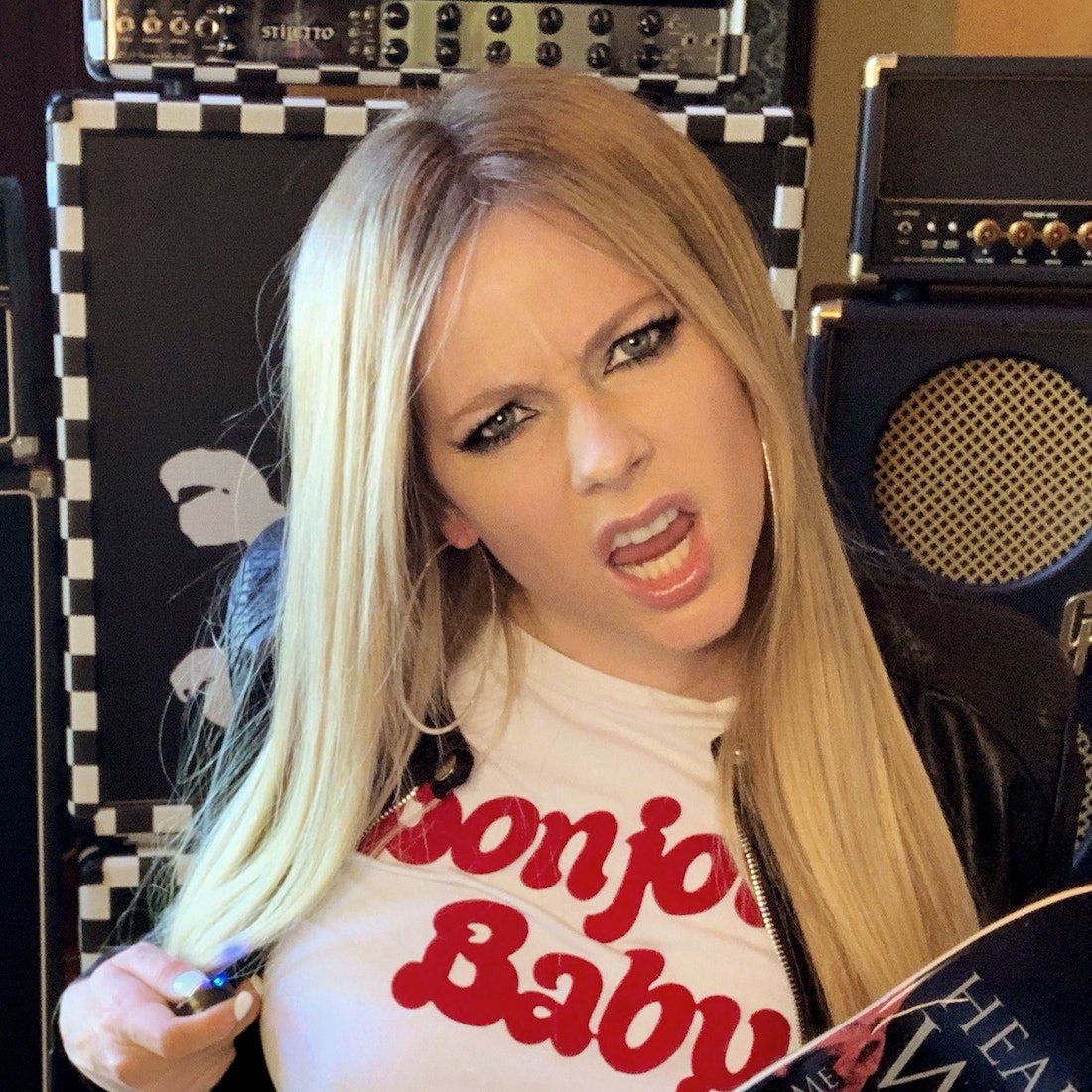 A Night In With Avril Lavigne

The singer talks music, eyeliner, and house parties from the comforts of her own home.

Avril Lavigne can do her own eyeliner — a smudgy, inky black that's been her signature for nearly two decades — in five minutes flat. It's a feat she announces with a sense of pride, exaggerating a fluttering of the eyes to show off her latest doing. It’s also a skill that comes in handy when a global pop star finds herself quarantined with a full day of video interviews and no glam squad.

Normally, Lavigne only wears mascara and some eyebrow gel while at home in Los Angeles. Today, however, she's in work mode promoting her latest single, so full eyeliner it is. The song, “We Are Warriors,” is a remix of “Warriors,” off her 2019 album Head Above Water, the net proceeds from sales and streams will go to global health organization Project HOPE’s COVID-19 relief efforts, in partnership with the Avril Lavigne Foundation. “My whole tour got canceled, and I thought, ‘I want to be able to do something and give back somehow,’” she explains. “I’ve been moved by the frontline workers and what they are doing, and they are being referred to as warriors. I took my song ‘Warriors,’ and re-recorded it in the home studio to make it ‘We Are Warriors,’ about everyone who is risking their lives to help. It’s a small token of my appreciation.”

Now, Lavigne, 35, is winding down for the night in her home studio. “I still have high-waisted jeans on, and I can’t wait to take them off,” she says over Zoom, sipping on a colorful red liquid she later identifies as water with added electrolytes. She’s cross-legged on a keyboard bench, above which hang several black and white framed photos of herself. “I was thinking today that maybe I should film myself doing makeup,” she says, laughing at herself. “I’ll be like, ‘Hi, today I’m going to be an influencer. Let me get my camera angle right.’ We’ll do everything except contour.” The key to the Avril Lavigne eye, she explains to her audience of one, is the blending. “With a smoky eye, you cannot just do black,” she says. “You start with white, then you put grey, then a little bit of brown, and then black on the ends. You have to blend all these colors. Does she have a favorite eyeliner? “Yes, b*tch!” It’s MAC Eye Kohl in Smolder.

With her pin-straight blond hair and a bubbly SoCal-by-way-of-Canada drawl, Lavigne still looks and sounds like the 18-year-old tie-wearing punk who came onto the scene back in 2002. But the singer who once penned a song called “Here’s to Never Growing Up” is also in possession of a decidedly adult domestic streak. “My house has never been cleaner,” she says. “I organized all the linen closets.”

Lavigne has been quarantined in her home, where she’s lived for five years, alongside two friends, and has been taking the stay-home orders seriously. “No one is coming in the house, and we are not seeing other people,” she says. She’s adopted a mantra for her new normal: “think smarter, not harder.” “Instead of cooking three meals a day, we cook just one big meal and eat it all day long,” she says. “Then one of us is on dish duty, and I’ll do the floors — I like doing the floors because I think it’s a form of cardio and that I’m working out.” Among Lavigne’s go-to meals are roasted chicken with vegetables, slow-cooker chili, and truffle pasta. “I don’t bake,” she deadpans.

Lavigne became acquainted with the stay-at-home lifestyle following her 2014 Lyme disease diagnosis. “I spent so much of my life on tour, and then after I got Lyme disease, I find that I like to stay put,” she says. “I’ve experienced isolation before, honestly. I never considered myself to be a homebody, but now I think I might be.” Lately, a night in for Lavigne involves drinking plenty of tea — “I’m not drinking [alcohol] really,” she notes. “I’m trying to stay really healthy because I need to keep my body healthy. I’ve had a couple of beers, but I make a lot of spa water and drink a lot of tea and fresh green juice” — and binge watching Schitt’s Creek, which was filmed in her home of Ontario. “They mentioned my name in it,” she says. “I was flattered. I’m just saying if they decide to make a movie, maybe I can make a cameo.” (When asked about Ontario’s other best television export, Degrassi, Lavigne came up blank: “What is it? Is it a show?”)

Lavigne still keeps rockstar hours — these days, 11 a.m. is her normal wakeup time — but all those other hard-partying impulses have gone away. “I don’t totally like to go out, unless I’m in a specific mood,” she says. “I love going to dinners and going to concerts. In my 20s, all we did when we weren’t on tour was go out to the club and party. I think I got it out of my system. At this point in my life, I’ve been around the world and on my time off, I want to chill a little bit.”

Now, she just lets the people come to her. “My house is definitely the party house,” she says. “We play music, we skateboard in the house, we skateboard outside, we dirtbike illegally in the street, we have barbecues, we play beer pong.” That sounds more like the sk8r grl that’s looking back through the screen — until she throws another curveball. “The party playlist right now is all country,” she adds. “I’m so into country music.”