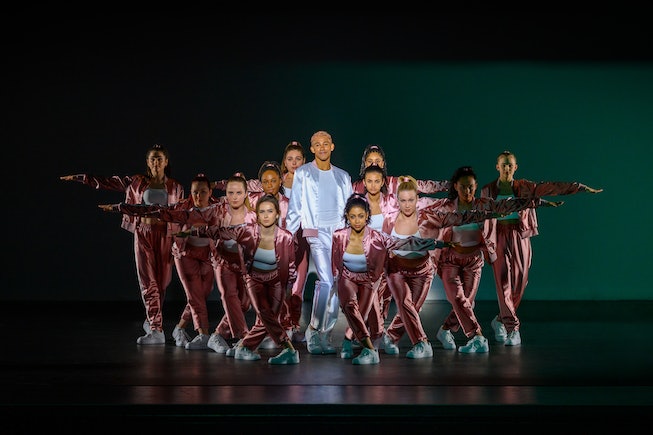 Over the last few years, Netflix has done more than enough to establish itself as the leader in teen entertainment. From the sentimental queerness of Alex Strangelove to the cloyingly retrograde politics of The Kissing Booth, the streaming service has capitalized on the underserved teen market, turning the stars of these franchises into bona fide social media celebrities in the process. And while most of these films are just suitable enough — easygoing fare that fulfills its duty of keeping young adults distracted for 90 minutes at a time — every now and then, Netflix stumbles on something more. It’s how 2018’s To All The Boys I’ve Loved Before worked its way up to a 96% Rotten Tomatoes score or how The Half of It has become not only one of the best teen rom-coms in recent memory, but one of the year’s best films — period.

The latest entry to the category is Laura Terruso’s Work It. In the grand tradition of “senior year of high school films” like Lady Bird, Blockers, and last year’s Booksmart, Work It follows Quinn Ackerman (Girl Meets World’s Sabrina Carpenter), a high-achieving high school senior whose lifelong goal is to attend Duke University. (There’s a typically heartbreaking reason for why she’s put all her eggs into the Blue Devil basket.) She’s done everything she can to fulfill this goal — “I’m first in my class. I am a National Merit Scholar. 4.0 GPA. I volunteer three nights a week at a local nursing home near my house. I’m also Student Government treasurer,” she notes during an interview with one of the university’s admissions officers — but in today’s oversaturated economy of well-rounded students with resumes tailor-made for college acceptance, Quinn finds out that, even with her perfectly-curated list of qualifications, nothing really separates her from her peers. “Can you do for the cello what Lizzo does for the flute,” the admissions officer (a perfectly-cast Michelle Buteau) deadpans when Quinn adds that she has also mastered the instrument.

In a desperate attempt to course-correct the entrance interview she thought she’d nail, Quinn lets slip that she is a part of The Thunderbirds, the well-respected dance team at her high school, who are also the reigning champions of her town’s annual Work It Dance Competition. (In reality, the most she ever contributed was controlling the lights for their performances — and after an unfortunate accident in the film’s opening scene, she no longer even holds that role.) But to her surprise, the admissions officer seems impressed, even hinting that if she gets to see Quinn dance at this year’s competition, the overachiever might be a shoe-in for acceptance.

Seemingly left with no other options, Quinn sets forth to get into the competition. Initially, she tries to officially join The Thunderbirds, but is told at auditions that, as a result of her earlier mishap, she’s been deemed persona non grata for the team. So she does the next best thing: she tries to form her own dance team. First, she recruits her best friend Jas (YouTube sensation Liza Koshy), an actual member of The Thunderbirds, who initially turns down the offer for the simple reason that Quinn, it turns out, cannot dance. But after roping in former championship dancer (and future love interest) Jake (To All the Boys’ Jordan Fisher) to help with choreography, Jas gives in, and soon, Quinn begins tapping fellow misfits — benched soccer players, goth Instagrammers, and struggling karatekas — to join her makeshift squad.

It’s in this set-up that the movie finds its beating heart. Work It surely is not the first film to lean on the idea of a “group of misfit underdogs” as an entry point for exhibiting personal growth, but the Netflix film does a satisfactory job of using the familiar formula to tell a story that very rarely feels trite. Watching a group of strikingly different personalities come together to help each other be a part of something greater than themselves will never feel less than uplifting, and Work It does everything in its power to elicit that very response. Luckily, it works.

Much of this is owed to the strength of its cast. Once again, a young adult film is filled with actors way past their teenage primes. But unlike the case with, say, Riverdale, it’s not entirely implausible that these actors could still live at home with their parents. In the lead role, Sabrina Carpenter, already a star because of Girl Meets World, shines, perfecting the slightly awkward, slumped-over demeanor that many would associate with the bookish nerd she’s supposed to represent. Liza Koshy is equally delightful as Jas — with her high energy and bubbling confidence, she’s the perfect foil for Quinn, and the two aptly play off each other. Jordan Fisher is perfectly charismatic as Quinn’s reluctant love interest, Jake, a former leading dancer that has since become jaded after suffering a serious knee injury that cut his career short. And Love, Simon’s Keiynan Lonsdale is deliciously catty as Isaiah, the haughty captain of The Thunderbirds. Though his sassy, overconfident bully is positioned as the film’s chief antagonist, you can’t help but cheer whenever he’s on screen. (In a running gag, Isaiah insists that his peers refer to him as “Julliard” for...reasons too obvious to explain.)

In many ways, Work It feels like a modern-day answer to older films like Center Stage and Fame, movies about young adults using dance to communicate their inner desires. But while those films often aimed to be something more than just a teen dance flick — Center Stage was as much about class and race as it was about common teenage angst and ennui — Work It feels content just being a fun, lighthearted romp. With its deliberately low-stakes, Work It crafts itself as an easygoing affair about finding your tribe through the healing power of dance. And throughout the film, dance is healing — the choreographed sequences, which are plentiful, are sparkling. Early on, Jas and Isaiah erupt into a spontaneous on-campus dance battle, where their acrobatic moves are unsurprisingly met with rapturous applause from the crowd that quickly forms around them — especially when Isaiah finishes off with some rather impressive vogueing. And the final performance at the Work It championships is as visually striking as it is triumphant, leading Work It to an ending that feels earned, even if it is fairly predictable.

As quarantine rolls on, I’ve found myself less inclined to engage with “serious” films that require my undivided attention, often opting for simpler narratives that don’t aim to be anything more than what’s on the immediate surface. For better or for worse, Netflix’s extensive library of teen fare has proved the best satisfier for this particular craving. And while Work It would have made an ideal distraction on that principle alone, I actually found it to be much more enjoyable than I expected — something easy-to-swallow but surprisingly engaging. Despite its familiarity, Work It stands out for the new things it does bring to the table. It’s exactly as Michelle Buteau’s admissions officer says in the first ten minutes of the movie: “[I don’t want] applicants that just can fill the box. I want an applicant to blow the box up.”