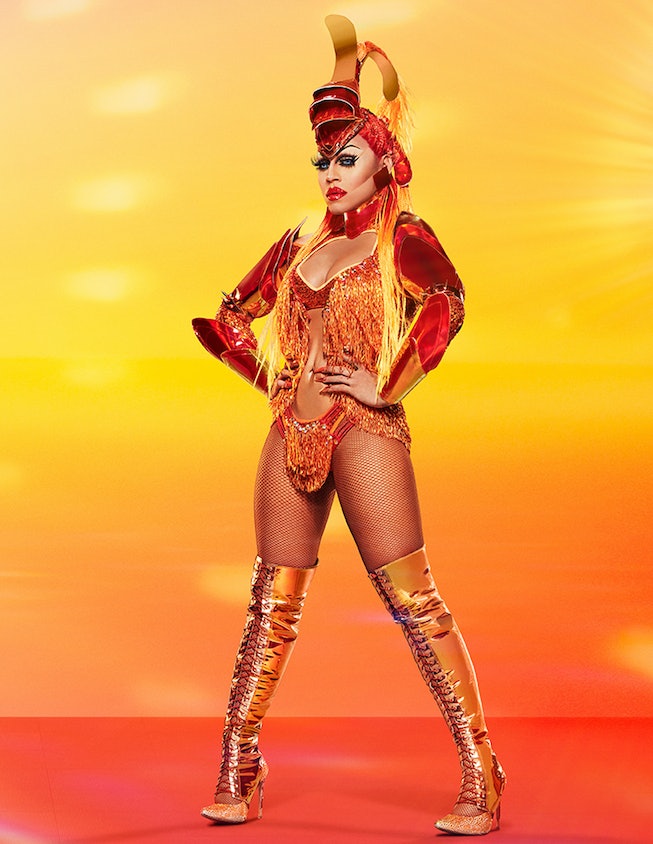 No one was surprised when Yara Sofia won Miss Congeniality after placing fourth in season three of RuPaul’s Drag Race. The Puerto Rican queen was charismatic and endlessly entertaining, eliciting laughs from the judges and her fellow contestants at every turn. When she returned for the first edition of All Stars just a year later, she managed to do the same, even winning that season’s slightly altered version of the all-familiar Snatch Game with a no-holds-barred take on Charo. But thanks to that season’s paired team structure, she was unable to truly show off her skills as an individual.

Thankfully, the Las Vegas-based queen was given another chance to return to the competition — and this time, she was determined to make a strong impression on her own. She did as much straight out the gate, netting the season’s first win with a never-before-seen talent that can only be described as “choreographed breastplate-shaking.” But after starting things off on a high, Yara struggled to maintain the momentum. Despite being known for her sewing prowess, she landed in the bottom for the season’s first design challenge, and two weeks later, landed there again after delivering a Shakira performance that was all hips but very little face.

Placed up against a season 11 fan favorite, A’keria C. Davenport, Yara Sofia quickly resigned herself to the fact that her fellow competitors (several of whom competed alongside A’keria in season 11) would vote her out and decided not to fight for her spot when it came time to plead her case. After a lip-sync between the week’s winner Jan and the lip-sync assassin Jessica Wild, Yara was sent packing, bringing her third run on Drag Race to an abrupt close.

Ahead of her elimination, NYLON hopped on the phone with Yara Sofia to talk about going home, why she refuses to “beg,” political correctness, valuing the opportunity to not be forced to compete in teams, and the crazy story that inspired her instantly iconic breastplate performance in the All Star Variety Extravaganza.

What would you say went wrong leading up to your elimination this episode?

Well, honestly, I think I was good. I honestly think I was one of the best. But this competition is getting harder and harder and I knew stuff like this would happen — like, if I was in the bottom, I knew I’d probably get sent home because I'm the only queen from season three. You know, these bitches say they’re [voting] fair and all that BS, but they know they have groupies. Like, there are a lot of queens from season 11 and blah, blah, blah. So I knew this would happen.

That’s understandable. But I think watching the episode, it was clear that a lot of queens ended up making their decision to eliminate you based on the fact that you didn’t seem to be fighting for yourself, especially when compared to A’Keria C. Davenport, who was desperately pleading her case the entire time. Is there a specific reason you didn’t fight?

Yeah, because I'm not a beggar. I'm not going to beg for something. I feel like sometimes it feels fake. Like, I'm not going to take advantage of your friendship or whatever, just telling you, “Oh! Pick me! Pick me!” I'm not that person. Also, when you know stuff is coming, you know it's coming. So I knew whether I plead my case or begged or whatever, between me and A’Keria, I was going to be sent home because there are more season 11 queens. It was going to happen and I knew that. So if the queens say stuff like “she didn’t beg,” it's pure BS. Point-blank.

So you think no matter the circumstance, if it came down to you and A’Keria, you would always be the one to get the chop?

Yep. Yep. There are just more groupies there.

So I’m assuming you don’t regret not fighting harder for your spot in the competition?

It really doesn't matter. What kind of pisses me off was that this was the second week A’Keria was in the bottom. You know what I'm saying? I was in the bottom once and won twice, if you see it that way. [Editor’s Note: Yara was in the high team for episode 3, but Trinity K. Bonet was the week’s actual winner.] I won the first week, so I should not be begging for my place. People need to know that. They always say they're going to vote [based on] whatever [each queen does] in the competition, but look at the receipts. A’Keria has been in the bottom twice — last week and this week — so why should I be begging?

All the queens have to look out for themselves, so I'm not going to be faking like, “Oh my god, we're friends. Please do not pick my lipstick.” That's BS. It's fucking bullshit. I'm not going to beg when the cards are there. That's what we agreed on in the beginning — that we would pick lipsticks based on this competition, and based on this competition, I should not be sent home.

You first competed on season three of Drag Race, which was right before the show really broke through to the mainstream. How differently does it feel to come back onto the show now, a decade later, when it obviously has a much larger viewership and fanbase?

Well, like you say, it has a larger audience so you have to be more inclusive of everything you say. You have to be politically correct. You have to be careful with certain things. I mean, I would change a few things if season three was airing now because you don't want people to get offended. Even just for jokes and sayings, times have changed. Now, I do have to be really careful.

You also competed on the first season of All Stars. What do you think is the biggest difference between your first stint on All Stars and this one?

The difference is we're not in teams. Also, in a positive way, you've reached more fans and there’s just more appreciation. It's more exposed. You are more in the center like never before because of social media and all the new fans that are loving the show. So they watch the season and then they go back to watch season three. I love it. It's more special.

Most queens come onto All Stars with an intent to prove something, fix their reputation, or show off how much they’ve grown. Given that you last competed almost a decade ago, what did you want to prove the most coming back to compete in 2021?

I wanted to prove that I don't have an accent because I'm actually from Mississippi! [laughs] I'm just kidding. But [what I didn’t get to show in] All Stars 1, I finally got the chance to show here. Nothing against [my former teammate] Alexis, but the stuff I planned for All Stars 1 was for me. If they would’ve told us before getting there that we were going to be in teams, oh, baby, it would have been another experience. Oh, baby, it would’ve been sickening! It would’ve been cohesive. I would’ve planned with Alexis. But that was the weird thing about All Stars 1. So this time around, the first thing I made sure was, oh, no teams! I checked that box, so whatever I am now, I think people can see that I have evolved.

Speaking of evolution, you won the first challenge of the season with a performance that I think will go down in Drag Race history. How did it feel to return to the Main Stage almost a decade later and immediately impress the judges enough to secure an early win?

That is an example of why teams were so bad in All Stars 1. Actually, before I left, I told Alexis what [performance] I had planned and she was like, "I don't think you should do that." And then, I said to myself, "I'm going to do it. I have to do it." So when I won, I came back and was like, "See, bitch! I told you!" That's one example — when you're not in teams, there's just more freedom and you’re more able to express yourself 150%. So I decided to do that number.

The origin story for the performance is that my mom used to clean the house, taking all the demons out of her system and stuff. But the only thing I focused on was her titties bouncing. So I said, oh, that’s the inspiration for my number! I'm going to take all the bad vibes and negativity out of your system — just shake them damn titties and you will see that there's no bad vibes anymore!

You’ve been praised for being an incredible seamstress and designer on every season you’ve competed in, but during this season’s Blue Ball challenge, you landed in the bottom two. Knowing that sewing is one of your strengths, how did that feel?

Also, it holds you back that you have to run to get the best materials. It’s just a bunch of materials on a table and then it’s like, “Go!” and you have to pick whatever is best and is going to work for you. Like, for example, Scarlet’s dress was lovely, but that was literally fabric. There were like six yards of stretchy fabric, but she was lucky. I had to sew tarp, which is not lovely.

When Jessica Wild came out as this week's lip sync assassin, you spoke in a confessional about being very good friends with her. Knowing that you were in the bottom and could end up being sent home, how were you feeling when you saw her?

It felt bad. I know a lot of Puerto Rican queens that have been on the show, including [season one and All Stars 1 contestant] Nina Flowers. They're close to me, but literally Jessica is my best friend. I’ve known Jessica for years, way before we got into drag. So it felt bad because there was a possibility in the moment that she was going to say name. For the record, I know she didn't send me home — not literally, at least, because she didn't pick me. But she still carried the lipstick of the other queens, so I knew there was a chance that she would probably say my name.

What challenge are you sad you didn't get to compete in?

Snatch Game. I was going to do LaToya Jackson. By the way, I wanted to do it because, in my [first] season of All Stars, I won that challenge. But nobody sees it as a Snatch Game because it was not called Snatch Game; it was called something else. [Editor’s Note: It was called “RuPaul’s Gaff-In.”] I played Charo. I don't know if you remember. So every time they post a list of all the winners of Snatch Game, I'm never included. I understand that it was not Snatch Game in All Stars 1, but it was the same shit. You were doing celebrity [impersonations] and you were doing jokes. It's the same shit. I wanted to do LaToya Jackson and just win that to prove that I should be in the Hall of Fame for Snatch Game celebrity [impersonations] or whatever.

Now that you're gone, who are you rooting for to win the whole competition?

None of them! I'm just kidding. Honestly, I really don't know. But it's time for Sonique. Maybe I’ll regret [saying this] later. I haven't seen all the episodes, so I haven't seen her confessionals, and maybe she throws dirt on me. So if that's the case, I take it back.