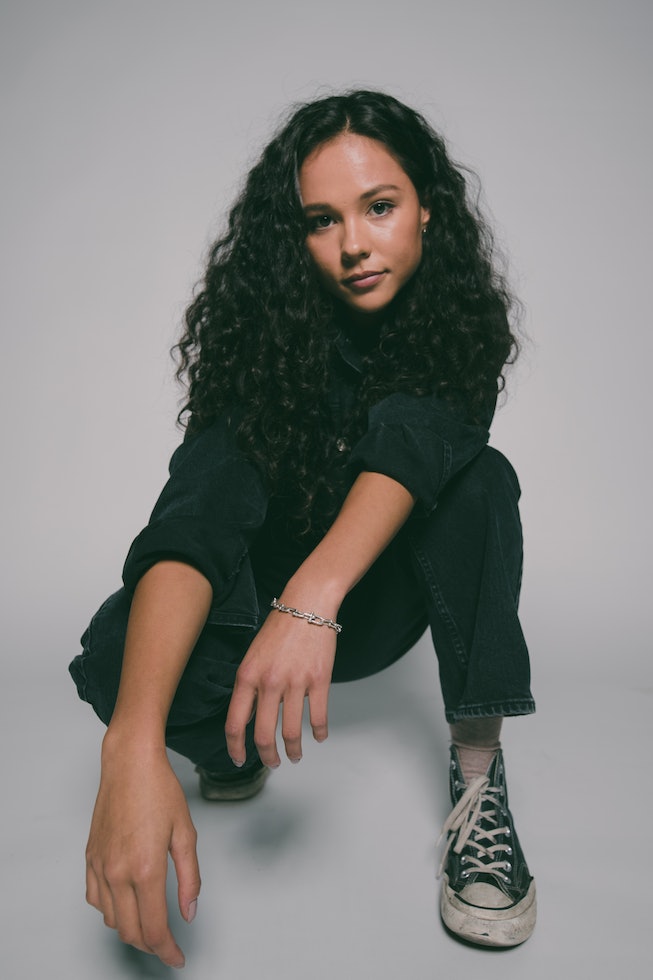 On Breanna Yde’s 2022 EP, Send Help, the singer and actress writes about mass shootings, the pains of growing up, and feeling like she’s living in a simulation. Though heavy, these are the hard truths the current generation of teenagers are reckoning with today. At 19, Yde, who makes music under her surname, knows she’s going against the grain by speaking them out loud.

Though Yde first got her start as an actress in the Nickelodeon series The Haunted Hathaways, she’s since proven herself to be an intuitive and dynamic songwriter with a rich and captivating voice. Her first-ever music release, “Stopped Buying Diamonds,” skewered the boomer-toned Economist article that asked why millennials aren’t buying diamonds. On her new project, released in September, she broaches more generationally relevant issues through a personal lens; “'Cause when you get older/ You realize the answers aren't out there,” she sings on project standout “Old Her.”

Below, the singer exclusively premieres the Send Help short film on NYLON, the accompanying visual which expands the project’s inquisitive and emotional world. Using footage of the previous music videos she’s released, the 11-minute visual uses dance, movement, and a few visceral moments to illustrate a loose story that Yde says is about life, death, rebirth, and her belief in humanity: “That was the through-line for this whole project.”

“For me music videos are such a crucial part to the storytelling of music in general, and I've always found music videos aren't just another way to drive people to listen to the music,” YDE tells NYLON. “For me, it's an art and it's all about storytelling.”

Watch Send Help, below, and read on as YDE tells NYLON about the making of the film, the impact Lady Gaga’s “Telephone” has had on her, and why she’ll continue to speak on topics that go against the grain of what’s expected of a teenage girl.

How did you come up with the idea of wanting to put a short film together for the project?

YDE: It's always been something that I've been obsessed with. I've been obsessed with long-form storytelling for short form art. When I was younger and Gaga dropped the “Telephone” video, that was mind blowing to me. It's like this 10-minute video for one song, and you're just like, How can someone tell this story for just a pop song? There's something so infatuating about that. I think once I finally had all the music put together and I knew what order the EP was going in, I had a general gist for where the production was headed.

Conceptually, what kind of story were you hoping to tell with the film?

The entire premise of the film is really the cycle of life, death, and rebirth. I think that plays into the music and this grand theme of our identities. We're always evolving and changing as human beings. A lot of the time, it feels like to get past one part of your life and this identity that you hold onto so tightly, you kind of have to allow yourself to die in a sense, obviously in a very metaphorical sense. Death is a very strong concept throughout the album in a very literal sense.

For me, that was the story that I wanted to portray visually. And I love dances. I think movement is such an art form. And so having these amazing dancers and an amazing choreographer who helped portray this very human experience, the cycle of life and death all comes back down to humanity and life. It's really all just about telling the human story in the least direct and least literal way.

Was this your first time working with dance and choreography in this way? How was that experience for you?

I've never exactly considered myself a dancer, but it's always been something that I've been obsessed with. I remember being six years old and my parents would throw me a birthday party and there would be a dance floor, and I'd be getting down and dirty on the dance floor. And I've always just been so obsessed with that art form, but I never felt like it suited me and my body type and the way that I moved. But I feel like through this experience, I knew movement was a crucial part of the storytelling.

It was almost scary to make that call and make that decision of, No, I'm going to do it. I'm actually committing to doing this. It was fearful, like I didn't want to do it. But it's one of those things where you have to do the things that scare you, and this was one of them. It challenged me and it completely changed the way that I view music and the way that I view making art, which I think is really cool.

Tell me a bit about the end of the video; you’re bleeding through your chest. What was it like to shoot that scene? It's very visceral.

It was extremely visceral. It was one of those things where it literally took us four hours to get the shot because the contraption that we had for the blood wasn't working right. We had done take after take and the blood just wasn't working. We had one of the white shirts, but we had different colors of the tank top and a limited amount of the shorts, so it was like we literally had one take to get it once it worked. It was one of those really, really cool special moments where right when you started rolling, you knew, it was going to be the one.

“It was really cool to make an entire body of work that went against the grain on everything a teenage girl should be writing about.”

You said once that you’re “not here to write love songs” and on your EP, you touch on heavy topics like mass shootings, the turbulence of growing up, and the dystopian feeling of living in the world today. Why are these important topics for you to write about?

As a writer, you don't necessarily choose what you want to write about as much as you think you do. I've always viewed it as I'm the medium and whatever wants to come out of my soul will transpire eventually. I definitely had gone into sessions and written love songs and attempted to take that approach, but it just didn't align with me. I think there's so many deeply impactful experiences that I've had regarding the world and the state of the world that I literally didn't have a choice but to talk about these things. I think the most important part about art is liberating yourself and freeing yourself from any sort or preconception about what you should be writing about or what you should be talking about. It was really cool to make an entire body of work that went against the grain on everything a teenage girl should be writing about.

Is there a main message that you hope your fans take away from this project and this film?

I think with anything art related and creation related, I hope they take away whatever it is that they want to take away and whatever feels right to them. Ultimately, for me, the most powerful learning experience of making the film and making this project is just humanity. We can lean on humanity and that is the most beautiful part of living. The fact that we're all different and we're all human and we can have conversations and we can have different perspectives. I think that there's something so powerful about that idea.