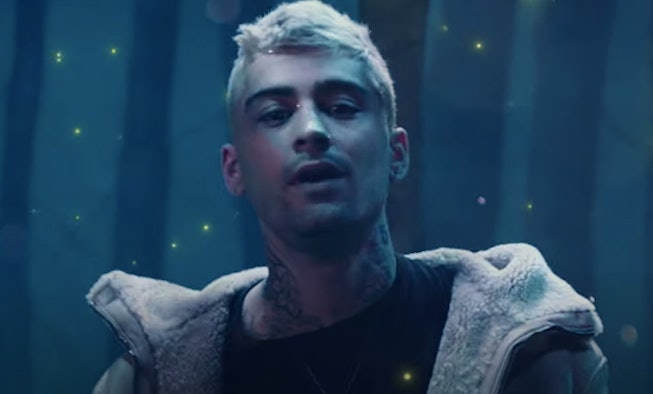 Zayn stans, your long-suffering days are finally over! After an almost three-year streak of near silence following the massive 2017 record, Icarus Falls, Zayn is actually releasing a follow-up album, Nobody Is Listening. Brooding record titles aside, Zayn continues on his R&B inflected streak, first with the lead single "Better," and now with "Vibez."

While "Better" explored the complicated feelings of ending a relationship with someone you love, "Vibez" offers a much simpler thesis: classic horniness. The track is all about the anticipation of a carnal evening — imagining what happens behind closed doors, fantasies come to life, and duh, the vibes that come with it.

The video, however, is a bizarre choice for the song that's more or less about having sex. Zayn walks through storybook-adjacent sets — a Sesame Street worthy recreation of a busy city street, an enchanted forest, a snowy river traversed upon with the help of the trusty S.S. Malik — only to end up back in his cardboard living room. It's a little too innocent considering the song's source material, and the vibes, as they say, are a little off.

Nobody Is Listening is being touted as Zayn's "most personal project to date," and will be released on January 15.