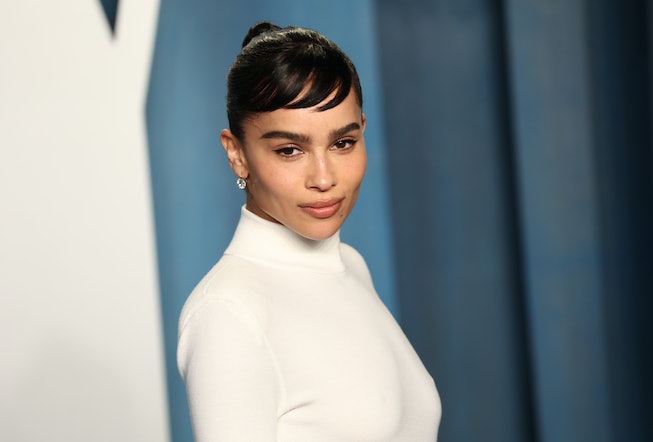 Zoe Kravitz has finally spoken about the backlash she received after criticizing Will Smith online for slapping Chris Rock at the Oscars back in March. After Smith stormed the stage to slap Rock for making a joke about his wife, the internet was abuzz with commentary, and Kravitz, who was also in attendance at the Oscars, joined in the chorus. The Batman actress posted pictures of herself from the evening on Instagram with the caption: “[A]nd here is a picture of my dress at the party after the award show -where we are apparently screaming profanities and assaulting people on stage now.”

Kravitz, who had previously earned nearly unilateral adoration from the internet, received a swift backlash for calling Smith out. Now, in a new interview with Wall Street Journal published on Tuesday, Kravitz reflected on cancel culture. “It’s a scary time to have an opinion or to say the wrong thing or to make controversial art or statements or thoughts on anything. It’s mostly scary because art is about conversation,” she said. “That should, in my opinion, always be the point. The internet is the opposite of conversation,” Kravitz continued. “The internet is about people putting things out and not taking anything in.”

Kravitz added that the experience of having the internet turn on her was humbling. “I was reminded that I’m an artist,” she said. “Being an artist is not about everybody loving you or everyone thinking you’re hot. It’s about expressing something that will hopefully spark a conversation or inspire people or make them feel seen.”

Moving forward, Kravitz plans on letting her work speak for her. “I think I’m in a place right now where I don’t want to express myself through a caption or a tweet,” she said. “I want to express myself through art. As for any regrets she may have, Kravitz said, “I’m torn about what to say right now because I’m supposed to just talk about it; I have very complicated feelings around it. I wish I had handled that differently. And that’s OK.”

The 94th Oscars were a night to remember. On Sunday, March 27th, celebrities gathered at the Dolby Theater to celebrate the best films of the year. What started as a typical night took a dramatic turn when Chris Rock went on stage. The comedian was there to announce the winner for Best Documentary Feature — which Questlove won, for his film Summer of Soul — but before he did so, Rock cracked a joke about Jada Pinkett Smith and was promptly slapped across the face by her husband, Will Smith, on live television.

Rocks’ joke compared Jada to G.I. Jane, because the actress recently shaved her head due to her ongoing battle with alopecia. After noticing his wife was visibly upset, Smith walked on stage and struck the comedian. Then he sat down and yelled, “Keep my wife’s name out your f**king mouth,” as the rest of the audience watched in shock.

Smith has since apologized to the academy and his peers during his acceptance speech for Best Actor and apologized directly to Rock via Instagram stories on Tuesday. Jada also took to Instagram and posted a photo of text that read, “This is the season for healing and I’m here for it.”

The couple's son, actor and rapper Jaden Smith, had a less gentle stance. Moments after the slap occurred, he tweeted “and that’s how we do it.” Their daughter, Willow Smith, has yet to comment.

Since the jaw-dropping interaction took place, celebrities have chimed in to provide their two cents on the matter. Several Hollywood figures have weighed in on the controversy and received their own immediate backlash, but comments by Zoë Kravitz have by far gone the most viral. The Batman star posted two photos of herself from the evening, with variations on the caption: “and here is a picture of my dress at the party after the award show -where we are apparently screaming profanities and assaulting people on stage now.”

Kravitz was then called out on Twitter for not only the comment she made but for resurfaced past behavior, including her seeming to flirt with a then 14-year-old Jaden Smith, when she was at least ten years older than him.

Read on for the reactions from other celebrities on The Slap:

Comedian Judd Apatow released a tweet claiming Smith “could have killed him.” Apatow's message has been deleted, but it read, “That’s pure out of control rage and violence. They’ve heard a million jokes about them in the last three decades. They are not freshmen in the world of Hollywood and comedy. He lost his mind.”

Meanwhile, other actors provided their perspectives on the incident.

Finally, Serena Williams responded exactly how we did at home. With pure shock.