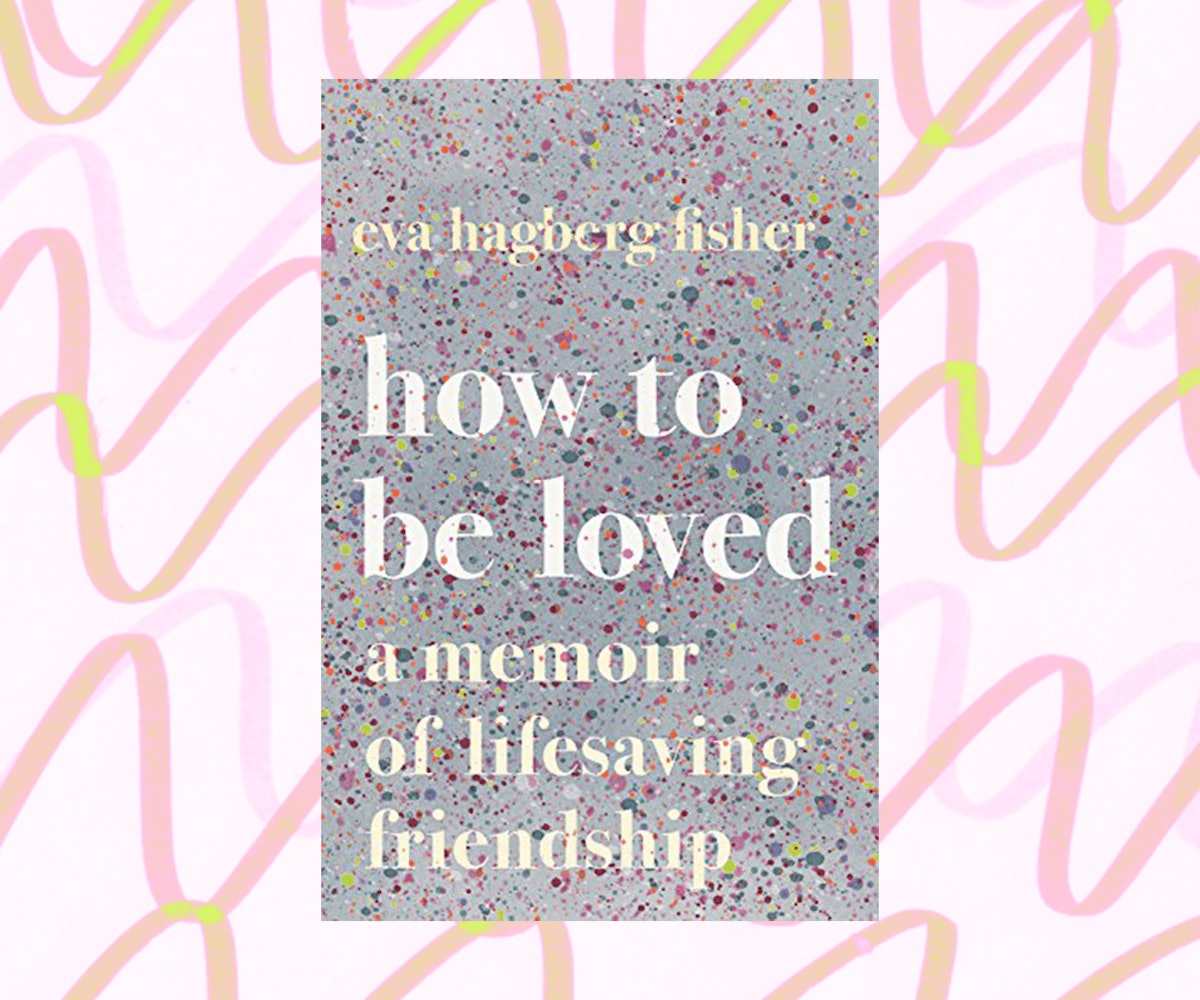 Many people—including me and perhaps even you, dear reader—find asking for help a deeply difficult process. In part, this may be because U.S. society has been shaped by ideas of self-sufficiency, which make many of us believe we're meant to do it all alone, abandoning the importance and value of having a community. We've been taught to see neediness as a weakness, proof that we are somehow lesser. And yet, there's likely not a single one of us who hasn't been forced at one point or another to lean on others. Just as likely, we've provided a shoulder for others as well. It's in these spaces of dis/comfort that Eva Hagberg Fisher's book, How to Be Loved: A Memoir of Lifesaving Friendship, dwells.

The memoir opens with a promise, of sorts: "When Allison and I met, it was not love at first sight." And so, of course, we can infer that it will be love, eventually, though perhaps not of the expected kind—not romance, but a different kind of intimacy. But more than this, the promise lies in the opening's first scene, where Hagberg Fisher tells us that she met Allison because they were both "used to going to rooms filled with sober alcoholics who talked to each other in a concerted effort to stay that way."

In other words, they met in AA, or a version of it—and an Alcoholics Anonymous meeting is, in the public imagination, a place where absolute truths are spoken, where honesty is a required part of the process, and where people are motivated to spill their secrets. Which may lead the reader to believe that this is what we're about to get from Hagberg Fisher: the whole, detailed, dirty, unvarnished truth. And we do—but only to an extent, as Hagberg Fisher carefully chooses where to divulge details, and where to gloss over them, in a successful effort to keep both a reader's attention and a sense of privacy.

In 2010, Hagberg Fisher made a move from East Coast to West, from the tall buildings and frantic freelance writer world of New York City to the hallowed halls of academia in Berkeley, where she began pursuing a Ph.D. After months and many meetings with Allison, a woman some 30 years the author's senior, Hagberg Fisher and Allison became friends. When Hagberg Fisher became suddenly and inexplicably extremely ill, she and Allison relied on one another, sharing a language of illness, of scans and test results and blood draws. Through this friendship, Hagberg Fisher learned to trust, to let someone in, to let her own guard down. More follows—Allison dies, after years of treatment, from cancer; Hagberg Fisher trades one medical issue for another, and then yet another creeps in, creating a long, exhausting cycle of illness she must contend with; and, in what seems to the author a kind of miracle, her friends remain a constant, rotating source of comfort, strength, and care to her. This may seem like a lot, but the memoir is quickly paced and slim, under 250 pages.

See, the memoir's subtitle—A Memoir of Lifesaving Friendship—is at the core of this book. It isn't an illness or recovery memoir, though versions of both are in it. It isn't a tell-all personal story, though it has moments of brutal honesty that made me fist-pump the air with excitement as I read. It's not even, entirely, a memoir about Allison and her capacity for extending friendship and care to others. Instead, it's a memoir that stays close to its topic: the importance of friendships to a well-lived life strewn with obstacles.

Early in the book, Hagberg Fisher spends plenty of time explaining the ways her judgmental, fearful thoughts (that live in us all, even when we fight against them) separated her from others. She relates these thoughts to her childhood spent with extremely accomplished, academic, serious-minded parents and step-parents, for whom intellectual achievement was paramount and personal connections only a secondary part of life. The echoes of this rearing are clear later in her life: During the months of getting to know Allison through meetings, for instance, the author wondered about Allison mourning her husband who'd been dead for five years: "Why wasn't she over it?" Learning that Allison had lived years beyond her original prognosis of six months, Hagberg Fisher writes: "I found all of this impressive and fantastical, but it also slotted her into a category of person I had no interest in (was afraid of): the sick." At the time, Hagberg Fisher saw her body as only "the vessel for [her] mind," which is how many of us, in an achievement-oriented society, learn to treat our bodies. Until, of course, those bodies become sick, and we're forced to realize that the mind/body split is an impossibility.

The physical body remains a difficulty for Hagberg Fisher. In an early scene of her friendship with Allison, the author grabs onto her friend's arm for balance, and Allison says, "That feels so good." Hagberg Fisher zooms in on this moment:

I forced myself to pause. To open my palm, to lay it against her arm. The tightness inside me unwound again, just one more millimeter. She shifted, sitting up so that her entire upper back was pulled away from the wall. She was wearing a gray cashmere cardigan and I tentatively touched her upper back. I felt her soften under my touch, felt her settle in to what felt for her like an easy intimacy—something I had never experienced. I hadn't been held much as a child, hadn't automatically learned to hug and squeeze and pat and touch, and so Allison's ease with touch, with responding to touch, with asking for it, was new to me. […] And yet the way in which she invited me to touch her was also a way of her touching me. This was not one-way, not a pat or a stroke of the arm, not the forced hugs I'd seen her experience at the end of the meetings. My hand was touching her, but her back was touching me. We were in this together.

It is in these moments, these pauses, that the narrative is most powerful. There's a lot the author keeps mum about—a lot left out, in other words, perhaps for a future memoir, or maybe simply because, as in those meeting rooms she's so used to sitting in, the truth of our reality is complex and sometimes exhausting to get into, and so we all pick and choose what stories to tell about ourselves, and how. Hagberg Fisher is a master at this, at skimming over what she doesn't deem important for this story: a two-year relationship with a woman named Cameron is over in two pages; falling in love with the man who would become her husband is a quick segment that emphasizes that he wasn't her caretaker as much as Allison and other friends were; elements of her complex illnesses—a brain tumor, a heart defect, later a full-body autoimmune issue—are summarized, mostly in order to give room to interactions with and support of friends. "[W]hat I needed," Hagberg Fisher writes, "wasn't only someone to sit next to me, though I did need that. I needed people to tell me that it was okay not to be brave. That I didn't have to believe in myself or my inherent strength." And it was Allison, of course, the friend whose voice remains in the author's mind even now, years after her death, who explained, "It's brave to show that you can be scared." And: "It's the hardest thing in the world to ask for help."

Ultimately, really, what Hagberg Fisher has written isn't a love letter to this one single friend. It's an ode to our communities: "When it comes to illness, individuals become exhausted. The group, though? That larger collective, made up of ever-shifting parts? It's inexhaustible." We don't all have a larger group, a community, to lean on—but I suspect, often, that more of us have this than we believe we do, trained as we are to isolate ourselves, to distrust those trying to get close to us. It sometimes takes a tragedy—illness, death, financial strife—to alert us to the fact that we are, indeed, so much more loved than we even know.

How to Be Loved: A Memoir of Lifesaving Friendship is available for purchase here.