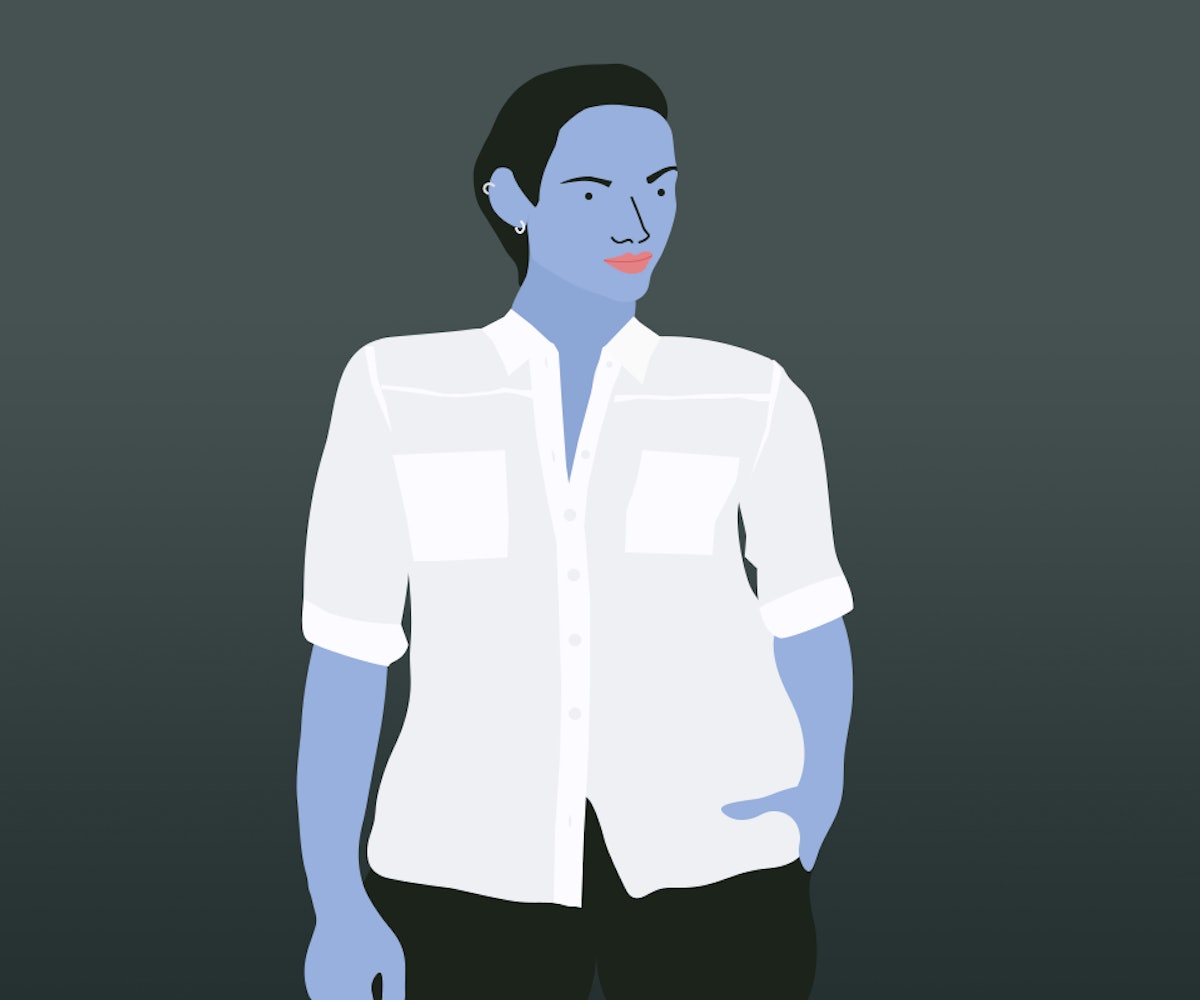 In The Inventor, HBO's documentary about disgraced entrepreneur Elizabeth Holmes and her now-defunct biotechnology startup Theranos, there's a scene in which Holmes tells a journalist why she wears the same black outfit all the time: "In line with designing my life to be able to give every bit of energy I have to [the company]," she says, "I have a closet that has a very large number of the exact same set of clothes, and every single day I put the same thing on, and I don't have to think about it."

The shot shows a rack of black turtlenecks, also the uniform of choice of Holmes's hero, Apple founder Steve Jobs. Jobs himself decided on his now-iconic outfit after a trip in the early 1980s to Sony headquarters in Japan. Afterward, he became friends with Issey Miyake, who designed the Sony factory-workers' garb, and asked Miyake to make "like a hundred" black turtlenecks just for him. In his 2011 biography of Jobs, Walter Isaacson suggests Jobs liked the idea of a uniform for himself "both because of its daily convenience (the rationale he claimed) and its ability to convey a signature style."

Isaacson's slightly snooty parenthetical is interesting in its skepticism that one's choice in wardrobe can ever be thoughtless. This may be especially true for people like Jobs and Holmes, whose companies and complicated legacies were built on their carefully calculated ability to spin stories. Jobs (and thus, Apple) preached sleekness, simplicity, and ease of access. Holmes and Theranos preached these things too, though what she also sought to convey, with perhaps an implicitly feminist bent, was that she should be taken seriously the way a man would. Both Jobs and Holmes were the figureheads of their companies and expounded their business philosophies through their "signature style." Consummate storytellers, they were especially intentional with the curation of their own images.

Yet we shouldn't discount the "convenience" of an extremely limited closet. Insofar as I can lump myself in with Jobs and Holmes, I both understand and share this impulse to take away the illusion of choice from one's wardrobe. I too have a uniform of sorts. Pretty much every weekday for the past two years, I've worn a variation of the same shirt: the Express Portofino.

The first time I saw it, I was at the mall I had frequented as a teenager in suburban New Jersey. I was with my partner, who had grown up in Brooklyn and seldom found herself in a shopping mall. Like me, she's a bit of a tomboy; we talk often about how hard it is to dress ourselves. Clothes and the procurement of them confound us. We inhabit that confusing middle between "butch" and "femme." We wear makeup, but just eyeliner. We shrug at the word "skincare." We each have only two pairs of shoes. We wear Chapstick.

For me, my wardrobe has always been a source of anxiety. Growing up, my two closest friends were femmes, and I would beg them to dress me, to induct me into what I saw as the hallowed halls of femininity. They'd acquiesce, but would quickly become frustrated with my pickiness. Tops were too frilly, too form-fitting, too floral, too cropped, too sheer. I had once enlisted their help in finding an outfit for a date; they acted aggrieved when I told them I ended up wearing a pink Blood Brothers T-shirt. At least it was pink?

I went to a high school that, to my delight, had a dress code. It wasn't exactly a uniform, but we could only wear button-down collared shirts and neutral-colored slacks. On our feet, we could only don loafers or Birkenstocks. Our campus brochure looked like a Land's End catalogue. (Land's End was indeed where most, if not all, of our clothes came from). This seemed to please no other female student but me; that the risk of being bullied for wearing a dumb outfit was eliminated comforted me.

That day at the mall, though, my partner and I came upon a large display in the window of Express featuring basketball star Stephen Curry wearing a dapper shirt and vest. We wondered why we couldn't just wear what he was wearing; it was sleek, simple, easy. Out of curiosity, we walked through the store's men's section. But we both knew we wouldn't find anything there. Guys' clothes never seemed to fit our forms. I have what could be described as an androgynous body, and since I only wear sports bras, my lack of obvious breasts makes it look even more boyish. Despite this, I hate being misgendered. I once wore a men's long-sleeve shirt to a restaurant and a man asked, "Dude, why are you waiting so long in front of the woman's bathroom?" We were both embarrassed by his gaff.

We wondered why we couldn't just wear what he was wearing; it was sleek, simple, easy.

In the women's section of Express, I perked up upon seeing a rack of very plain button-down shirts in a vast array of neutral colors. The material was pliant, not starchy or stiff like an oxford shirt. The blouses were at once flowy and form-fitting, serious and relaxed, sturdy and soft. I was also attracted to the way they were displayed: multitudinous and multihued, yet uniform, like a new box of Crayola crayons. This gave me a pleasing sense of partial possibility; I had only to choose the color. I bought six of them that day. I now have 24.

To be clear, the Express Portofino is not the first button-down shirt I've ever tried on or owned. I shopped a lot at places like American Eagle and Uniqlo, the latter of which has become internationally renowned for its simple, androgynous attire. At one point, American Eagle sold what they called a "Boyfriend Shirt," one of the many items of women's clothing apparently designed—or at least named—to replicate the experience of being a heterosexual woman tossing on, well, her boyfriend's shirt. The romantic feeling of cozying into a male lover's shirt was lost on me. Also, I found it too large.

If we are what we wear, the Portofino tells my story well. The blouse's plainness captures my androgyny as well as my wish to not stick out. No one's ever going to compliment my outfit, and that's fine. As an only child, I've gotten used to assigning meaning to things independent from the attention of others.

Like Elizabeth Holmes, I believe spending less time planning my daily outfit frees up more space to mull over what matters to me. I'm a writer and am finishing a novel; as many writers know, putting words to paper is only a part of the process. I'm also a book reviewer and editor, and when not thinking about my own work, I'm wrestling with others'. From the moment I wake up, my mind is filled with images and words and fake people.

Yet, I wish I could say that wearing the same shirt every day fully reduces the anxiety of dressing myself. The reality is that I work at a major women's magazine, with many women who spend a lot of time, energy, and money on looking good. I often feel I have to make self-deprecating jokes about my appearance. If someone solicits my opinion on fashion or beauty, I'll say, with some mix of shame and pride, "Don't ask me, I basically wear the same shirt every day." They'll laugh and walk away, and I'll go about my business.

NEXT UP
Fashion
The Mini Skirt Was The Must-Have Celebrity Fashion Item Of 2022
Fashion
The Founders of Gauntlett Cheng Want You To Dress In Vintage For The Holidays
Life
NYLON Daily Newsletter: November 23, 2022
Fashion
Kim Petras Wore An All-Denim Homage To Britney Spears At The 2022 AMAs