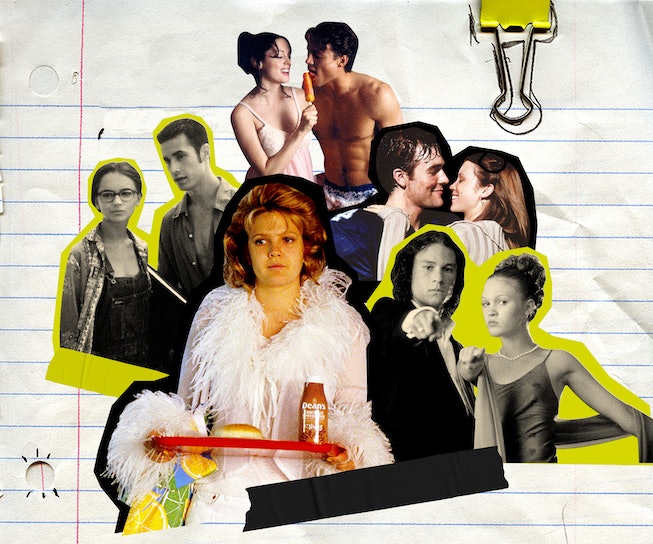 It may now be 2021, but when it comes to teen movies, we’re still partying like it’s 1999 — a year that gave us such classics of the genre as Jawbreaker, She’s All That, Never Been Kissed, Varsity Blues, and 10 Things I Hate About You. This streak of films captures all of the teen pop culture tropes with a comprehensiveness not seen since the blueprint John Hughes reign of the '80s.

The '99 films have makeovers, climactic sports games, questionable gender politics, and cliques of geeks, mean girls, and jocks. Now 22 years later, in a world where teen movies still exist but are often splintered off by streaming services and seem less likely to have a lasting cultural impact, the films of the class of '99 have a nostalgic appeal that's undoubtedly enhanced by fashion. It's no secret that late '90s fashion, from crop tops to chunky sneakers, has made a big comeback with the Gen-Z crowd. You can see definite traces of the candy-colored, flirtatious ensembles of Jawbreaker and the lightly edgy teen-angst styling of 10 Things I Hate About You all over social media.

The fashions of all these films define their characters within the high school caste system. In Jawbreaker, the darkest film of the bunch, awkward student Fern Mayo (Judy Greer) is made over into an full-fledged fashionista, complete with a swanky new name (“Vylette”) after she witnesses the aftermath of a crime carried out by the vicious (but stylish) trio of school mean girls. Seeing Vylette in dress-code-violating hot pink ensembles recalls the famous ending of Grease, with the formerly prim Sandy (Olivia Newton-John) rocking shiny skintight black pants, an off-the-shoulder top, and red heels, on steroids. The style of Jawbreaker is made all the more subversive by how it plays on classic teen movie conventions with such a sickly sweet color scheme and self-consciously sexy silhouettes.

She's All That also features a makeover, as the wallflower Laney (Rachael Leigh Cook) gets the Pygmalion treatment. In the beginning of the film, she wears (gasp!) glasses and hides behind tomboyish outfits, even wearing baggy overalls. As the storyline progresses, she ditches the glasses (which, let's be honest, looked good and did not need to be abandoned) and starts wearing more typically feminine, form-fitting clothes, like the simple, low-cut red dress she wears in the somewhat infamous “reveal” scene. She may have a new look, but that shouldn't be a necessity for her to be liked by her peers.

Never Been Kissed takes a more humorous approach to the outsider trying to fit in, with Josie (Drew Barrymore) returning to high school as an undercover student in an all-white ensemble topped with a marabou-trimmed, lingerie-like jacket. She looks out of place, but we can appreciate the silliness of the look and the fact that her makeover isn't guided by a know-it-all guy but is rather an act of attempted personal redemption.

Varsity Blues is the most normie film of the group, with jocks in blue-and-white football jerseys and matching perky blonde cheerleaders. It's very all-American, but the most famous fashion moment doesn't even involve real clothes. In the film's most scandalous scene, cheerleader Darcy (Ali Larter) gets naked and dons a “bikini” made of whipped cream in a silly attempt at seduction. The scene has been parodied many times since, and as far as we know, the whipped cream bikini never became a trend and certainly isn't due for a comeback.

The DIY-bikini move is the kind of thing that Kat (Julia Stiles), the feisty protagonist of 10 Things I Hate About You, would probably laugh at. Kat isn't really a fashion plate. She's more likely to be seen in a camouflage tank and baggy pants than a mini dress. Her sister Bianca (Larisa Oleynik), on the other hand, wears floral-print dresses and pink cardigans, and delivers a flawless bit of fashion commentary when she says, “There's a difference between like and love. Because I like my Skechers, but I love my Prada backpack.” These days, you could probably find the Skechers she merely “likes” listed on Depop with a huge markup.

Looking back, it's easy to romanticize the time of the '90s teen movie boom. There was no social media to take over peoples' lives, the world-changing horrors of 9/11 had yet to take place, Donald Trump was just a sleazy businessman, and so on. The fashions of all these movies could today be confused for Gen Z TikTok posts or Pinterest boards. Fashion has always been cyclical and the styles of the late '90s — just ahead of the bling and glamor of the Y2K era — are popular again for their ease and playfulness.

For many young people, the style of the '70s and '80s might feel too costume-y and the early '90s grunge look might feel too sullen. Meanwhile, the late '90s mix of colorful femininity and tomboy vibes are seen as extra intriguing for being in the mainstream just before Gen Z was even born. It feels just right, and luckily, there's no shortage of fashionable teen movies from which to pull inspiration.