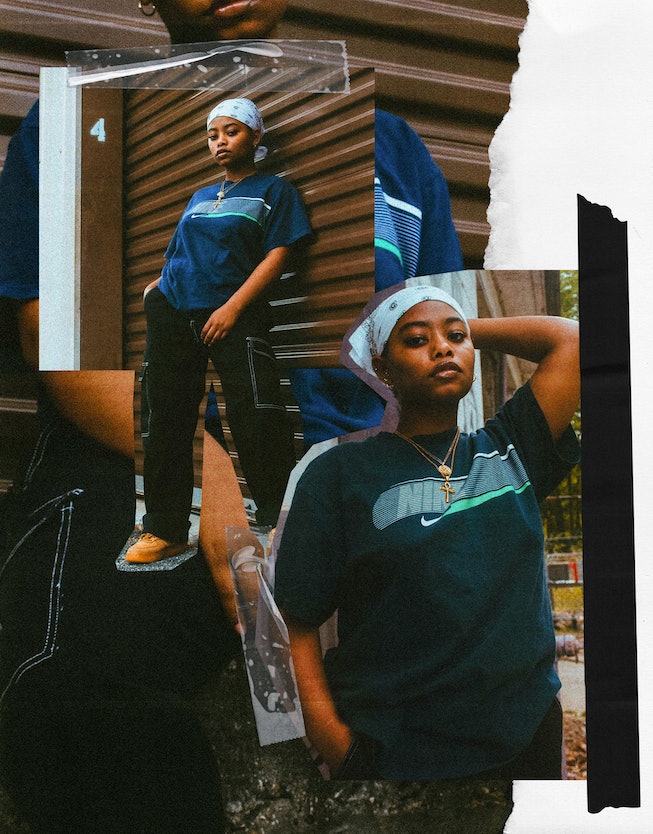 Chaotic filters and comically large overlay text characterize the YouTube video "SUMMER OUTFITS HAUL!! (FT. PRINCESS POLLY) *pinterest inspired*." Uploaded by Diana Ren in late May (and recently made private), the video and its ironic tone disguise the 19-year-old's styling savvy. Between ill-fitting song excerpts, we catch glimpses of an artist at work. As Ren nonchalantly pairs plaid skirts with crewneck sweatshirts, and mom jeans with cheeky, cropped lace tank tops, we learn that her teacher is an entity rather than a person — the entity being the lifestyle social media platform Pinterest.

Ren's decision to create the video was more stream-of-consciousness than calculated. "I was just scrolling on Pinterest one day and was like, 'Wow, these [outfits] are really cute, I wish I could dress like that,'" she tells NYLON. This act, however spontaneous, points towards a months-long trend that, like many, was brought about due to certain pandemic conditions. Type "recreating Pinterest outfits" into YouTube's search bar and you'll discover pages and pages of listed videos embracing this fad, most of which have surfaced within the last five months.

This phenomenon isn't exclusive to YouTube, as a hop over to TikTok and a search using similar keywords reveals just as many, if not more, posts sharing the same subject matter. While a stranger to Pinterest might not find anything out of the ordinary about this trend, longtime users might understand how this sensation marks a major turning point for the online platform.

Pinterest officially launched in March of 2010 as the brainchild of Silicon Valley's Ben Silbermann, Paul Sciarra, and Evan Sharp. Initially met with mixed reviews, the platform began to see brighter days when, according to Silbermann in a 2012 keynote speech, a Pinterest user organized a chain letter-like program called "Pin It Forward" where "bloggers would exchange pin boards about what home meant to them." Following the success of this program, the social media site experienced a steady increase in users and general interest. Over the next few years, Pinterest's user count would grow exponentially, and it would be praised as a social network service to watch by the media.

Although Pinterest quickly became a cultural marvel shortly after its release, its key demographic seemed to strictly include millennials and Gen Xers looking for DIY hacks, interior decorating tips, and wedding planning inspiration. Now, alongside Instagram, TikTok, and Snapchat, Gen Z is steadily starting to embrace Pinterest as well, primarily for its fashion prowess.

While Pinterest has experienced some slight variations in design and layout over the years, its core functionality has remained the same: You see a picture you like, pin it to a "board" of your choice, and then share these boards with those in your online circle. So why, as of late, are so many younger individuals, particularly young fashion enthusiasts, drawn to the platform, even going so far as to mimic popular outfits from the site?

For 18-year-old YouTuber Daisy Choi, the answer is simple: Pinterest stays on top of trends. "I feel like Pinterest is one of those apps where it grasps onto new trends the quickest," she says. "There's always new trends every single day, so you can just pick and choose which type of aesthetic you like."

Her sentiments seem to ring true; searching up any hot item on Pinterest yields a never-ending array of mirror pics and product shots that would coax even the most frugal of consumers.

Another plus? Its range. From Tokyo street style to minimalist wardrobes, alt girl to cottagecore, Pinterest makes the process of finding a new style effortless for its users. Rin Faith, a content creator and junior English major at Georgia State University, finds this to be incredibly helpful. "It's so diverse on Pinterest. If I wanted to look up 'black velvet slit skirt outfit' I could literally find so much outfit inspiration," she explains.

This gravitation of Gen Zers towards the platform comes as no surprise to Pinterest user researcher and stylist Larkin Brown, whose recent study on the demographic's usage exposed some surprising revelations: In Pinterest's second quarter of 2020, the number of Pinners under age 25 grew twice as fast as Pinners 25 and over.

Brown attributes this to a number of factors, one key being that Pinterest, in comparison to other social media platforms, does not rely on a model of external validation. You're essentially focusing on "me time" when you're on the site, and "not worrying about useless demands that can come with other social networking," as Brown puts it. "It's a place where you can be yourself, not project a sense of yourself for other people."

But what about these "recreating Pinterest outfits" challenges and its origins? Brown has an idea. The platform's shopping feature, which allows users to purchase the exact or similar clothing items from the outfits they are re-pinning, has become a hallmark attribute of the site, as it makes the process of obtaining your dream wardrobe that much more seamless.

"If we see people coming to Pinterest to recreate some of these outfits, it really fits in with how people engage with our shopping content. It means that Pinterest reflects more about shopping in-store compared to other platforms," remarks Brown. "So Gen Z, they're actively searching for visual inspiration of how to style different pieces, and they actually are looking for shopping inspiration, more so than the 25-and-older crowd."

If there was a "Pinterest Effect," it would undoubtedly be marked by the platform's ability to aid users in discovering and evolving their style. While Faith was once a big proponent of streetwear and more androgynous clothes, delving into the site's content has allowed her to broaden her horizons. "Since really honing in on Pinterest fashion, my sense of fashion has expanded to include sweet Lolita," she says. Ren echoes similar sentiments, "[Pinterest] has gotten me to be more creative with my outfits...I've definitely gotten more into actually coordinating outfits [and] layering."

Would it be too drastic of a statement to say that Pinterest can change lives? Maybe. For Choi, a high school senior, her love for the platform has, at the very least, given her some post-grad ideas. "I feel like Pinterest has opened up other career options for me because I've been a lot more interested in fashion now that I've been using Pinterest," she says.

However monumental or minuscule an impact Pinterest has on its individual users, it can be said with near certainty that the platform has made Gen Z's grand quest of finding themselves a little less burdensome and a lot more entertaining.

NEXT UP
Fashion
From Coastal Grandma To Indie Sleaze, What’s Your Summer Aesthetic?
Fashion
Teva’s New Sandals Are Destined to Be Your Go-To Summer Shoes
Fashion
The Popcorn Top Is The Latest Y2K Trend Making A Comeback
Fashion
How To Wear 2022’s Biggest Denim Trends, According To A Stylist