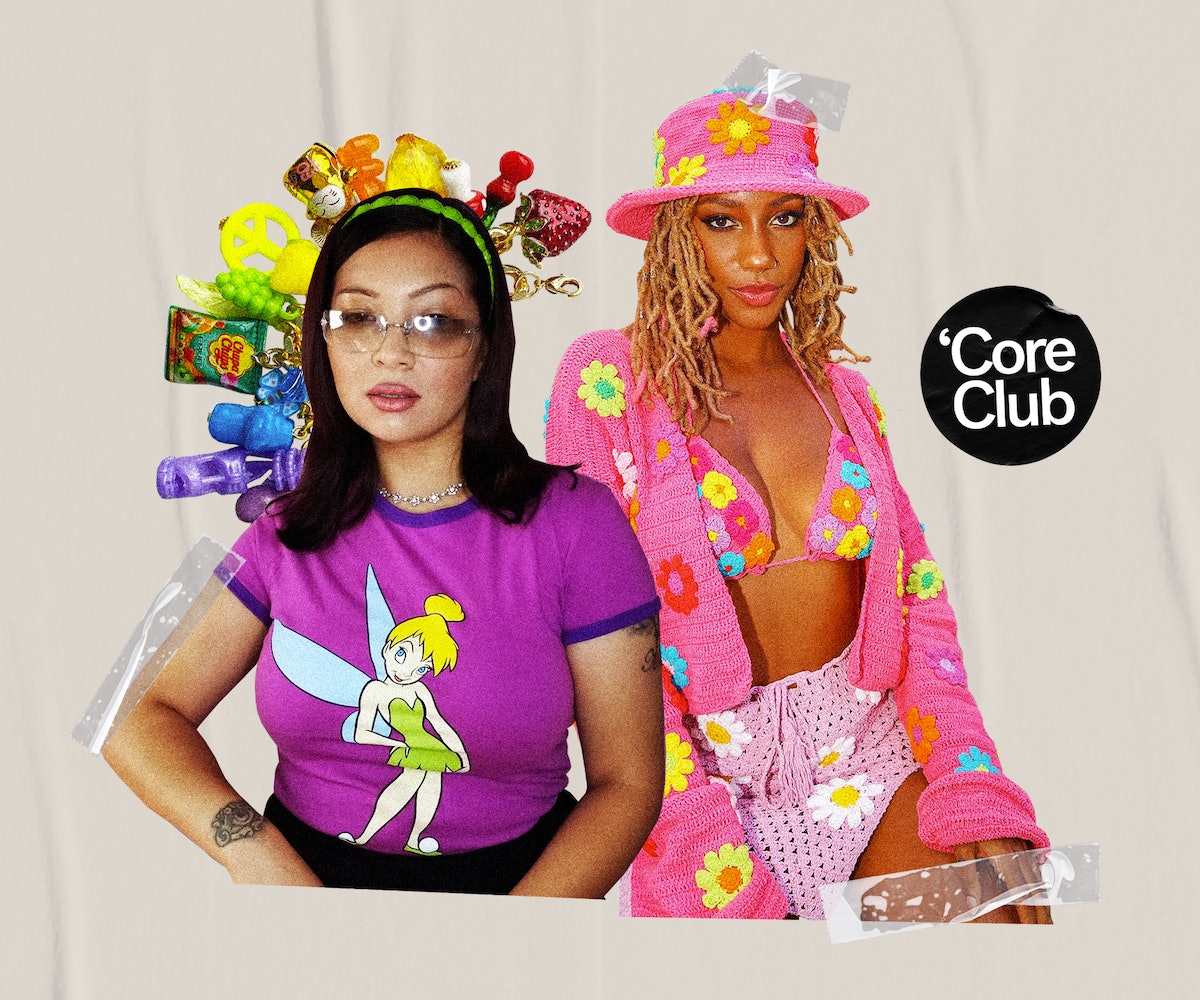 Whether it's a fashion trend on TikTok or a certain style taking over Instagram, internet aesthetics are always changing online. Our series 'Core Club breaks down the looks that you're starting to see a lot on social media and highlights the people and brands channeling it best. First up: kidcore.

While cottagecore has made everyone on TikTok and Instagram wish they were living deep in the woods, a new internet aesthetic is tapping into childhood nostalgia: kidcore. The rainbow-fueled color palette and toy-inspired style are bringing out the kids in all of us through fashion, and Depop shops, Etsy sellers, and indie brands alike are taking notice.

Piper Cashman and Amanda Adam of Zig Zag Goods specialize in clothes that channel “youthful motifs with a childhood essence” — think clowns, pattern clashing, the vibrancy of the '80s, frosting on a birthday cake, and smiley faces. “Kidcore is the best term to describe our brand,” the duo tells NYLON. “Through mediums such as flowers, pony beads, playful poems, acrylic paint, and vibrant color clashing, we create a Zig Zag universe that lets adults be kids and color outside the lines.”

Some of their favorite pieces invoke this charismatic and playful essence, like a bolero jacket with dangling colored plastic silverware as fringe, puffy paint blobs, and a cowgirl hat accented with feather boas, beading, felt lettering, and decapitated kewpie heads. The love for this trend runs much deeper than just a fad; for these creatives, it’s a lifestyle and a sign of hope. It ties into being confident in who you are, no matter whether it causes strangers to turn heads — in fact, this reaction is encouraged.

“The art of kidcore is contagious,” says Adam. “Piper and I created this world where it’s OK to have paint smears on your legs and clothes, where every fingernail is painted with different polish, where outfits aren’t complete until every color of the rainbow makes an appearance.”

Even though they’ve championed Zig Zag Goods’ style for a long time, they did notice an uproar of publicity since quarantine started back in March. ”People started gravitating toward this dream sequence because the dark, grim reality behind their windows was nearly unbearable,” Cashman and Adam explain. “Getting glimpses of childhood seems soothing.”

Anna from Chicago runs a Depop shop called ChinaDollSauce, filled with nostalgic, quirky, and unusual pieces. For her, the kidcore aesthetic is about having fun with prints and colors and dressing how you want without putting any mind to fashion rules. “No mixed prints or no mismatching? That's so boring,” she says.

The inspiration behind Anna’s shop comes from the movies, music, and TV shows from the '90s and early 2000s that she grew up on. If you’re looking to get in on the kidcore trend, Anna recommends items like a digital Lizzie McGuire watch, a Skittles shoulder purse, and her shop’s upcycled stuffed animal purses. “I've had this drive to keep pumping out more and more of my thrifted finds with cartoon graphics, nostalgic prints, and fun-colored pieces that stand out — pieces that would remind you of your youth,” says Anna, who also promotes her shop on Instagram and Pinterest. The latter has noticed a jump in “kidcore aesthetic” pins specifically by 19 times in year-over-year searches. Meanwhile, according to Etsy, searches for “kidcore” increased 2,439% in the three months ending with September compared with the same period last year.

Lulu from Brighton, England, is a 28-year-old whose childhood dream of becoming a fashion designer led her to start her brand, Fluffy, in 2014. “I would hand-make everything myself in my mum’s dining room,” she tells NYLON. “It wasn’t until my first crochet collection in 2017 that my brand really started to grow, and from then it's just become a dream come true.”

With inspirations ranging from music festivals to the '90s, Fluffy’s most signature designs are its colorful crochet pieces, featuring groovy retro flowers, checkerboard prints, and smiley faces. “Crochet wasn’t really cool for years,” says Lulu. “Most people associated it with grandma’s living room, like crochet blankets flung over the sofa, but I think I’ve helped make it cool and wearable. I love that this trend is so popular now.” (Indeed, crochet as a fashion DIY challenge took off on TikTok over the summer, thanks to Harry Styles’ patchwork cardigan.)

Fluffy has experienced some serious growth on its own as well after being worn by K-pop group Blackpink in their music video for “Ice Cream” with Selena Gomez. Speaking on that dream collaboration, Lulu recalls getting an email from Blackpink’s team and sending around six outfits to Korea. From there, all four members ended up wearing Fluffy in the music video and promotional shots, and the brand arranged a giveaway of their exact outfits on Instagram. The announcement post has garnered huge engagement — more than 29,500 likes and around 56,000 comments.

Another viral trend incorporating elements of kidcore and K-pop is “Hobicore,” an aesthetic inspired by J-Hope of BTS. Based on Hobi’s vibrant personality and personal style (and his love for Takashi Murakami's artistic flowers), ARMYs around the world seek comfort in emulating this aesthetic in their own creative ways, whether it be through retro fashion, rainbows, smiley faces, or radiant positivity. Several Etsy shops feature fanmade pieces: ShoesByCami's custom Hobicore-inspired Fila Disruptors are painted with rainbows and the phrase “Hope!”; studiobangtan has colorful beaded bracelets; lileuphoriapins offers a Y2K-meets-hobicore PVC bag; and moonikosmos sells both accessories and shoes that fit the aesthetic.

Kidcore has been apparent in Blackcurrant Pop’s charm jewelry since before the aesthetic took over social media (and before it was named the next big fashion trend). Designer and founder Beth labels her brand as “primary chic” while banking on nostalgia. In addition to its coveted stock of necklaces and bracelets, adorned with candy and fruit charms, gemstones, mushrooms, yin-yang signs, and more, Beth recently launched shoe charms to accessorize your Doc Martens and Crocs.

“We draw from a wonderful childhood filled with adventure and happy times, and our designs reflect that,” she says. “From gummy bears to butterfly clips, they transport you straight back to childhood, listening to Britney and collecting '90s treasures, like Pokémon cards and jelly shoes.”

For Beth, the meaning of kidcore is more so an act of liberation than an odd fad. “It’s rebellion against the continuous sexualization and minimalist images that have defined the fashion world for so long,” she explains. “With all the uncertainty happening that we can’t control, sometimes you simply need to embrace things that make you feel good and give you that childlike feeling of security and happiness, and kidcore is the perfect fix.”

Behind the bright colors, kiddy themes, and nods to subcultures like candy ravers, at the heart of kidcore is the desire for beauty and better times in a confusing world. Whether it be through eye-catching jewelry or the old cartoons that have always brought us joy, the kidcore aesthetic is one of the most wholesome internet trends yearning for better times.

NEXT UP
Fashion
R&B Artist María Isabel Is Making Room For New Style With Nuuly
Fashion
Telfar Thinks You Need An It Wallet To Go With Your It Bag
Culture
On The List (With Melissa Rich): How To Throw The Ultimate Apartment Party
Culture
Loewe’s Howl's Moving Castle Collection Is An Anime Dream
Style + Culture, delivered straight to your inbox.