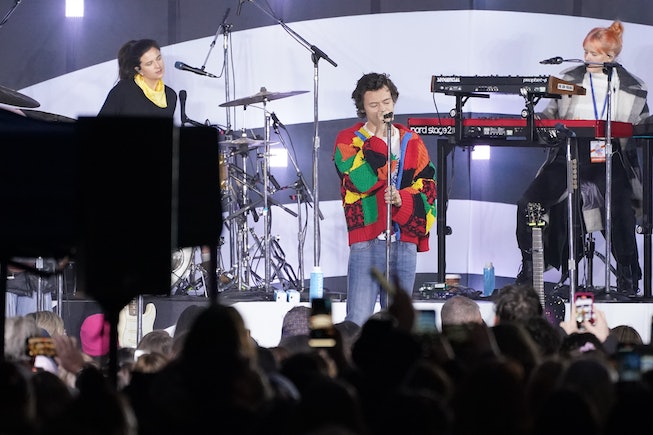 Editor's Note: This article has been updated to include JW Anderson's response to its viral cardigan on TikTok.

The latest trend to take over TikTok's For You Page combines DIY fashion with Harry Styles fandom. Recently, crochet enthusiasts on the platform have taken on recreating the singer's patchwork cardigan, which he wore during a rehearsal for his live performance on The Today Show back in February.

The rainbow-colored knitted garment is by JW Anderson — specifically from designer Jonathan Anderson's Spring 2020 men's collection — and taps into fashion's newest "craftcore" subculture. Plus, with a price tag of 1450 euros (about $1,630), it's no surprise that TikTokers are handmaking their own versions. Luckily, the results are very impressive.

Liv, who lives in Los Angeles and is known for her extreme beauty looks, put her "mediocre crochet skills to the test" by creating a knockoff of Styles' sweater. The time-consuming project is one of her best works yet, she says in her video, which already boasts more than two millions views since she posted two days ago. Meanwhile, Katelin, a college student, attempted to DIY Styles' look and her version is strikingly similar to the original, complete with houndstooth-printed patches. (After a flood of requests, she posted a separate and super informative video tutorial.) An unidentified Harry Styles fan also crocheted her own cardigan, which seems to still be in the works since the most recent TikTok only includes a few patchwork squares made until more supplies arrive. Until then, we'll be eagerly anticipating the final results.

As a response to the cardigan's virality on TikTok, JW Anderson is offering the knit pattern for those who want more direction on achieving this DIY cardigan. You can visit the brand's website and send an email, which will be replied to with a PDF of the pattern.

"I am so impressed and incredibly humbled by this trend and everyone knitting the cardigan," said Anderson in an official statement. "I really wanted to show our appreciation so we are sharing the pattern with everyone. Keep it up!"

See the more of the DIY TikTok videos, below, and don't be surprised if you find yourself ordering a crochet starter kit sometime soon.