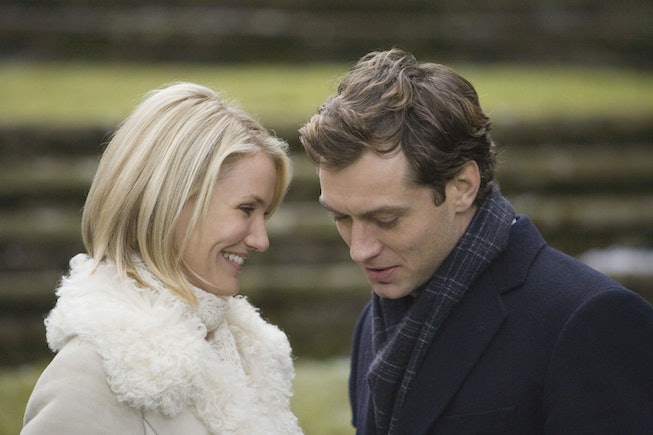 The holiday season is a time for coziness, and while there's a canon of holiday films going back decades, it's quite possible that Nancy Meyers, the beloved writer/director of The Parent Trap, Something's Gotta Give, and It's Complicated, among others, is the queen of cozy cinema. Even these non-holiday movies feel like holiday movies, with their overarching sense of escapism via idealized homes and privileged problems that lovingly envelop you like a weighted blanket.

It's only fitting that she made a literal holiday movie, the rather unimaginatively titled The Holiday, in 2006. With its fairytale-like plot of two women, one in Los Angeles, one near London, who swap houses in the midst of a holiday season filled with romantic upheaval, The Holiday is seasonal rom-com comfort viewing at its finest. As is always the case in Meyers' films, there's no shortage of tasteful, neutral-toned clothes. Meyers is the auteur of cream-colored turtlenecks, and the fashions of The Holiday establish the protagonists as subtly stylish young professionals who dress in such a way that is both aspirational and fairly easy to emulate.

The real fashion narrative of The Holiday is a classic fish-out-of-water tale. When Amanda (Cameron Diaz) arrives in snowy Surrey from sunny LA, she wears a shearling-trimmed coat, skinny jeans, sunglasses, and heels. Anyone who sees her would automatically know she's a tourist — the outfit is the ultimate cliché of what an LA resident would wear in the winter. There's no need for sunglasses, and, of course, she has trouble walking through the snow in her pointy, glamorous shoes. Even her shearling coat, the most ostensibly practical part of her outfit, isn't going to protect her from the elements nearly as much as say, a down coat would. The piles of suitcases she carries suggest she over-prepared for her trip, yet the outfit she wears doesn't work for her surroundings.

Once Amanda settles into the cottage, her style quickly shifts away from LA slickness. On a trip meant to be an escape, she embraces comfort and tries to get used to the cold, wearing a white fisherman-style sweater, a beanie, a scarf, and mittens while lounging in her quaint new surroundings. Meanwhile, on the other side of the pond, Iris (Kate Winslet) settles into Amanda's comparatively palatial house in a pair of old-fashioned pinstriped pajamas.

Both characters make stay-at-home wear (the most relevant category of fashion these days) look covetable. There's not a single ratty oversized T-shirt or pair of leggings-as-pants in sight. Amanda, the more outwardly fashionable of the two women, wears a cream-colored robe and cream-colored pajamas while eating a bowl of fettuccine alfredo. The outfit and the food are perfectly harmonious — everything is pale, soft, and warm. The Holiday may have been released before Instagram was a thing, but Amanda could easily be an influencer. When she's relaxing in the cottage, she looks both effortless and expensive. Like Diane Keaton in Something’s Gotta Give or Meryl Streep in It's Complicated, she wears white with abandon. These characters don't worry about stains or wrinkles, which is honestly the height of luxury.

Part of what makes Meyers' female protagonists so appealing is the fact that they don't dress in an outwardly sexy way. They dress for themselves, in outfits that are quietly elegant. All the sweaters and pale shades are preppy but not stuffy. There's an enviable air of ease, a sense that everything is made to stand the test of time.

During the final scenes of the film, Amanda and Iris, who both end up finding love and comfort, wear formal black dresses. It's a departure from Meyers' typical palette but the dresses are still subtle and timeless. In a holiday season when most of us are stuck at home, the fashions of The Holiday are extra desirable. A tailored coat or cashmere sweater or little black dress feels like it could pull us out of the winter quarantine doldrums, and a good pair of classic pajamas seems like just the right thing to splurge on.