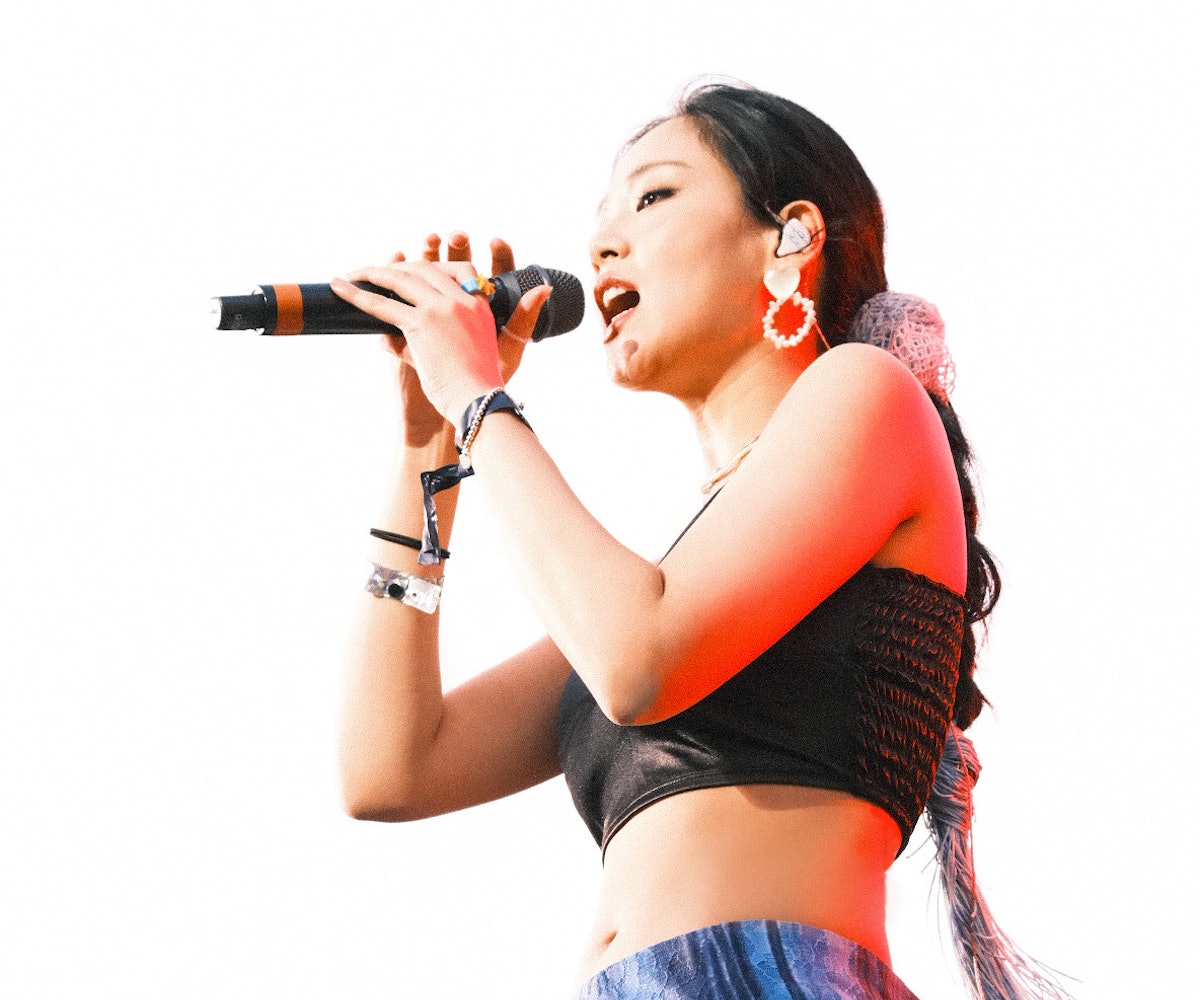 Alt-R&B K-pop artist BIBI is undoubtedly one to watch out for. After placing in second on the singing competition show The Fan in 2018, she shortly signed with Feel Ghood Music and made her debut with “BINU.” In just two years, the 23-year-old singer-songwriter has become known for seamlessly intertwining both English and Korean in her lyrics, while experimenting with catchy melodies and eccentric music videos.

On Sunday, Nov. 7, the Korean musician achieved yet another major milestone in her career, performing some of her popular songs at 88rising’s 2021 Head In The Clouds festival, including her newly-released single “The Weekend.” The singer dazzled on stage, opting for a matching periwinkle mesh set from Korean fashion label Expired Girl, along with knitted hair accessories braided into her hair and diamond jewelry pieces. “I think in terms of vibes, I want to look ‘fresh,’ but also I want to be sexy and show some skin, but still classy,” says BIBI.

When it comes to being an artist and even with her fashion taste, she says genuine self-expression is key: “My full stage name is nakedbibi, so even though I wear clothes, I still feel naked. And for me, naked means being honest even through my fashion. I want to express myself, not hide.”

BIBI spoke exclusively with NYLON about her performance at Head In The Clouds, her new single “The Weekend,” and more, ahead.

Yes, it’s my first time here. I’ve always dreamed about working in L.A., so this is quite unbelievable and amazing to me. Since I’m in L.A., I’m excited to make friends and hang out a lot, and especially go to Disneyland and Universal Studios. We’re here for a week which isn’t a long time, but we’re trying to get it all in.

How did you prepare for your performance?

I didn’t have much time, but a lot of that time was spent preparing through visualization and also selecting what songs to perform. I don’t know the audience, and this is my first time in L.A. and my first festival and a huge one at that. I think I might faint that day!

I’m going to perform ‘The Weekend,’ and this is my first time performing a full song in English so I’ve been preparing a lot these days. It feels like I found a new me in that song. I’m also going to sing “Cigarette and Condom,” and I hope everyone sings along with me because it’s an easy one to follow.

What's your favorite line from “The Weekend”?

I really like the first two lines of the song because even though I’m not a native English speaker, it feels like my language: Bаrbіе wаnnа раrtу lіkе аll nіght/ Аnd ѕhе lооkіng lіkе а zоmbіе іn hеr Off-Whіtе.

Do you have any pre-performance rituals that you usually do?

I do a lot of breathing exercises, and I make sure I eat at least three hours before the show because I can’t sing when I’m full. I don’t know the specifics of breathing techniques per se, but it’s necessary because I feel like I'm going to die if I don't do it. [Laughs]

How would describe your style and how has that evolved since your debut? What are some of your favorite "go-to" pieces this season, and while you're in L.A.?

My full stage name is nakedbibi, so even though I wear clothes, I still feel naked. And for me, naked means being honest even through my fashion. I want to express myself, not hide.

Recently, I’ve been wearing a lot of pieces from Bottega Veneta. I’ve also been wearing skirts, even though I wasn’t a fan of them at first, but now they’re so comfy to me.