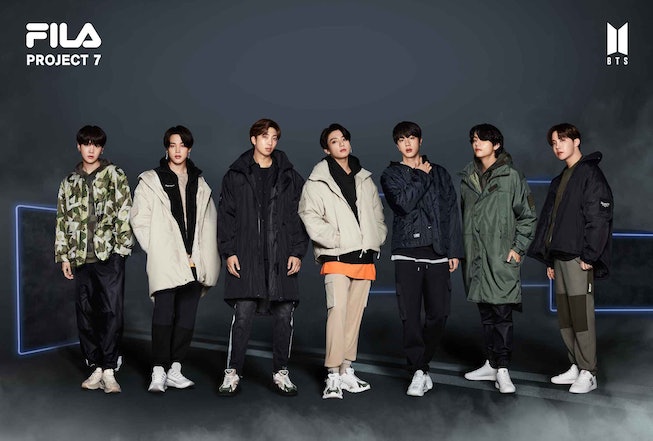 It's a good day for BTS fans. (Though, when is it not a good day to be a BTS fan?) The K-pop group's collaboration with Fila is finally out, ranging from tees, hoodies, and cargo pants, to fleece zip-ups, parkas, and quilted jackets. There's also a good amount of accessories available, too, like roomy totes, utility belt bags, and four different sneaker styles in cool neutral tones.

BTS' seven members signed on as global ambassadors with Fila back in October, making Project 7 their latest collaboration and campaign with the sportswear brand. The collection took heavy inspiration from utilitarian and military styles, which may or may not have been a nod to the looming threat of the band losing its oldest member, 27-year-old Jin, to the South Korean military. Typically, all men in South Korea must enlist in the military for 20 months by the time they turn 28. Jin's 28th birthday is this Friday.

On Tuesday, South Korea's Parliament announced that it had passed a law that would allow top K-pop performers to delay their military service until they're 30, meaning Jin is in the clear to perform and model more Fila collabs for another two years.

Project 7 is available now on Fila's website, with prices ranging from $17 for accessories to $220 for outerwear. Check out group's campaign images below.

NEXT UP
Culture
Loewe’s Howl's Moving Castle Collection Is An Anime Dream
Fashion
Collina Strada & Vans Team Up For A Chiller-Friendly Collection
Culture
The Cutest Couples At The 2023 Grammys
Fashion
Jenna Ortega Is The Face Of Adidas’ Newest Line
Style + Culture, delivered straight to your inbox.